So today has been a day of relaxation in Louisville, Kentucky. Last night we met up with our friend Kody, who I believe recently moved to the area from Lexington. This morning I woke up and I was still feeling sniffly and stuffy from the cold-I-don’t-have. Not to be deterred by this, I decided that I was going to evict the cold-I-don’t-have by sweating the bastard out. I achieved this through walking.

I walked from downtown Louisville to an area I believe is called the Highlands. I did this via a neighborhood called NuLu. NuLu looks like it’s rebuilding itself to a former glory, whereas the Highlands (Bardstown and Baxter) is fully of locally owned eateries, pubs and cute little shops. 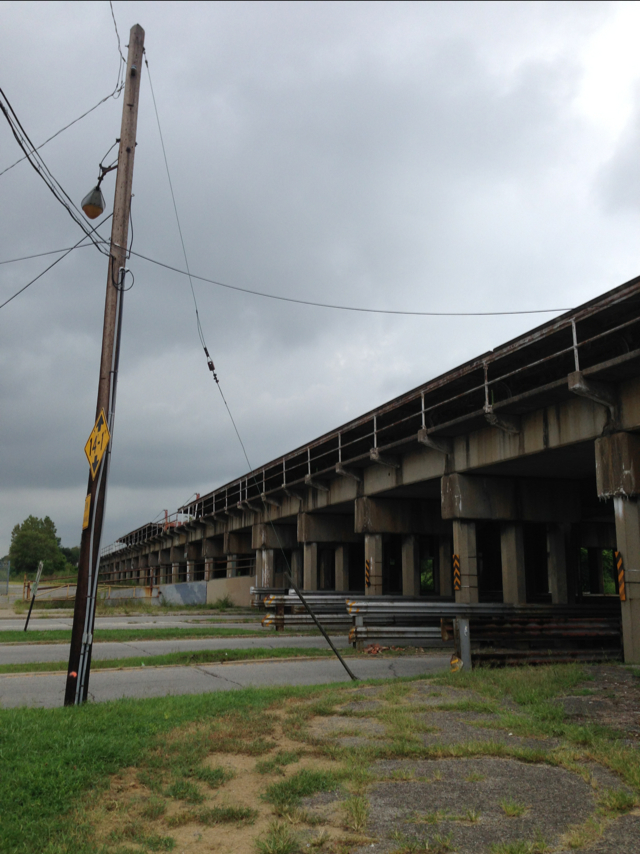 I walked the 3.1 miles from the hotel to the nearest Starbucks, where the fever-I-didn’t-have apparently broke. I felt 500% better but I was sopping wet. Hoping I didn’t look like a homeless person, I ordered a bottle of water and an unsweetened green tea and quickly chugged them down. Even though I didn’t have a cold, I felt victorious because I suddenly felt like my normal self again. The bonus of this cold I didn’t have is that my voice is really deep right now. I sound like Barry White but without the panache or hit singles that were remade by Taylor Dayne. If I tried I could sound like Taylor Dayne but usually I end up sounding like Anastacia.

Earl and Kody opted to drive (as they thought I was nuts to walk that much) and they met me for lunch, where we went to Wick’s Pizza Parlor and Pub. 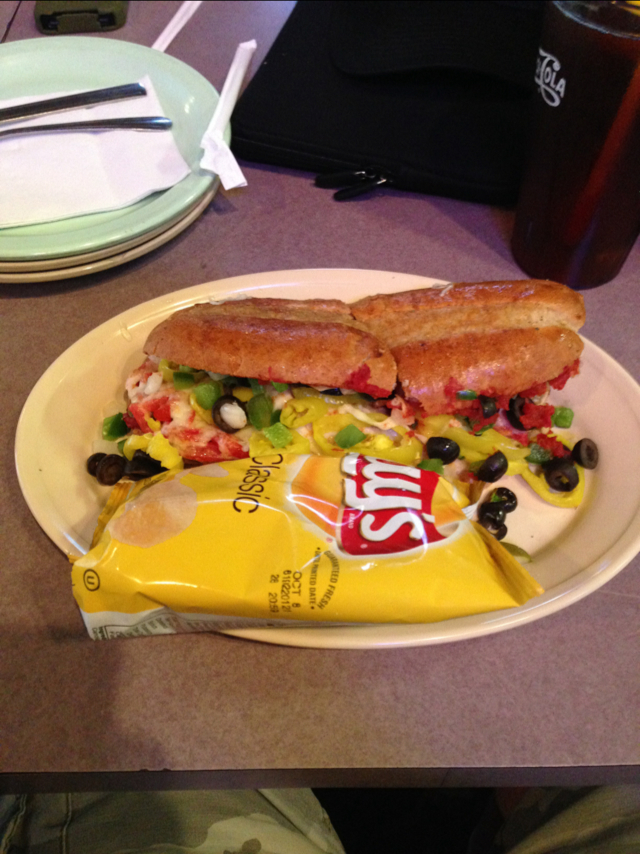 One thing that occurred to me during lunch, and this was obviously because I was feeling better than I was before, was that we hadn’t had any pie or any sort of dessert along this trip. We rectified that with a stop at the Homemade Ice Cream and Pie Kitchen, where I had Chess Pie for the first time in many, many years. 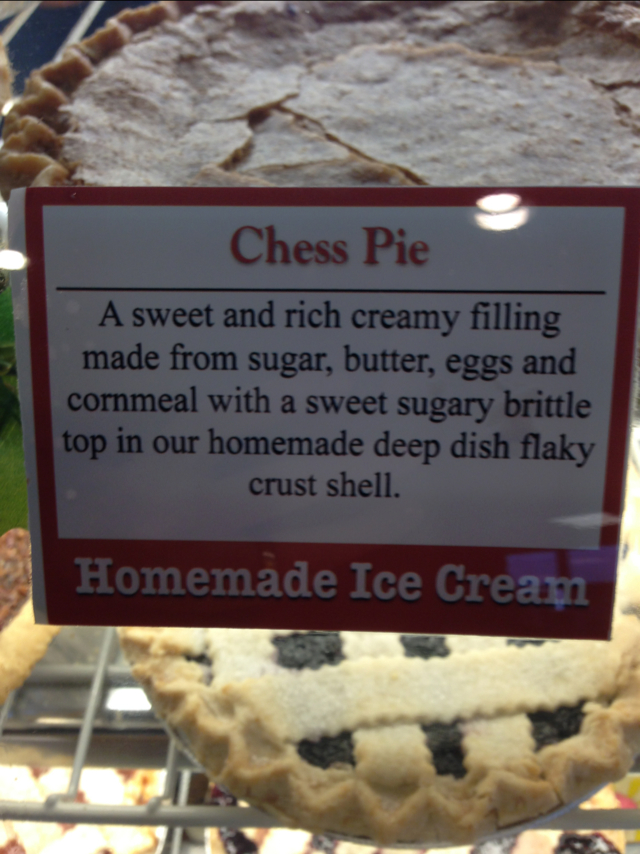 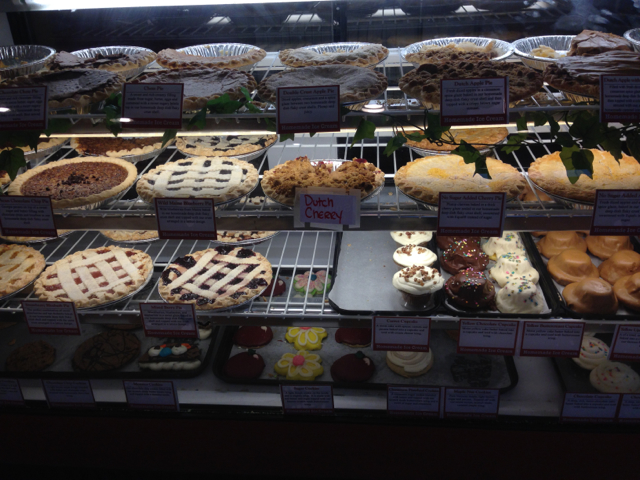 Another thing that I had not accomplished yet was a visit to a local barbershop for a shave, which is something that I enjoy from time to time. I ended up going to the Derby City Chop Shop, which was highly recommended by all things electronic. I wrote a review of the experience on Google+. 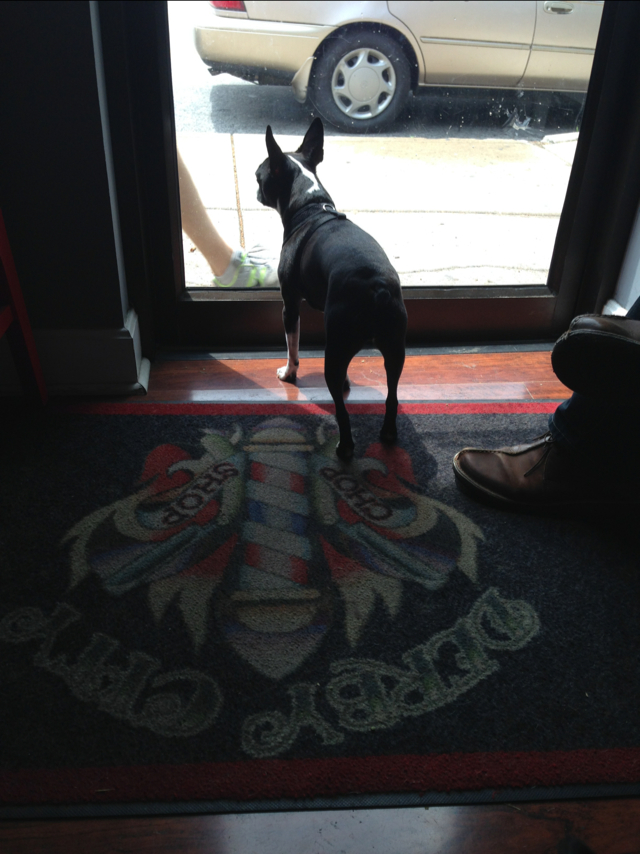 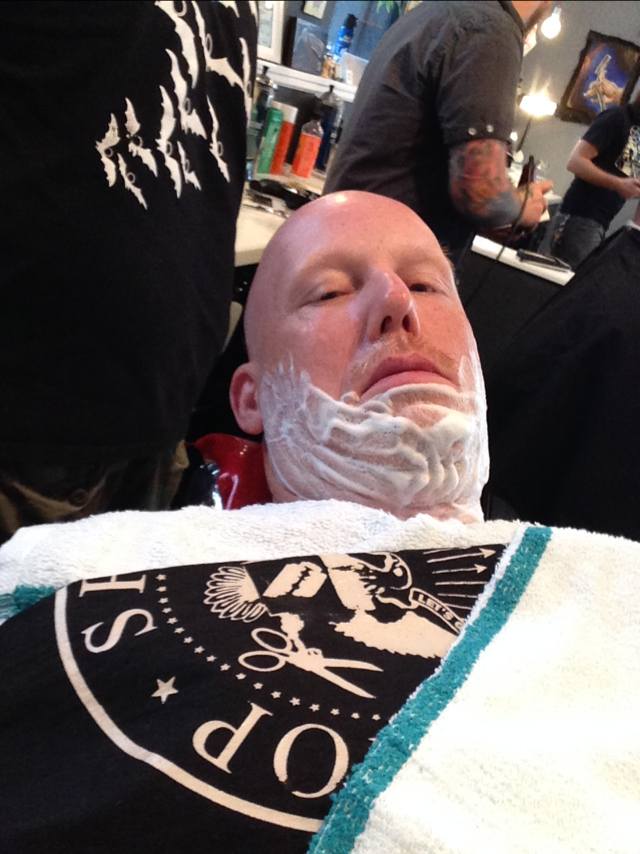 Foaming at the mouth.

It was a long wait but that was a beautiful thing, because I got to get a feel for the local flavor and it was quite a nice vibe. 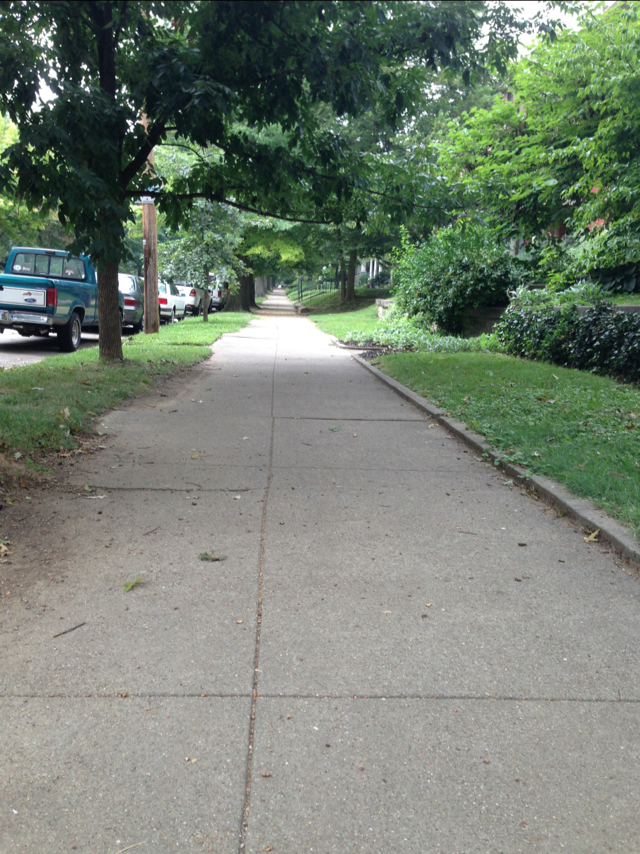 After my chop shop experience (and no loss of blood), Kody and Earl decided to drive back to the hotel but I declared I would walk back, after all, why settle for 3.1 miles when you can walk 6.2 instead? Still feeling fantastic, I walked back to the hotel where I again sweated like a pig. On the way back, I passed a shop in NuLu that had this on the front wall of their building. 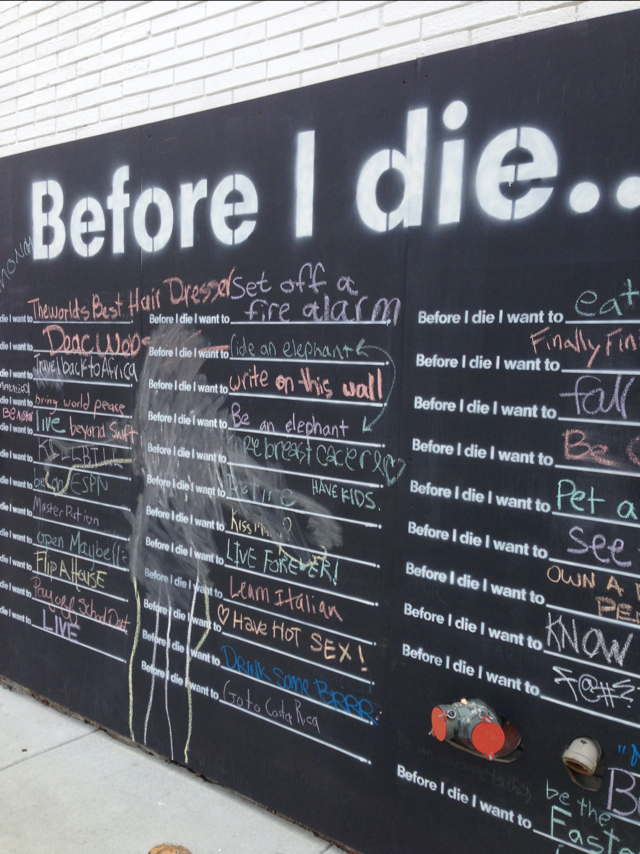 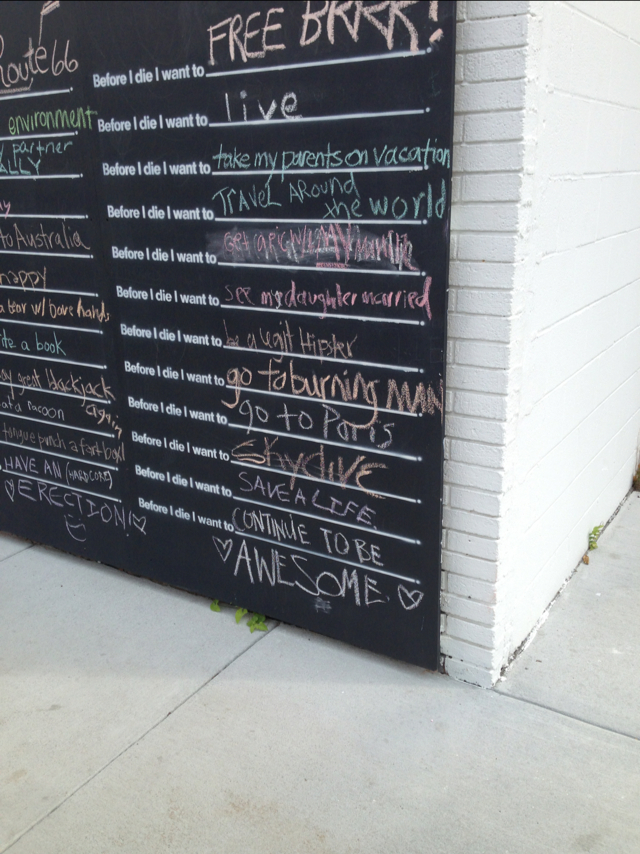 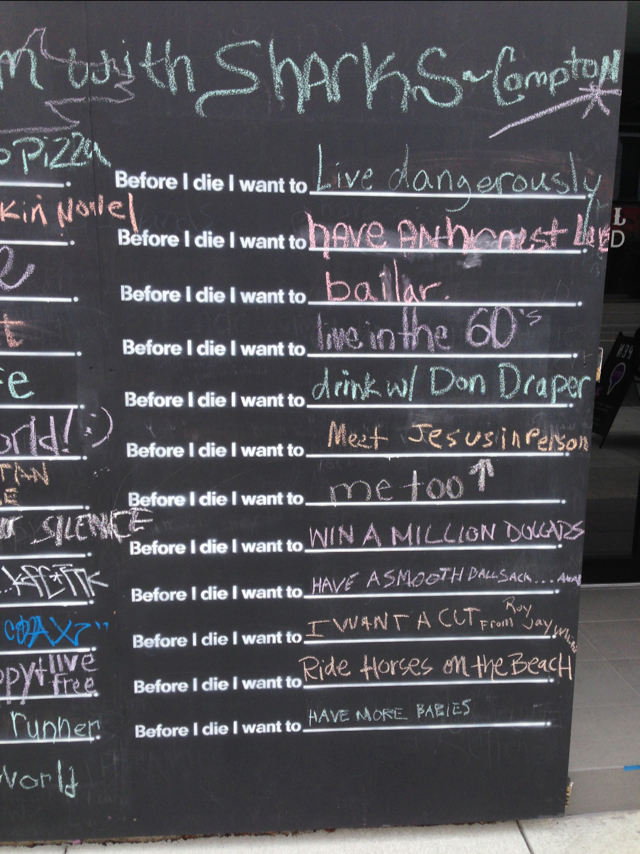 Documenting your dreams is a beautiful thing, whether you say them silently and toss a coin, repeat them every night before going to bed or write them on a chalk board on a storefront in Louisville, Kentucky.

After you document the dream you have to go chase it. While still feeling inspired, I spotted this whiteboard in another store front. 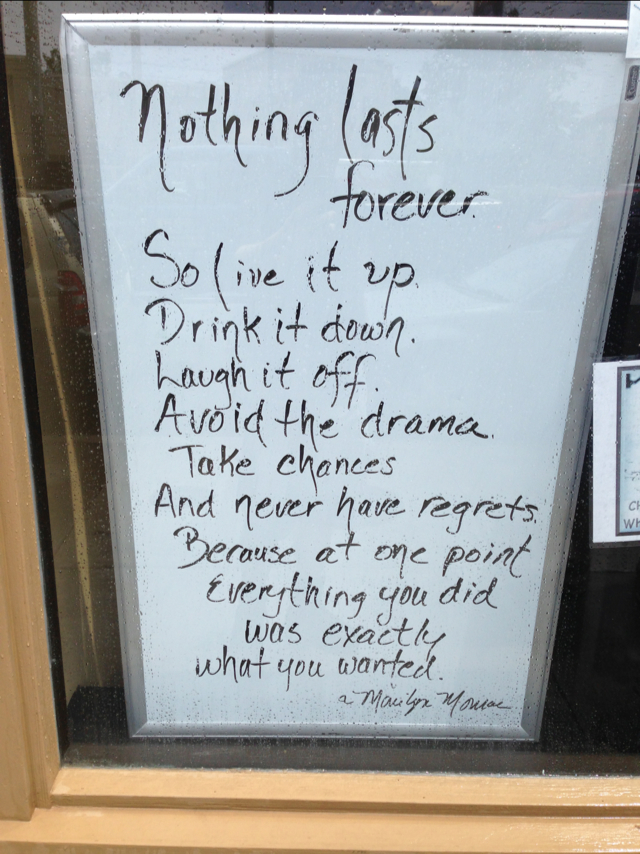