I wrote the following around 1:30 p.m. this afternoon.

The time is near. We know that. No longer able to walk, you still seem grateful when we carry you. You’re no longer interested in food, you just want to rest. You have always loved laying in the sun, so I take you out on the porch and set you down on your favorite spot. I block off the porch entrance so you don’t mistakenly fall down off the porch.

I look at you and blink my eyes slowly, you do the same in return. You can barely breathe, but you’re purring. I sit by you, my eyes are filled with tears. You put your paw on my hand. I sit with you like that for a long while. You seem at peace.

You put your head down and take a nap. I rearrange myself to be comfortable and still productive at work. I’m watching you. I’m making sure you’re enjoying your time in the sun.

Our cat Tom is over 18 years old. He’s struggling and last night it appeared that he was no longer able to walk. I made him comfortable before I went to bed; he had hidden himself behind the entertainment center in the living room. His breathing was steady but he was wheezing.

Earl and I had come to the decision that if it was at all possible, we would give Tom the dignity of passing on at home. He __hates__ going anywhere in ways that I have never seen a cat hate something before. He loses his mind completely in the car. The idea of taking him to the vet when he is obviously in his final days tore us apart. As long as he wasn’t in pain or some other awful distress, we would make him comfortable and give him the opportunity to pass at home.

Tom couldn’t walk this morning. He’d stand up and fall right over on his left side. He yowled when this happened. Earl and I met for lunch and had the conversation. We didn’t want to see him suffer and Earl would contact the vet to make arrangements.

Earl couldn’t get through to the vet.

I came home from lunch and found Tom laying on the mat I had set up for him. He was sleeping. His area was in the front living room; he had managed to get to the middle of the room to pee and then he had gone back to the mat. I figured he had crawled on his front paws. As I walked by him, he felt the breeze of me passing by and looked at me. I looked back at him and decided that it was a beautiful day and since he loved laying in the sun so much, I’d set an area up on the front porch so he could sun bathe, probably for the last time. 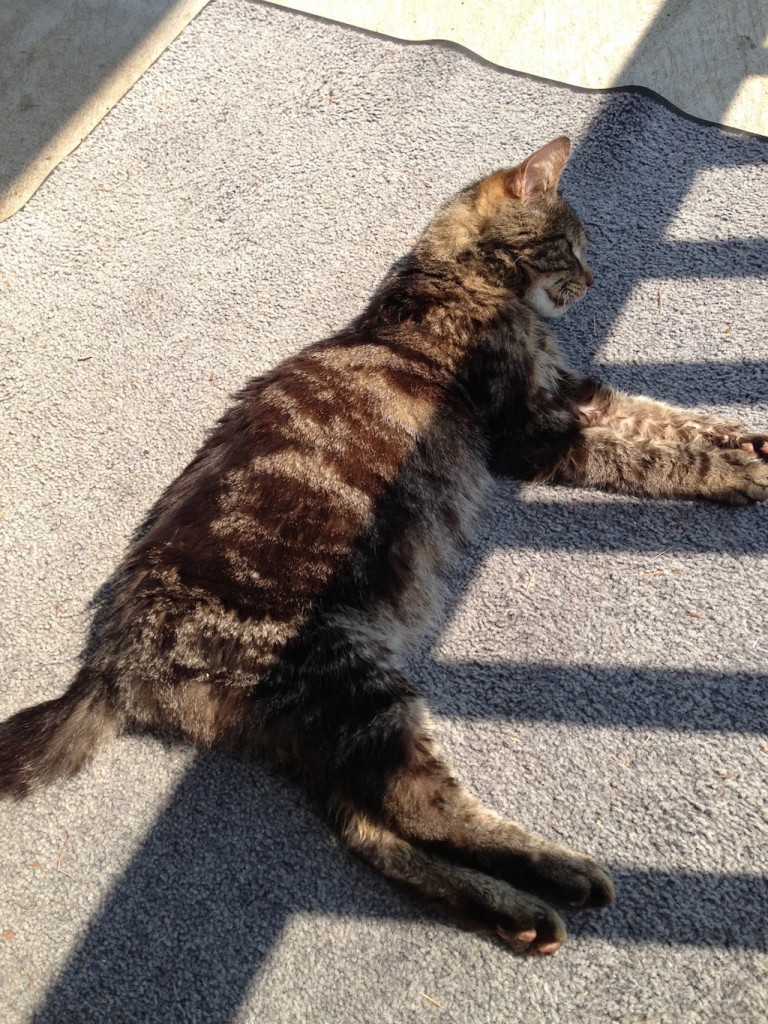 Nervous about leaving him on the porch unattended, I sat with him, where he put his paw on my paw in an obvious gesture of comfort (for whom?). He purred. He gave me the eye blink. I sat on the porch with him, tears streaming from my face, telling him that we loved him and that he was OK to do what he needed to do. 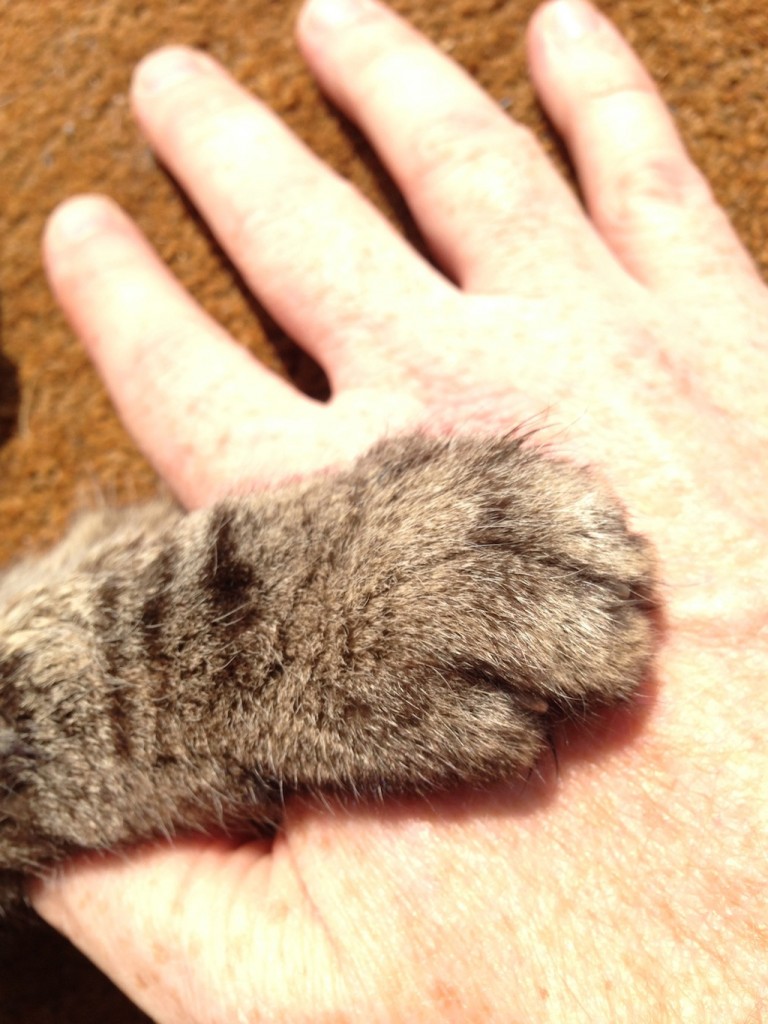 Being careful as to not neglect my work duties, I grabbed my work laptop and wrote code sitting where I could keep an eye on him while he settled in for a nap in the sun. This worked well until I had a conference call. I decided to bring him inside and rearrange the mat in a sunny spot in the room while I went downstairs and participated in the call for work.

An hour later when I came upstairs, the mat was empty. He had gotten himself to the kitchen and had found his typical afternoon sunny spot on the floor in front of the patio doors. I figured he’d pulled himself there by his front paws since his back legs weren’t working.

As I walked into the kitchen, he stood up. He was very shaky and very tentative, but his tail went up in the air and he walked over to me. I stopped so that he would have the dignity of walking to greet me as he intended. It took a little longer than usual and he wobbled a bit, but he walked over and sniffed my foot. He looked up and blinked.

Earl never got through to the vet, so no arrangements have been made. I think Tom has told us not to count him out yet. He’ll go when he’s ready and not a moment before. As I type this, he’s arranged himself into a comfortable position.

He’s enjoying another moment in the sun.