This morning I woke up with a stuffy nose and some sneezing action. I was so excited about this trip that apparently when the awesomeness ensued, my body relaxed and finally said, “you need a break, bud”.

The only thing on the agenda today was driving. 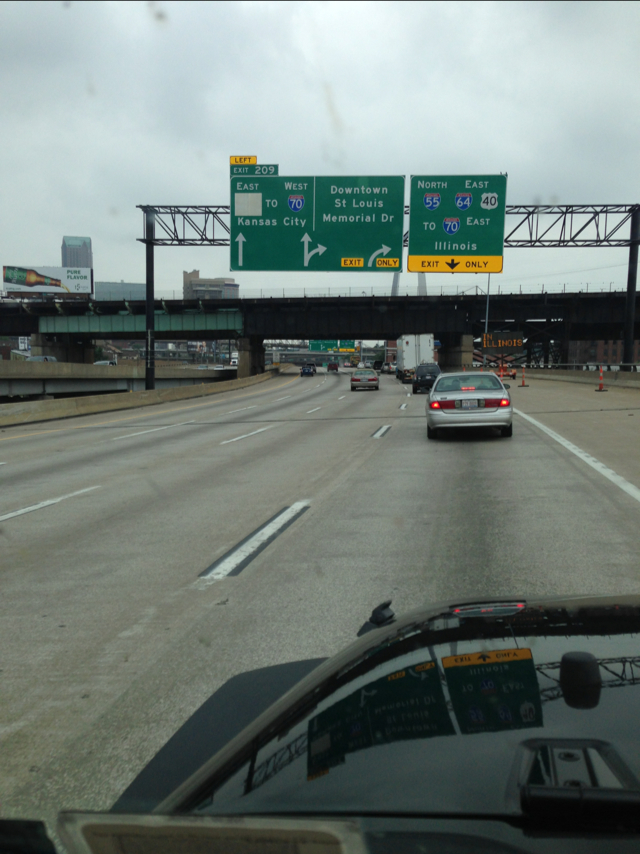 The plan was originally to take a ride along the northern part of Arkansas through some pretty nifty scenery (and a bunch of Mayberry like towns), but that route was all flooded out from the frivolity of last night’s thunderstorms. So Plan B it was and we ended up driving the entire route via Interstate. (For those keeping Interstate BINGO, we rode Interstates 540, 49, 44, 55, 64, 264 and 65).

Once we hopped onto I-44 in Joplin, Mo., we were retracing a ride we had taken years ago in the first Jeep. In fact, I pointed out to Earl the Hampton Inn that we stayed at in Lebanon, Mo. He said I was crazy. I told him that I am absolutely crazy, but I knew that we had stayed at the Hampton Inn on a foggy night. Then I refrained from saying “neener neener” when I confirmed it via this blog entry.

We did a very small bit of exploring on old US 66 and found ourselves at the Route 66 Diner. They have a clock there that looked very familiar. 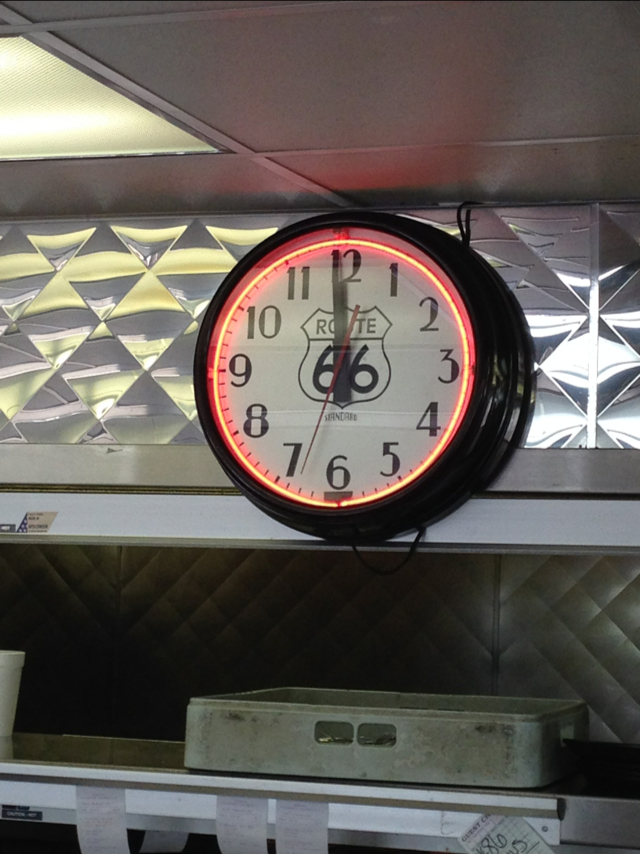 Apparently we were near Fort Leonard Wood, as we found ourselves surrounded by men and women in their ACUs. I have to admit, a man in his ACUs will always get my attention.

Since we were at a diner that featured homemade soup, I ordered chicken soup for my soul (but not the book) and to help my sniffles. It was delicious. 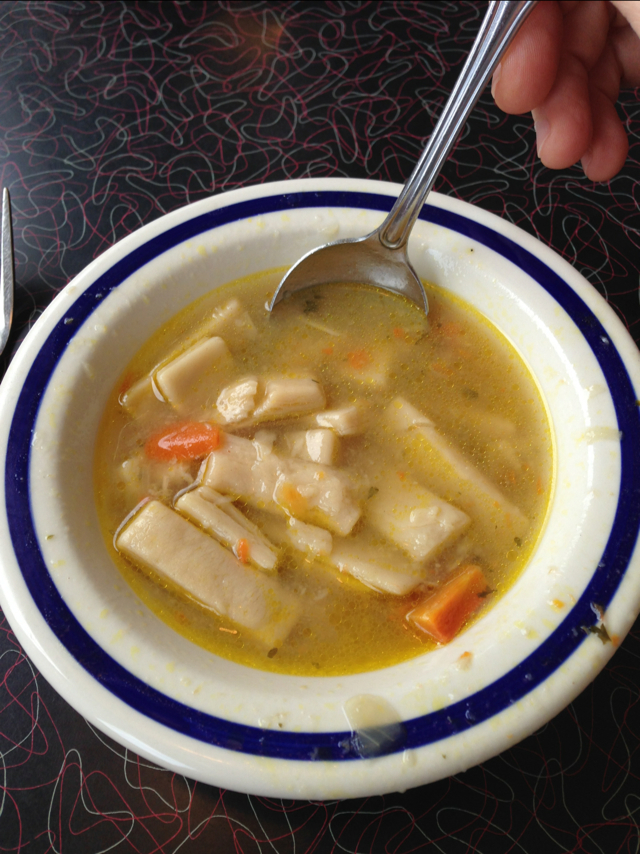 We drove quickly through St. Louis (waving to cousin Julie and internet buddy Richard in the process) and then drove across the endless prairies of southern Illinois and Indiana. I finally found a place to use the restroom, where the bathroom doors were only chest high. 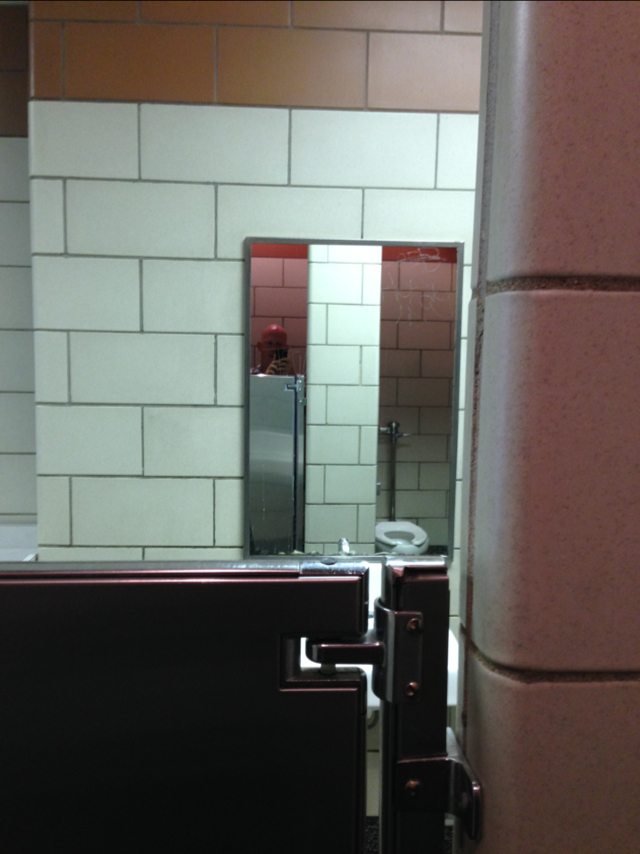 People could glance in while one was doing their business. I would just wave back because I didn’t know the proper etiquette of how to respond when you’re sitting on the toilet. Do I stand? Do I shake something? Wipe something? Do I make a territorial “ahem” noise? So many choices.

When all was said and done we were situated in Louisville, Kentucky, where we are just getting back from dinner at an Irish pub that had a darlin’ server named Michelle who was kind enough to remind me what “Irish Baked Beans” were. I had them for breakfast on toast when we were in Ireland a few years ago. She wasn’t there but she said that would be proper.

If the blog entry seems slightly rambly, it’s because I supplemented lots of Airborne chewable tablets and Halls Vitamin C drops with a Guinness. Or two. But not three. 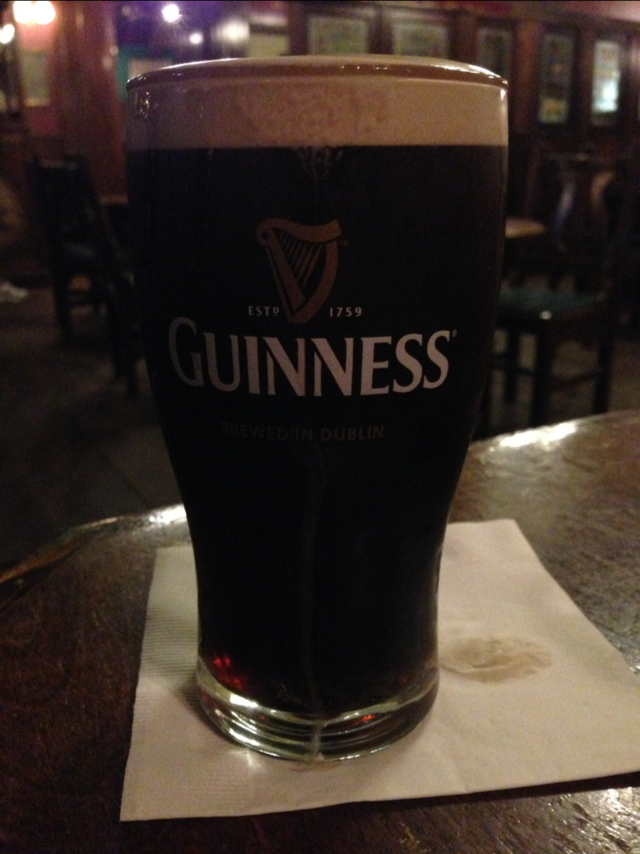 Because three would have just been too much.

I’m going to sleep in in the morning.