There have been funny tweets floating around in my head all morning. Well, at least I found the tweets funny:

“I thought the Oompa Loompas were shorter.”

“I liked it better when the Oompa Loompas helped at the candy factory.”

“It was scarier when the Oompa Loompas showed that movie of the chicken during the boat ride.”

The Oompa Loompa I am referring to is, of course, Donald Trump. 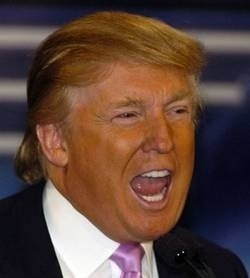 Someone should tell Donald that as an autumn, he shouldn’t wear a winter color such as magenta on his lips. I am fully frightened that I even know what that means but not as frightened as I am by the image of a grown man looking like he should have Sunkist splayed across his forehead. I suspect a secret alliance with Anita Bryant.

Donald Trump has been crowing about some big October surprise that he was going spring onto the country at 12:00 ET today. This surprise was going to absolutely turn the direction of the election on its ear and today would mark the beginning of a new chapter of this election cycle that has already, quite frankly, dragged on way too long.

Internet reports are a little varied, but it is now after 12:00 ET and apparently Donald Trump is going to donate $5M to a charity of President Obama’s choice if the president shows his college papers. Loosely translated, it means, “you’re black and I can’t still get over it”, but that could just be my personal spin on the situation.

There was a rumor that Donald was going to reveal that President and Mrs. Obama had once considered divorce. Big friggin’ woo. I’m sure most couples have considered divorce once during a time of yelling and the like. Personally, I never have. Murder? Possibly. Divorce? Not an option. But anyways, big deal, they’re married today and quite frankly it’s not anyone’s damn business what goes on with their personal relationship.

I think someone needs to go back to rowing the boat down the scary river after laying off the magenta on the lips.

The truth of the matter is that there are two factors that can be squarely blamed for the absurdity of American politics today. First of all, reality television has trained the sheep that everything is now a mindless competition. Who can stuff the dead carcass fastest? Who can make the prettiest cupcake? Who can play ukelele through unfortunate gaseous incidents after a visit to Taco Bell? I’m surprised that the first Presidential debate didn’t involve eating bugs, jumping over an oak tree stump that’s floating down a fake river and then being dropped through a hole in the floor if the candidate’s response went over their time allotment. Why wasn’t Candy Crowley spinning a wheel of bonus rounds? The American populace has been trained to enjoy watching their brothers and sisters suffer. That’s what the sheep want. Screw Little Bo Peep. It’s not “who said the most intelligent things”, it’s “who beat the other one in the most demonstrative way possible.” I’d bet you that the debate viewing numbers would have skyrocketed if the sheep could have watched Obama get sprayed in the face with Rust-Oleum if he stumbled on too many words in a row or if there was a risk of fire around Romney whenever he smiled/grimaced in a creepy way. There’d even be prayer circles hoping for this sort of thing because it could be justified by Leviticus 76:5 part 3 paragraph B or whatever.

The second factor that contributes to this mess lies squarely with the internet. Fueled by reality shows and their ilk, people now think that because they can share their thoughts with the world via the tubes that carry information from one city to another, they’re relevant. Please. Most people, including me, are nothing. They just think they’re something because in school they received a trophy for remembering to breathe while chasing a ball in the wrong direction on a football field. What I write here is designed to do nothing but entertain myself. I rarely take myself seriously. But the fact of the matter is, I could write some pretty outlandish crap here, post a few links, throw up a few photos and then make myself look serious in a headshot and folks would take my writings as gospel. Throw up some ads, write a few sensationalist headlines and voila, rich man making money off the sheep. These are the same people that enjoy watching that Honey Boo Boo thing, give a damn about Snooki and get off watching Kirstie Alley swing herself around on a stage like she’s trying to close her own barn door. The internet has provided an unbridled vehicle of drek and self-importance and Donald Trump (the rich Oompa Loompa) is taking square advantage of it. People will lap it up. Cable news channels will repeat it over and over and over and then it will become a Big Thing™ when in fact it’s a Nothing™.

I’m hoping that nothing will come of this latest revelation from the one that clearly has way too much time on his hands. Let’s hope that my faith in the sheep will be restored in some small way.

In the meantime, stay away from the magenta.