Earl and I just stopped at the filling station on the way home. As I sat there watching the gas pump count up at an alarmingly fast pace, I noticed the woman using the pump opposite of mine looking at me. I smiled at her. She smiled back and said hello. We then had a small conversation about the weather and the leaves and just some good little thoughts. We didn’t know each other. We had never met, but a smile, followed by a smile back, prompted a conversation, and that doesn’t happen nearly enough in today’s society.

As we got home and I took a look at my Google+ stream, the very first entry of the night was about smiling and being happy, simply because you can. I needed to read this today. I needed to have that conversation with the woman at the Hess station. I have been way too stressed out again and it feels good to just smile.

Smile at someone today. They’ll smile back. It’s contagious that way.

Here’s the Google+ entry I enjoyed. It’s a little long, but worth the read.

Life is full of positive experiences. Notice them. Notice the sun warming your skin, the small child learning to walk, and the smiling faces around you. Smell the rain, and feel the wind. Live your life to the fullest potential by reveling in the beauty of these experiences, and letting them inspire you to be the most positive version of YOU.

Living a positive life is all about creating positive habits to help you focus on what truly matters. This is the secret of super positive people. Here are nine simple ideas to help you follow in their footsteps.

1.Wake up every morning with the idea that something wonderful is possible today. – Smiling is a healing energy. Always find a reason to smile. It may not add years to your life but will surely add life to your years. A consistent positive attitude is the cheapest ‘fountain of youth.’ You’ve got to dance like there’s nobody watching, love like you’ll never be hurt, sing like there’s nobody listening, and live like it’s heaven on Earth. Read The How of Happiness.

2.Celebrate your existence. – Your mind is the window through which you see the world. The way to make this the happiest day ever is to think, feel, walk, talk, give, and serve like you are the most fortunate person in the whole world. Open minded, open hearted, and open handed. Nothing more is needed. All is well… and so it is.

3.Appreciate life’s perfect moments. – Your life isn’t perfect, but it does have perfect moments. Don’t let the little things get you down. You’ve got plenty of reasons to look up at the sky and say, “Thank you, I will do my best to make this a great day.” So slow down and pause for a moment to stand in awe of the fact that you are alive, and that you have the ability to rediscover life as the miracle it has always been.

4.Embrace life’s challenges. – Uncharted territory in your life is not good or bad, it just is. Yes, it may rattle your foundation, and you may be tempted to pullback, say you can’t do it, or bail completely. But these are exactly the conditions that set you up for massive amounts of personal growth. Each experience through which you pass operates ultimately for your own good. This is the correct attitude to adopt, and you must be able to see it in this light. Read Change Your Thoughts, Change Your Life.

5.Become addicted to constant and never-ending self improvement. – It doesn’t have to be January 1st to give yourself a chance to make the most out of your life. Every day is a new day to learn, grow, develop your strengths, heal yourself from past regrets, and move forward. Every day gives you a chance to reinvent yourself, to fine-tune who you are, and build on the lessons you have learned. It is never too late to change things that are not working in your life and switch gears. Using today wisely will always help you create a more positive tomorrow.

6.Live and breathe the truth. – It’s the most positive, stress-free way to live, because the truth always reveals itself eventually anyway. So don’t aim to be impressive, aim to be true. Those who are true are truly impressive. Being true means having integrity; and integrity is doing the right thing even when you know nobody is watching.

7.Fill your own bucket. – Choose to be happy for no reason at all. If you are happy for a reason, you could be in trouble, because that reason can get taken away from you. So smile right now because you can right now, and make it a point to fill your own bucket of happiness so high that the rest of the world can’t poke enough holes to drain it dry.

8.Help the people around you smile. – Today, give someone one of your smiles. It might be the only sunshine they see all day. Sometimes just a single genuine smile or compliment can lift a person’s spirits to new heights. At the right time, a kind word from a stranger, or unexpected encouragement from a friend, can make all the difference in the world. Kindness is free, but it’s priceless. And as you know, what goes around comes around. Read A New Earth.

9.Spend time with positive people. – Life’s way too awesome to waste time with people who don’t treat you right. So surround yourself with people who make you happy and make you smile. People who help you up when you’re down. People who would never take advantage of you. People who genuinely care. They are the ones worth keeping in your life. Everyone else is just passing through.

So today I found myself with the afternoon off from work with one instruction, “Relax.” Since my bubble isn’t quite in the center, I decided that this could be taken many ways. I considered relaxing in the manner in which is implied by Frankie Goes To Hollywood, but I’ve been there, done that way too many times in the past 30 years or so, so I thought to myself, “how can I forget my cares in the world today and just enjoy myself?” Since The Art of Shaving is too far away and there wasn’t any room at the spa, I went with my third option, a bike ride.

Three hours and 19 minutes later, I was back home, after completing a ride of nearly 42 miles. It felt like a 30 minute ride, most of the time.

I usually ride in an east-west direction, usually favoring the west because I prefer things in that direction in The Empire State. East-west usually avoids the bigger hills in the area as in these parts one can follow along the Mohawk River and the Barge Canal. I decided to be a complete mad cap and headed in a northeast direction. There are some roads over yonder that I had never ridden on before. These roads are narrow and sparsely dotted with dairy farms for the most part. After passing through the northern limits of the city and in the adjacent county, I found myself on a road called the Shortlots Road. I took a photo of a very old cemetery that had no way of getting to it, as it was surrounded by a cornfield. 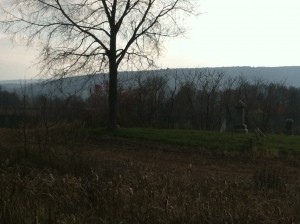 All of the farms I passed on the Shortlots Road were fairly busy with activity. I spotted at least one farm implement in motion with a friendly driver at each farm. The story repeated itself on the adjacent, but narrower Dutchtown Road.

The climb up to these roads was a bit of a challenge but since it was fairly early in the ride, I trotted up with hardly any difficulty. The headwind kept things interesting, but the sun shone brightly and I was feeling content. After making my way down the hill through a little hamlet I didn’t even know existed (Millers Grove?), I followed along the Mohawk River and then made my way into the valley village of Frankfort.

Here’s a shot of Canal Street in Frankfort. I’m thinking the grassy area must be the original Erie Canal. 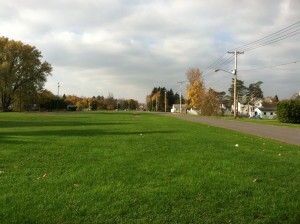 After eating a little snack because I was starting to feel a little bonky, I decided to try my hand at the Frankfort Gorge. Now for those of you not familiar with the area, there are several gorges that run roughly north-south, with the northern end being the lower end. Since I was already at the north end of the Frankfort Gorge, I knew that it would be a climb to get to the southern end. Feeling good, I decided I was looking forward to the challenge. The little NYSDOT marker on Route 171 indicated that it was five miles from where I was to the end of the route, which was the southern end of the gorge.

I was too out of breath to stop to take any photos along the Frankfort Gorge. I did notice that several people had the same idea of riding bikes in the gorge today. I encountered about a dozen cyclists winding their way through the gorge. The only difference was they were heading downhill and I was heading uphill.

When I got to the marker that indicated the southern end of the gorge, I stopped for another snack. I was pooped. 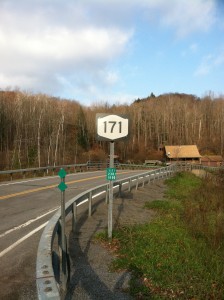 So after riding through the gorge, my choice was to either keep heading up the hill or just ride the gorge back down to Frankfort at a pretty good clip. Feeling ambitious after the energy bar, I decided to keep riding up. I ended up riding to the top of the hill where I found Frankfort-Highland Airport, an airport that my father and I had flown into many, many years ago in the Piper J-5A. 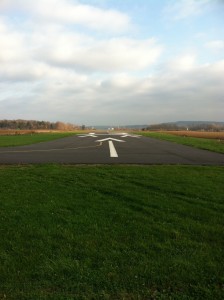 By then I decided I should probably start the ride home, so I rode along the Higby Road, which is a road I never thought I would ride on because it’s way up on top of a hill. It turned out to be a very busy road so I decided to get off of it as soon as possible and found myself descending back into the City of Utica along Albany Street, which has a VERY steep hill. I think I burned whatever was left of my brakes on the way down. 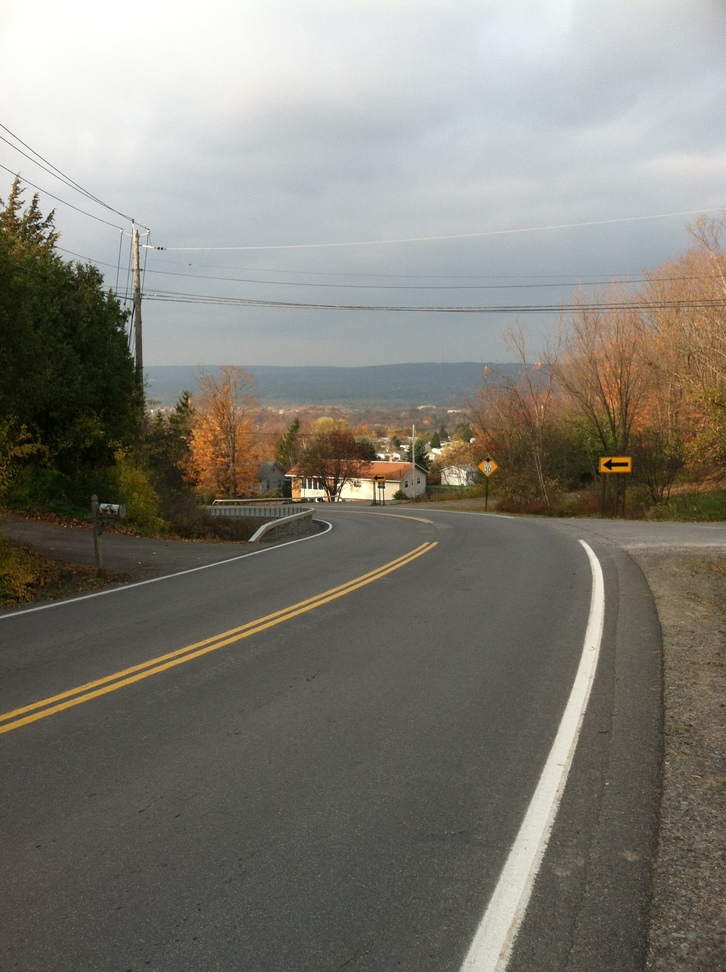 From there it was just a matter of riding through the city during Friday rush hour, where I shortly found myself home after 3 1/3 hours.

And I feel totally relaxed. A very good way to destress.