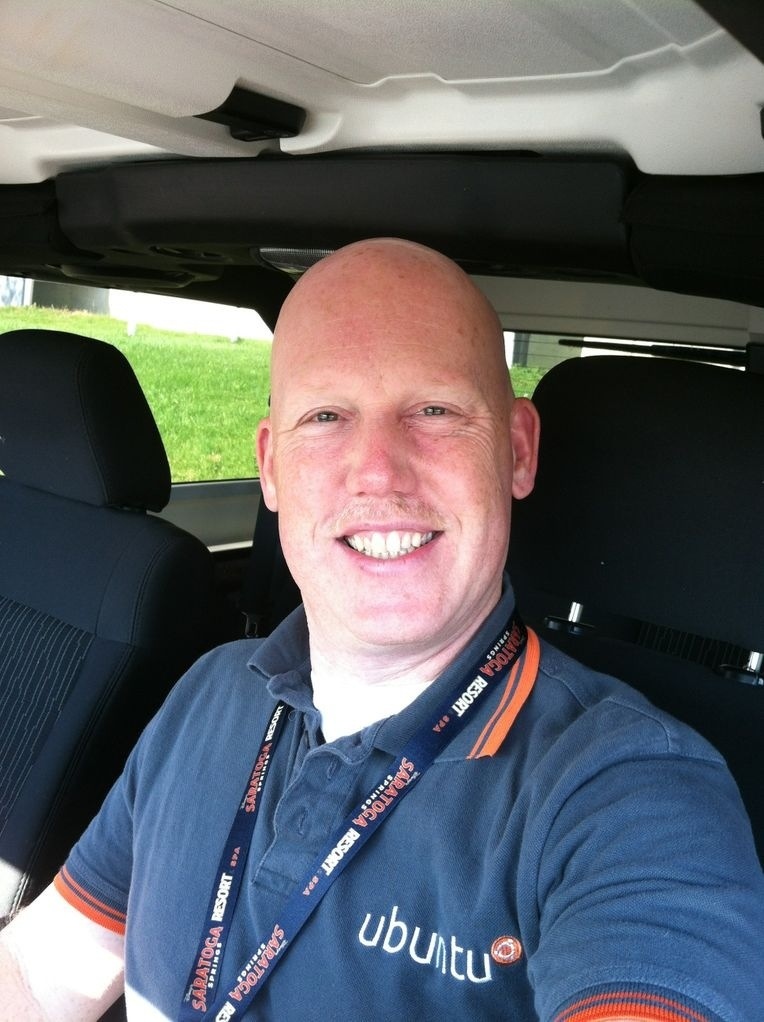 So today I’m sitting in the Jeep and enjoying the sun for my lunch hour. Yesterday I treated myself to an unsweetened iced tea from the Dunkin’ Donuts near home but today I have opted to not do such a thing. Bottled water is the beverage of necessity this lunch hour.

You can see in the picture above that I’m smiling. Observant people will also notice that I am wearing my Ubuntu shirt at work today. I love the feel of this shirt and it fits me well. I opted to wear my Ubuntu shirt today because at any moment, the latest version of Ubuntu, 12.10 or “Quantal Quetzal” will be released to the masses. For those unfamiliar with Ubuntu, it is a Linux distro, or a version of Linux. It’s actually one of the easiest distros to install and it gives the user all sorts of functionality at no cost. Web browsing, email, office applications, chat… all of it is free of cost. Heck, even the operating system can be downloaded at no-charge.

I have been wanting to switch back to Linux full-time for a while now. Some will roll their eyes and say “I thought you loved Apple!”, but over the past year or so, the things that are suppose to “just work” have required a lot more tinkering and futzing than something that “just works” should and I can’t really justify the extra cost of getting something that “just works” when it doesn’t. I’m tired of spending money on new version of software and the latest and greatest app. The thing that bothered me the most was that a monitor that was purchased in early 2012 was not compatible with a MacBook Pro that was purchased in 2010, even though the connectors look the same. The monitor plugs in, but there’s something in the magic tube there that doesn’t let the monitor work with that incarnation of MacBook Pro. That’s when I said, “enough is enough”.

I’m using quote marks a lot in this blog entry.

So I have opted to go back to Linux full-time and become a Linux crusader again. This makes me happy. And that is one of the reasons as to why I’m smiling today.