Earl was watching “Chopped” this evening when he called me into the Great Room. He wanted me to see something on the show. 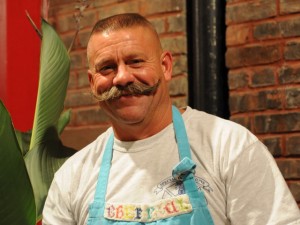 This is Paul. He is a New York City firefighter who is also a chef. I heard these details but I didn’t really pay close attention. I was busy noticing his mustache.

I’m really hoping that everyone downstate and along the east coast are safe today. My inlaws got banged around quite a bit by Hurricane Sandy, but from what we’re seeing on Facebook, all seem safe.

We didn’t get much of a storm up in these parts. Schools closed, curfews were declared in a few insignificant villages, but for the most part we had a few big wind gusts and a little bit of rain. The yard didn’t even flood this time around. The highest wind gust recorded on the weather station has been 27 MPH. As I type, the wind is still around 10 MPH.

Earl and I decided to go to the gym per our usually Monday night routine last night. The roads had few people on them. Restaurants and other businesses had closed. Around two dozen people were in the gym as we trucked through our workouts. I was happy to see that others were maintaining some common sense and not afraid based on the hype. I think some folks forget that we are 200-250 miles from the City of New York. It’s like when we travel, we have to tell people that we are from Upstate New York because otherwise people ask how things are in Central Park or at the Statue of Liberty. I’m proud of being from Upstate. I wish more Upstaters would remember that this is Upstate. They confuse the hype and panic that grips New York and Long Island with what is going on in this area. I blame the internet.

While we were watching the local news broadcasts during our workout last night, I couldn’t help but notice a slight look of disappointment on the faces of the newsbroadcasters. Reality wasn’t living up to the hype and the bleak picture they had painted. Some say “better safe than sorry”. How many times did Chicken Little yell before people started ignoring him?