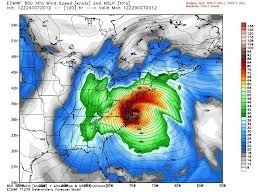 So the news and the weather folks and all that sensationalize these things are starting to talk about the possibility of a Perfect Storm that could hit the East Coast of the U.S. in the beginning of next week. Guesstimates right now indicate that the peak of this Perfect Storm would be Tuesday afternoon. The Perfect Storm scenario is the combination of Hurricane Sandy hitting the coast somewhere between Delaware and Maine, a blast of cold air coming down from the Arctic and a front coming in from the west. There is the potential for a lot of wind, rain and/or snow.

This potential has already started whipping some people up. There’s chatter at work about it, money people are saying it’s going to cause $1B in damages and at any moment I expect to see the couple that buys the donuts come careening into the Dunkin’ Donuts parking lot in their wood paneled Country Squire (with shutters!) at any moment. I know that tonight I plan on doing three laps around the lawn yelling “Help Me! Help Me!” whilst flailing my arms in the air.

Hysteria is the name of the game and if you’re not being hysterical about the weather then you’re not following the script.

There’s a part of me that thinks that the Mayan Prophecy of 2012 has people a little more on edge than usual, but there’s a more realistic side of me that realizes that people are just getting more hysterical by the minute. I, myself, can be hysterical at a moment’s notice, but that’s only because it adds to the levity of the situation. These folks that run around gathering donuts and buying milk and crying a good 96-150 hours before the possibility of a storm are just plain nuts. You can’t change the weather. You do what you can do and just get through it.

Perhaps a few laps around the house flailing my arms and yelling “Help Me! Help Me!” in a puny voice will convince Mother Nature that I have a sense of humor. If not, we’ll add an extra gallon of milk to the fridge, make sure there’s gas in the snowblower and stock up on a few canned goods to hide in the secret room in the basement.

It’ll give me an excuse to go off my healthy eating habits and eat a Slim Jim by candlelight whilst listening to the wind.

I love this commercial.