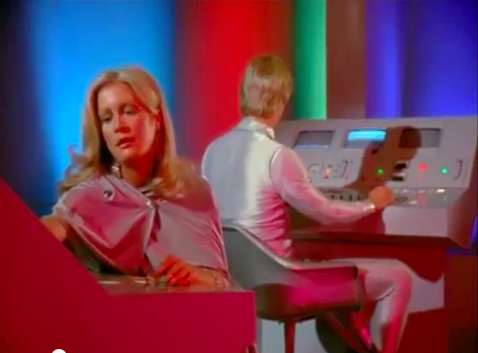 So there’s a third season episode of “The New Adventures of Wonder Woman” called “Time Bomb”. In this episode, guest stars Ted Shackelford and Joan Van Ark play time traveling scientists from 2155; Joan wants to cash in on the capitalistic opportunities of late 1970s America and Ted is the inventor of time travel and needs to stop her. Of course, Lynda Carter’s Wonder Woman does most of the stopping and there’s a bit of an attraction between Wonder Woman and Ted’s character. It always happens.

Aside from the fact that computers are apparently going to be very noisy in 2155 and decorating schemes are obviously going to go all to hell (see photo above), I bring up this episode because there’s an interesting bit of dialog that I have always kind of agreed with. Joan’s character is relaying how technological advances are slowed down because “The Council” (whatever happened to a Presidential figure in the future?) has deemed that no technology would be introduced to society if it was determined that it would have a significant impact to social norms. Once the cultural and societal ramifications were studied and determined, then new technology would be released to the masses.

I think that’s a groovy thing. I wish Joan and Ted were around when cell phones were being invented.

I just stood in line at the local Subway in an effort to order my lunch. In front of me was a young lady. I know that kind of wording makes me sound old, but she had to be only 16 or 17 years old. She was dressed seductively with shorts similar in cut to Wonder Woman’s 1970 costume shorts (less stars = more ass). Up to her ear was a smartphone. It looked like it was a Blackberry, appeared to be well worn and was decked right out in all sorts of bedazzlement.

The folks at the area Subways have put up signs that say “Please don’t talk on the cell phone while you’re ordering.” It’s politely worded. The font is friendly. There is no suggestion of reprimand, just a reminder of what folks should find to be standard manners.

Apparently the young lady can not read and does not comprehend standard manners.

As she giggled and carried on on her bedazzled Blackberry, she barked out things like “a foot long turkey!”. When the Subway assembly man asked her as to the type of cheese she would like, she clicked her tongue on the phone, said “hold on” and gave a stare at said Assembly Man before saying “American”. Luckily, she was able to indicate that she wanted her sub toasted before resuming her important giggling on the phone.

When it came to vegetable assembly, she continued barking out random items from a garden while talking on the phone before bringing the whole process to a halt and declaring, “oh! I want avocado!” Now if she had been paying attention to the matters at hand instead of talking to the remote, tinny, giggling sounds coming from her bedazzlement of wonder, this would not have messed up the assembly line, where subs were then rearranged, backtracked and reassembled.

All because she couldn’t put her phone down.

While I was observing all this merriment, I felt my phone vibrate it’s “text message!” pattern in my pocket. I did not bringing everything to a screeching halt to read said message, I waited until I had paid my money, assembled my large, unsweetened iced tea and sat down in the Jeep before proceeding.

Little Miss Short Shorts was still talking on her phone as she tried to carry her sub and drink on a tray. She almost ran down a woman in a walker but by god she was able to continue on her conversation.

Joan and Ted need to travel here from 2155, pronto, and show the world how much better it can be if we at least consider the societal impacts of technology before implementing it. Until that time, I fear that it’s only going to get worse.

I think I had a spiritual moment whilst standing on the Golden Gate Bridge this past week. It was a glowing happiness that washed over me as I stood there, enjoying the sun and the breezes and the water below. Perhaps it was relatives that have passed on stopping by to enjoy the view with me. Maybe it was the gentle smile from the clergy-like attired man that was there to speak with those that thought about having their last spiritual moment on the bridge. Whatever it was, I felt calm, at peace, recharged and ready to take on the future head-on after a few moments of standing there.

When I returned to the observation area, the man that knows me better than any other person on this world sensed that “something” had happened on the bridge for me. I couldn’t put it in words for him so I didn’t try. I know I felt more relaxed than I have in a couple of years. The feeling carries on.

This weekend a friend asked if I am a spiritual person. The emphasis of the question was on the word ‘spiritual’ versus ‘religious’. I’m definitely not a religious person; I think the vast majority of organized religions have taken the a beautiful intent and perverted into a diatribe of hate, a conversation of a fear and an intent of pure profit. But spirituality is something completely different for me. Spirituality is found when the heart connects with everything that surrounds it. I seek beauty everywhere I look. I fully believe that this life, right now, is just one chapter of a multi-faceted journey and I fully believe that we have kindred spirits that we have known before, we know now and we will know again. I have met people where there was just a resounding ‘click’. When I meet someone for the first time and I feel that ‘click’, I attribute it to some sort of connection and start talking with them like I’ve known them before. I figure we had a conversation in a previous life or something, so we might as well just continue on together. I know, it sounds very Shirley MacLaine. I’m okay with that (though I wasn’t completely okay with her portrayal of Endora).

I know a lot of gay men that are atheists. I know many that have found a path similar to mine; finding spirituality via the Universe instead of relying on the writings of man. Each of us have our own path and I’m fine with that. I’m not going to try to change your mind and I thank you for not trying to change mine. We have our beliefs and I don’t think that it all comes down a binary answer.

I believe that we can do wondrous things for the world if we just open our hearts and minds. Standing on the Golden Gate Bridge opened up my heart and mind a little more. My goal is to maintain that openness and do what I can to make the world a better place. So yes, I am a very spiritual person and I am happy that I have found that again.

So Earl, Jamie and I are sitting on UA 54 on our way home from San Francisco. I just waved out the window at our friends Tim and Gordon in Cheyenne, Wyo. It helps to be a road/map geek. I can sometimes spot a city from the air. The map on the monitor in front of me helps a bit.

According to the rotating display in front of me, the air temperature is currently -57ºF. For some reason this doesn’t seem right to me. That’s damn cold. But, I’ve never been outside of an aircraft at this altitude so perhaps it is that chilly.

I have been watching the passengers mill about the cabin for the distancia recorrida of 1585 Km. There is one particular woman who became cranky when the flight attendant wanted to get around her as she just stood in the aisle. The cranky woman wasn’t going anywhere in particular, she was just standing there. Perhaps she was looking for an ATM or a bus or something. She didn’t head to the wash room and she didn’t look to concerned about being seated, she just kind of hung out and looked crabby. I took a picture of the back of her head and posted it on Instagram (actually, it will post to Instagram when we have wifi again) because I think it’s rude to post a person’s face unless they’re hot and she’s not hot.

For a while I watched another United plane fly alongside us, about four miles off our wing and probably 2000 feet lower in altitude. It then veered under us and headed off somewhere else.

We are flying on a Boeing 757. While our flight to San Francisco had DirecTV available, this plane does not. We have touch screens that have movies on demand. I’m declining the offer, opting to listen to music and answer emails and write blog entries instead. Jamie is napping and Earl is watching a movie. I don’t know what he is watching. Since we have our own “family row” on this trip, I’ve spread out a little bit and am enjoying typing on the keyboard I brought along for the trip. It’s much easier than trying to type on an iPad keyboard.

Cranky ugly sat down with a haughty huff. It was hard to discern the haughtiness through the puckered facial expressions, but when you’re a people watcher, you get better at these things. I hope she’s more pleasant at home. It would suck to go through life in a constant cranky state.