I routinely hit Earl up with random questions, derived from the thoughts that are floating around my head at a given moment. For example, one of my friends on Facebook just posted a picture of a Red Velvet Cake that had been made from scratch.

The reason that Red Velvet Cake concerns me is I can’t figure out how the cake becomes red. This is one of the reasons that I don’t naturally select Red Velvet Cake as a dessert delectable. I pondered this for a moment, randomly deducing that beet juice might be involved, when I decided to bark out.

Earl calmly looked up at me and gave me the mellow “What?” gaze.

“How do they make the Red Velvet Cake red?” My voice had ramped back a notch in distress.

“Do you really want to know?”

Quite frankly, I was now terrified because I thought that maybe blood would be involved and that just didn’t seem, well, I don’t know, healthy. Or American. Maybe it would be more American than healthy if there was blood involved but I didn’t want to get wrapped up in a political debate.

“They burn the chocolate.”

He went back to watching a political campaign ad, leaving me to ponder why anyone would want to burn a perfectly good piece of chocolate just to make it red.

So the other day Earl mentioned that one of his favorite photos of me is from my birthday back in 1997. It’s hard to believe that it has been 15 years since I was 29. Time sure flies by fast. 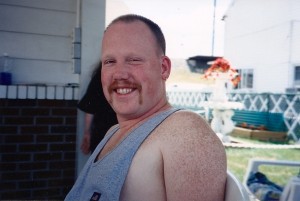 Today I turn 44. Life is good, I’m quite content and I’m very happy. Last night, under a slight(?) influence of alcohol, I told the world via Facebook how much I love my life, my husband, my work and the whatnot. I was accused of being sappy. You should see how I handle my beer in person. It’s a hoot.

Yesterday I received an official itinerary in my email.

Events have been planned for the weekend, including going away somewhere. I don’t know where we are going. I just know that I need to pack a bag, the travel time can be measured in multiple hours and that there is an entry on the official itinerary labeled “Exploration”. Sounds like fun!

Without sounding sappy, as I’m not influenced by alcohol since I haven’t drank my breakfast yet, folks are absolutely right when they say “it gets better.” Life does get better, and turning 44 years old is something that I’m proud of. 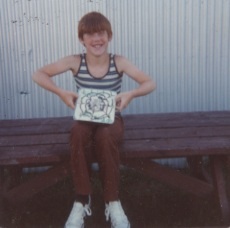