So I am sitting in the Jeep at lunch time doing what I usually do during the week when I am at work at this time but in a different place. I am currently situated in the fine city of Rome (not Italy) enjoying the shade of some fairly tall maple trees. The sun is very warm today. The top is off the Jeep and I am enjoying a short ride around the area. Earl is playing in a pretty major poker tournament at Turning Stone Casino today. Not hearing from him is a good thing. Let’s hope it stays that way into the evening.

This parking lot is next to an old grocery store that was called Great American. Back in it’s day it wasn’t a large grocery store by any means, but it had enough traffic to warrant five or six checkout lanes. I shopped here when I lived closer to Rome back in the early 90s. In the late 90s, after the arrival of the Wal*mart Supercenter, it was closed down. I thought it would end up being abandoned but the owner of the local drive in movie theatre bought it and converted it into an eight cinema theatre. That’s right, a former grocery store that was maybe 40-50,000 square feet is now an eight theatre cinema complex. Some of the theatre only have 50-60 seats in them. One of them has the seating off center from the screen itself. The prices for admission and concessions are considerably lower than the chain theatre closest to our home but we still haven’t been here in a while. Perhaps we should patronize the local business. 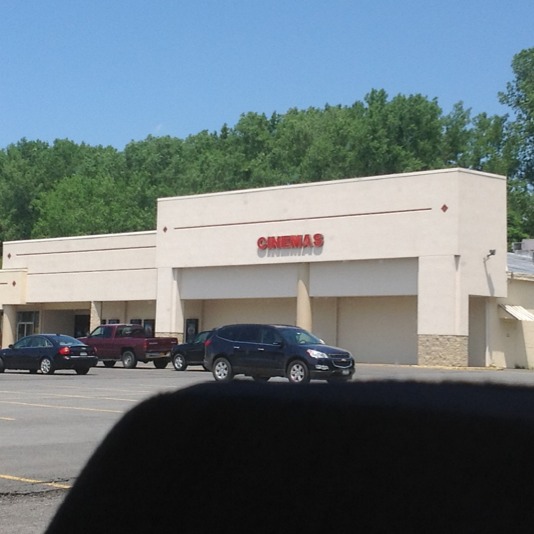 The drive in theatre was ripped down late last year to be replaced by a car dealer. There was an outrage from the community about this. The car dealer decided he would build a new drive in. Signs proclaim that the new drive in is opening in the spring of 2012. I still can’t find the screen and I don’t see a list of the movies currently playing. Perhaps you need to bring an iPad or something if you want to watch a movie. I find this disappointing. Considering the car dealer left two abandoned dealerships on the other side of town to build this one (and ruined a local landmark in the process), I kind of hope that his sales suck.

My parking location allows me to view a Pizza Hut that has been there since the dawn of American civilization. It’s the traditional Pizza Hut in that it has a large red roof. You can still see the “label scar” of where the old “Pizza Hut” logo was. Slapped over it in a small corner is the new Pizza Hut logo. This is suppose to make us feel new and modern. The last time Earl and I were in that Pizza Hut there was a waitress named Laurie that had been working there since 1982. I always thought that Laurie was an odd name for her. She looked like she should be a Marilyn. Even though we go in there maybe once every five years she still remembers our drink orders. I think we might be due for a visit. 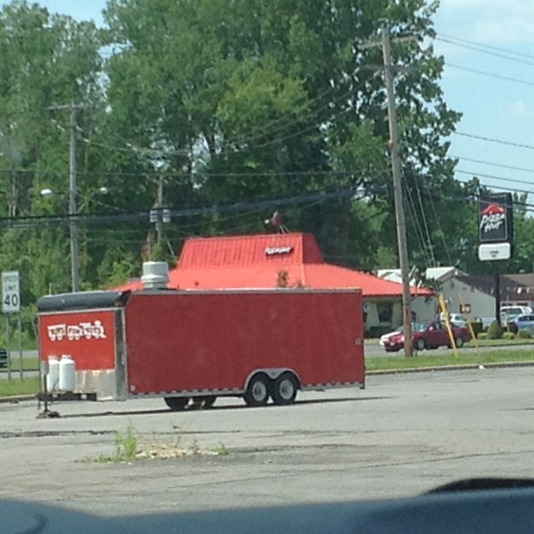 If I look over to the right I can see McDonalds that has been there since at least the mid 1970s. I always remember this particular McDonalds because Dad took the family there after visiting a local airstrip called Beck’s Grove. We had to pick him up at Beck’s Grove after flying from his home airport to this little airport solo while he was still learning how to fly. Our treat for the weekend was to go to this McDonalds. They had cash registers made by GTE that were called GTE Comp-Acct and I was fascinated by the fact that the register could intelligently group the common items in the order together in a section of the receipt called RECAP. The register was very loud when it printed the all capital letters on the receipt. I remember a lot of useless crap.

I don’t know that I’m going to drive very far today. Sitting in the shade is kind of relaxing to me. I’d sit on the back patio at home but there’s heavy machinery being operated by good looking men in our lawn. They are digging out the creek that runs behind the house so that the lawn no longer floods every time there’s a hint of rain. Earl and I are going to install a bridge once everything gets settled.

Oh, I went to the Dunkin’ Donuts near the former Griffiss Air Force Base. The large, unsweetened iced tea with lemon was $1.08 with tax. I guess they didn’t hear that they’re suppose to be part of the “Great Iced Tea Robbery”.