Back in February ’02, Earl and I had the delightful experience of seeing Bea Arthur do her one-woman show on Broadway. It was a last minute decision to see Ms. Arthur, as we had picked up half priced tickets at the TKTS stand at Times Square that day. The seats were wonderful and we had the opportunity to see her up close at the backstage door after the show.

At the beginning of the show, Bea starts by giving a recipe to one of her favorite dishes. The culinary delight escapes me right now, but one of the things that she talks about throughout her show is that instead of going for something sweet for dessert, she prefers something else. She prefers to have a selection of cheeses with a dessert wine.

Tonight Earl and I went to Disney’s Boardwalk for dinner at the “Flying Fish Café”, on the recommendation of a bear in Buffalo we call Spanglemaker. (That’s his online name. I don’t think his parents named him that though if they did it would be quite the conversation piece).

There were the usual assortment of tourists at the Flying Fish Café, where they do their best to give you an upscale dining experience. Earl and I had a bottle of wine; he had crab cakes and I had “two onion soup” for an appetizer, he had Tilefish and I had Red Snapper for the main course. We agreed that both of our meals were absolutely delightful and we finished off the bottle of wine before we were to the end of entreés. Thank the universe for tap water on the side.

Since this was a somewhat fancy dining experience, it stayed true to the old dining rule, “The more you pay, the smaller the entreé.” I like rhyming my old dining rules.*

The server (he had a fancy name that escapes me right now, but I recall that he was from Bethlehem, Pa.) then brought us the dessert menu, where I noticed that among the wonderful selection of confectionary delights they also had a five cheese platter, complimented by raisins on the vine and a few dollops of other fruit. Intrigued, and remembering Bea, I decided that I would try the cheese platter and compliment it with the recommended Inniskillin 2003 Riesling Icewine from the Niagara Penisula. I’ve never had cheese at the end of the meal before, nor have I ever had a dessert wine. The cheese platter came with toast points and the aforementioned fruit garnishes.

I love having cheese at the end of the meal. I don’t miss the heavy feeling one gets after eating a slice of cheesecake and I don’t miss the sugar buzz from eating some confectionary concoction (though the buzz I’m feeling from the wine is a perfectly acceptable substitute.)

Many remember Bea Arthur for her portrayals as Maude Findley and Dorothy Zbornack, as well as all the other character roles she has played over the years. I shall remember her first and foremost for her recommendation of cheese as dessert.

*-This blog entry was written after several glasses of wine and two rides on Disney Transport buses. I hope that I remained coherent.

Earl and I paid a visit to Disney’s Animal Kingdom today. As I mentioned before, Animal Kingdom is one of my favorite places at WDW and today just solidified that fact.

Can I just say that I love the FastPass system that Disney has on their more popular attractions. It’s so easy. You just insert your park ticket or room key and out pops a little ticket that tells you when to come back to the attraction, usually with a window of an hour. Then there’s little to no wait as you jump into the FastPass lane at the attraction. By doing this, you avoid spending time in longer lines when you can be out exploring other parts off the park.

With this visit was our first experience with Expedition Everest. It was best roller-coaster type ride we’ve been on in a long while.

I also enjoy going over to Conservation Station. Here you can learn about what you can do to keep the Earth “eco-friendly”, plus there’s a petting zoo where I enjoy chatting with the animals.

We also went on the safari ride and enjoyed the “Flights of Wonder” show (featuring various birds doing natural bird-like things, including a parrot that sang “Yankee Doodle Dandy”.) After the 4:00 p.m. parade, Earl and I headed back to our home at Saratoga Springs, where we are now relaxing a bit before heading over to the Boardwalk for dinner at the Flying Fish. 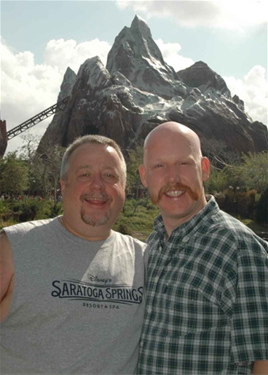