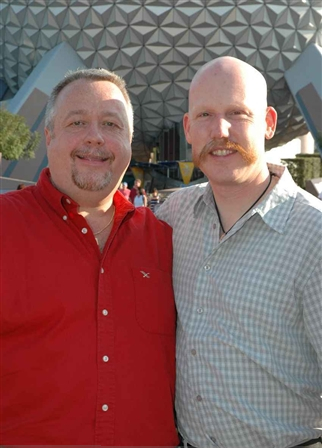 This is our fourth trip together to Walt Disney World. In the past we’ve devoted one day to each of the theme parks. This year we’ve extended our trip by a day and a half, allowing us to approach the activities at a more relaxed pace. So we decided to devote two days to Epcot this time.

For those unfamiliar with Epcot, it is one Disney World theme park divided into two main parts. The front part is geared more toward “innovation” and environmental kind of stuff (called “Future World”), while the back part is the “World Showcase”, eleven different pavilions representing eleven different countries.

A full explanation of Epcot can be found here.

Since I wasn’t really raised as a Disney kid, it isn’t blasphemy for me to say that it’s a toss-up between Epcot or Animal Kingdom as my favorite park here at Disney World. (Adults raised as “Disney kids” will tell you that Magic Kingdom is their favorite and that’s the way it must be because it’s the original.)

I love Epcot. I feel Epcot embodies the dream that Walt Disney had of actually educating families in a non-institutional way. If you pay attention to all that’s going on through the park, there’s a lot to be learned at the various displays, exhibits and rides. From “Ellen’s Energy Adventure” to the boat ride on “The Land” to the GM Test Track, there’s a lot of interesting things going on at Epcot.

I must say that I’m quite proud of my partner as he has used the “Earl Glare” on several occasions to people using their cell phones on a ride or during a presentation. It must be icy cold, because the couple of times that he’s fired off that glare the cell phone conversation has come to an abrupt end. I love it.

After Epcot, Earl and I returned to Saratoga Springs to freshen up and then jumped on a boat to Downtown Disney and Pleasure Island. We decided to have dinner at the Raglan Road Irish Pub, where the food was excellent, the authentic Irish music was lively and the Irish jib dancer was talented and loud.

All in all a great day in the sunshine.