I am currently sitting aboard Delta flight 1967 headed from Atlanta to San Diego. We are less than an hour into our flight and have about four more hours to go. We are flying through some weather and the pilot has left the seat belt sign illuminated. He has also instructed the flight attendants to remain seated as well.

I’m curious as to why passengers are walking/bouncing up and down the aisles. Do passengers know better than the flight crew?

I am currently sitting in row 12 on this B767-300. Though I am sitting in a window seat, there is no window for this row, just a blank wall. This isn’t a horrible thing as I can seat out of the window that is next to the row in front of me. I like looking out and seeing what’s out there. That’s one of the nifty things about flying.

There is a window behind me that is actually right at my shoulder. The person in the seat behind me closed their window shade before takeoff and began banging on my seat for some reason. It’s not as annoying as the time that a child bounced on the attached tray table for most of a flight, but it’s noticeable. Because of my love of flying, I can’t even begin to imagine why someone would close the window shade when they’re in a window seat. But that’s what a lot of folks do these days; they close themselves off from the rest of the world and exist in their own little silo. I think life is too short to exist within walls. You have to find the horizon and reach for it.

As I have been typing this entry the “rough air” (apparently ‘turbulence’ is too scary a word for Delta) has subsided and the “fasten seat belt” sign has been turned off. Everyone popped up like a jack-in-the-box. I am thankful that they didn’t dance a little jig because honestly I’d find that frightening. 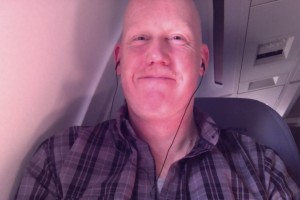