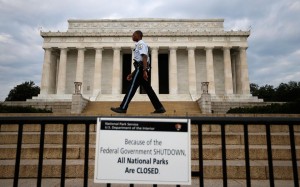 So Earl and I were going to drive to DC today to visit the Smithsonian and perhaps the Washington Monument and the Lincoln Memorial. Actually, we weren’t going to do that but if we were going to do that we would be wasting our time because as of 12:01 a.m., the government has shut down all non-essential services. This is all because Congress has been wasting our time by pretending that they’re going to do something. The truth of the matter is that we all know they’re not going to do anything because they’re incapable of progress. And they wonder why they have an approval rating close to the single digits.

Look, I’m on a happy vibe today so I’m not going to debate the arguments of who is right and who is wrong and who should do what to make whomever happy. I will admit that I am frustrated that the government basically cherry-picked what services would be shutdown and what would stay open. I think that if you’re going to go through all the grandstanding and politicizing and drama of getting to the point of where you’re going to shut down the government, then those making these decisions shouldn’t be paid. If you’re not doing your job, you don’t get a salary. Plain and simple.

I also feel that if they shut down the government then they should have shut down the FAA, the Post Office and other services they have deemed as “essential”. People may strongly object to this, but I think all FAA directed air traffic should have been brought to a ground stop at 12:01 a.m. with the shutdown of the government. There are other ways to get from point A to point B. It’s inconvenient, I know, oh do I know, but if you’re going to use a shutdown as a grandstanding measure, land the planes and turn the equipment off. Not being able to get into National Parks or delaying the arrival of a new passport? It’s inconvenient and will get some press but it doesn’t really demonstrate the incompetency of our current government to the majority of the American people. If there were thousands of airline passengers stranded in our airports or Suzie Citizen couldn’t get her QVC shipment because UPS can’t fly from there to here, all because of our the idiocy of Congress, more American citizens would take notice and I bet they would think twice before just blindly casting a vote at the next election.

I know, I’m being optimistic to think that a lot of Americans vote these days.

I think it’s horrible that the family that just trucked across South Dakota last night can’t see Mount Rushmore today. A beautiful national monument: off limits. What does that say about the country that is constantly touting itself as the “greatest nation on earth”? While this shutdown of non-essential services will have a somewhat detrimental effect in the short term, I don’t think it will budge the apathetic nature of the average American citizen. Stopping the planes? Stopping the mail? Stalling social security checks, Medicaid and Medicare? *That* would have a horrible, awful, terrible effect on our country, but maybe then the American citizens would wake up and see how dysfunctional our government is becoming and start making better choices at the polls. At the very least, maybe our elected leaders wouldn’t be so quick to bicker like children and start threatening ridiculous tactics like this shutdown.

A quick caveat, I am going to be flying all over the place this month. I would definitely be affected by any sort of ground stop on planes in the name of a government shutdown. But I would still support such a thing.