Tonight is “Exhibit A” as to why this is my favorite time of the year. The fairly warm wind, the crispness of the air and the rustle of the leaves all lend to a magic vibe. The moderately clear sky tonight also helps perpetuate that vibe.

What a gorgeous night.

I just took a photo of the moon with my real camera, a Canon EOS Rebel XS. The photo was taken without a tripod. I don’t think it came out too shabby. It’s not what I would consider “Cub Quality” but not bad for a guy that doesn’t know what he’s doing. 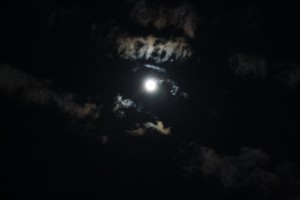 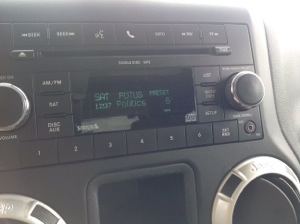 So I’ve been listening to Sirius/XM’s POTUS channel quite a bit again. My Twitter stream is populated with lots of folks with a political interest. I like to think that I’m somewhat in tune with what’s happening our country and I like to think that many would be interested in being as informed as I strive to be.

Please note that I haven’t been blogging about politics lately. To write about it endlessly would lead me to some depressed state, so I’ve been concentrating on happier things like travel and flowers and autumn winds.

To put it mildly, I am really disappointed with the current state of the U.S. Government. While I believe that the majority of the mechanics of our government is sound, I think that we’ve populated our ranks with a bunch of idiotic, crazy, stupid people from the top of the mountain right down to the bottom of the river.

I’m probably going to bullet point this because I’m feeling my blood pressure rise as I formulate this blog entry.

* While I think that everyone is entitled to affordable health care and I agree with much of the Affordable Care Act, I am PISSED that the new healthcare.gov site was designed and coded by a Canadian contractor. I am INSULTED by this.

* Per reports that I heard this morning on unconnected media outlets, the United States spends $1.00 for every 70 cents it takes in in taxes. I don’t know how the budget works in your household, but when Earl and I have acted in a similar behavior we have found ourselves in debt and have ended up working really hard to get out of that debt. The country can not go on spending more than it brings in. We could reign in some of these stupid, idiotic congressional squabbles if the freakin’ budget was balanced.

* Through no fault of their own, thousands of government workers have been off-the-job since the beginning of the month. This is how a government shutdown works. It’s horrible that the government was shutdown in the first place, but to add salt to this gaping wound, the workers will be paid for sitting at home during the shutdown and then will be paid again for doing the work they should have been doing in the first place. Again, this is nothing against the workers that were affected by this, but what the bloody hell? The purpose of the shutdown was what again?

* I really wish that a certain group of individuals would just admit the racism card and get it over with.

* I am really starting to become interested in the way other democratic governments work. People keep telling me that if the congressional body of Australia pulled something like our Congress did, the whole group of them would be declared null and void and there would be an election within three weeks to fill all the seats. I really like the idea of a quick election process. A lot. Hearing people talk about Hillary in 2016 is making me want to scream at anyone or anything. It’s 2013. Presidential elections are over three years away. We shouldn’t even be talking about such a thing until August 2016. Simmer down people.

* Congress needs an overhaul. They keep changing the rules so that they can do whatever the heck they want. Congressional districts are being redefined, rules of voting procedures are being made more convenient and they keep paying themselves for doing nothing. If there was any part of our government that needed a complete reboot, it’s those idiots in Congress. To think that there’s 5% of the American population that thinks they’re doing a good job is insulting and sadly indicative of what’s wrong with our country: the celebration of idiocy and mediocrity.

* I like Australia’s law of “If you don’t vote you have to pay a fine.” I really like that. Get the lazy American population off its ass and into the voting booths.

* Any congressional member that is using words like “historic” and the like to describe today’s steps towards diverting the country from a huge fiscal calamity should be smacked right across the face on live television. I don’t care who does the smacking, but the only reason this is historic is because we’ve never been in such a horrid state of affairs before. Just awful. Any sense of pride is insulting to each and every American citizen.

I saw this link fly by on my Facebook feed. It’s rare that I’ll follow a link off of Facebook but this one caught my attention so I read it.

I don’t know what has happened to the United States of America. I hardly recognize what we have become.

Why I Never, Ever Will Go Back To The United States.