So I went on a little bit of a Twitter rant this morning, specifically about news that Verizon is turning all “metadata” associated with *all* phones calls passing through their network over to the NSA. I will say right here and now that Verizon is doing this under court order and I have no doubt in my mind that the other telecoms in the United States are doing the same thing, but the article was specifically about Verizon. Broadly speaking, this activity falls under the Patriot Act and is taking place so that we have a safer place to live.

I’m sorry, but I don’t feel safe knowing that the government is amassing all of this data from innocent citizens. My rant went a little bit like this:

You get my drift.

I know that my thinking puts me over in that fringe area at times and that my ranting probably gets me labeled a lunatic now and then (put ’em together and whatya got? Lunatic Fringe! woo!), but if there is one thing that I firmly believe it is in privacy and the natural free will of people. I’ll admit that I have control issues but in no way, shape or form, does it seem OK to me for the government to be keeping track of every single phone call made by every single citizen of the United States for a indeterminate amount of time. There are too many insane people with questionable motives in governmental agencies that could tap that database for reasons other than the original intention and furthermore, when these kinds of behaviors occur without question or challenge, they become the norm, and quite frankly, this is a solid step in the direction of an Orwellian 1984.

The U.S. Government screws up all the time. We all know that. Back in 1990 the DMV repeatedly sent me a bill for some service charge that they felt they had failed to collect when I moved my car to its new residence. I ignored the bill repeatedly and they sent me warnings about losing my license, my virginity and the inability to digest corn.

To shut them up, I made a check out to the DMV for ZERO.

I never heard from them again.

Now, let’s see you have your iPhone or Android phone jammed into your back pocket. And you’ve butt dialed someone. Repeatedly. We’ve all been there, screaming into a phone saying “you’re calling me by mistake!” But your ass is feeling feisty and has inadvertently made some random international call and you’ve butt dialed some guy in Iran. Repeatedly.

24 hours later you have a drone hovering over your backyard and you’re toast.

Now, I know that sounds wicked far-fetched, but papers get mixed up, signals get crossed and some do-gooder (god I sound like my grandfather) in Washington decides that you’re a threat to National Security and you are no longer allowed to fly, see the Liberty Bell or digest corn.

You laugh, but with the idiocy in the bureaucracy, it could certainly happen.

As I type this, I’m wondering if I should be concerned about sharing my feelings on line, because it seems that the house is being buzzed by a Lockheed C-5 Galaxy. 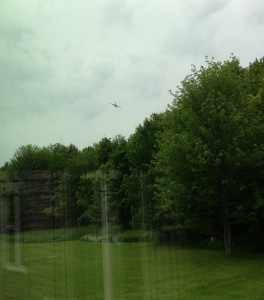