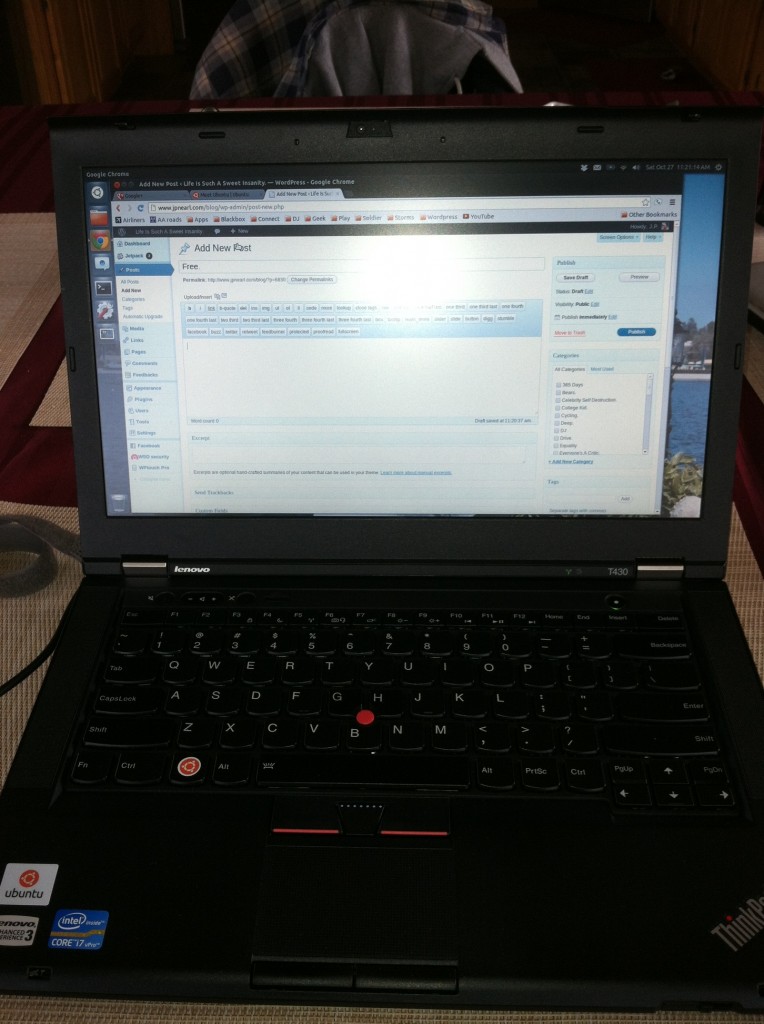 So I recently purchased a new laptop. The latest piece of technology in the house is a Lenovo ThinkPad T430 laptop. For the technically curious, it has an Core i7 vPro processor with 16GB RAM and a 500GB 7200 rpm hard drive.

This baby is fast.

The new laptop arrived on Thursday. I made the recovery discs (since they no longer come with a new computer) and then went ahead and wiped it out, installing Ubuntu 12.10 (Quantal Quetzal) Linux in it’s place. I found it ironic that I chose to do this on the day that Windows 8 was being released to the world. I know a lot of people are excited about Windows 8, but using the new version of Windows for only an hour made me feel like the most ignorant or stupid computer user in the world. Everything was different and I didn’t have a touchscreen, and Windows 8 was clearly made for a touchscreen. Flinging my mouse off the right hand side of the screen to bring up a neutered version of a start menu did not feel intuitive for me. For a person that’s been using Windows in some fashion since 1988, I was completely lost.

Ubuntu Linux is not windows and it has a different user experience from Windows (if you want it to), but it still feels intuitive to me. Things are different, but they make sense. And there’s no need for a touchscreen.

If you want to learn more about Ubuntu Linux, please feel free to check it out here. I’m a bit of a Linux evangelist, so if you are curious and have any questions about using Linux, just drop me a line. I’ll help out where I can. I use Linux both at work and at home.

And now I have some Macs for sale. A couple of them, as a matter of fact. I’ll post the specs online sometime this weekend in case anyone is interested.

I’ve been asked why I would want to move away from the Mac and onto Linux. They’re kind of close cousins in the way that they work under the hood (Macs run a flavor of Unix and Linux is Unix-like) so at that level I feel very comfortable with either. The thing about using a Mac is that Apple is locking users in even more than they used to be into the “Apple walled garden.” For example, one used to be able to subscribe to their MobileMe calendar using a third-party service such as Google Calendar, but this is not possible with the advent of iCloud.

I want my bits and bytes to be open and free. I want to be able to share my information with whatever application I choose to use and with whomever I want to share with, regardless of what operating system they’re using on their computer. Linux gives me that luxury, Mac OS X doesn’t always provide for that.

If you’re looking for a new computer to run Linux, or even Windows on, I highly recommend the Lenovo line of products. I love their hardware. It has a nice, solid feel to it and the ThinkPad keyboards can’t be beat (even the new iteration of ThinkPad keyboard that appears on my new laptop). Highly recommended.