I haven’t talked about American Idol much during these final weeks of the competition, but Earl and I have been watching the performances and the results shows. Wednesday night we sat down and watched the finale, which I found to be quite entertaining. I was originally going to write a blog entry during the event but lost interest about a third of a way into the show. The entry just wasn’t coming together the way I wanted it to. However, here are a couple of thoughts from watching the show:

1. Donna Summer was amazing. I was a little shocked to see her being escorted down the stairs (because it looked like she needed the help), but Earl said that was just Donna’s way of being a diva and making an entrance. Either way, I thought she looked amazing and sounded fantastic. And am I right, or what: “Stamp Your Feet” is going to be a big summer hit.

2. Could Amanda Overmyer look anymore uncomfortable with singing pop songs? I know that’s not her genre, but it’s the gig she signed onto when she auditioned for American Idol. Maybe the angry rocker chick is her shtick.

3. David Archuleta has the voice of an angel and will be soaring up Clay Aiken Boulevard in the career department without an issue.

4. David Cook has a promising career ahead of him and I found his performances genuine and enjoyable. I think America got it right with the voting of the finale. Both have promising careers, Cookie is more prepared for it than Archie is.

5. I think I have a crush on Carly Smithson. Not only did she give her best in all of her performances during the finale, she looked wicked hot in her “Hot Stuff” outfit. I don’t usually notice these things, but I certainly noticed Carly Wednesday night. And, her duet with Michael Johns was one of the highlights of the evening. They both nailed the performance and were thoroughly entertaining. 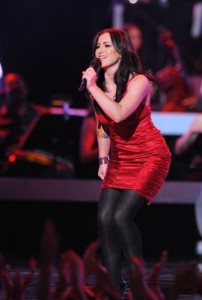 Many have noticed that there are a couple of “locked” entries on my blog. I have received e-mails asking what these entries are and the reason that they can’t see them. So here’s the deal.

While I don’t track statistics all that much, I know that there are many, many readers of my blog and for the most part my blog is PG rated. I might drop a few f-bombs here and there but usually I talk about everyday observations of a myriad of topics in a candid, conversational way. It is something that I enjoy doing and in a way it allows me to process random thoughts that are zinging about my head. However, once in a while I feel the need to write about more controversial topics (read “sex”). Always cognizant of my surroundings (in this case, a general idea of who is reading the blog), I find myself without an outlet for some of my seedier discussions. Hence, the locked blog entries. They allow me to write about things I have seen, thought about or experienced over the years AND have some sort of control as to who is reading the content of these entries. I’m not ashamed of what I write in these blog entries in any way, but I’m not ready to discuss the contents of them at the next family reunion or over the water cooler at work.

If you’re interested in the content of the locked entries, drop me an e-mail and we’ll chat a bit and I’ll get you set up for access.