Earl’s Jeep Wrangler has been part of the family for four years. Every year we take advantage of the nice weather and take the sides and back off and put the top down. It’s a glorious way to bask in the sunshine. Today we decided to take it a step further and take the doors off as well.

We decided to go for a ride but stay rather close to home in the process, so we opted to drive through the various gorges and through the hills nearby. There is a particular road that winds through rural farmland and open fields; a similar road exists where I used to live in the western part of the state and that road is called the “Open Meadows Road”. This is the “Cedarville-Jordanville Road” but I like to think of it as an eastern version of the Open Meadows Road. It’s a beautiful drive, especially when you’re basking in the sun, the temperatures are mild and there’s no doors on the Jeep.

From there we headed into the Ilion Gorge, one of several gorges in the area. I think our gorges are related to the Finger Lakes but the Universe just didn’t put as much water into them. The windy roads and the isolated homes dotting the gorge are nice; I have to admit I like the feeling of solitude.

After our ride we ended up at the Park-Side Drive In in St. Johnsville, one of the many villages along the historic Erie Canal. The food was your standard local restaurant fare and quite good.

It has been an absolutely gorgeous day.

A little video from today’s adventure.

I don’t know why I’ve decided to add “thing” to my blog title entries lately. I don’t even know if the trend will continue. It’s kind of like the title of episodes from “Friends”, they all started with “The One About…”

Anyway, Earl and I headed west on the New York State Thruway today and went exploring in the Rochester area. We have several friends and some family in Rochester but we didn’t see any of them. No, we went to Rochester because they have a really good cinema megaplex called “Tinseltown”. On the big screen was “Indiana Jones and the Kingdom of the Crystal Skull”. The Indiana Jones series is Earl’s favorite cinematic adventure, and I enjoy the movies as well, so it was an adventure to look forward to. The audience was well behaved and the movie was good. I wouldn’t say it was great, but it was good. The geek in me noted a glaring technology-related error near the beginning of the movie. E-mail me if you want the details, as I don’t want to drop any spoilers on my blog.

One of the greatest things about movie theatres these days is that they’re finally getting that attendees are REALLY fed up with the presence of cell phones in the auditoriums. The reminders to turn off your cell phones are relentless and numerous. I’d even say they’ve become obnoxious with the final reminder announcement, leaving it on the screen for nearly 90 seconds before rolling the previews. If you’re seated in the theatre and your cell phone rings now, you’re really an asshole or a dipshit. There’s no excuse.

We also made a stop at the Dinosaur BBQ near downtown Rochester. The waitress sat down in the booth with us and chatted whilst she counted the cash in her pocket. We’d never met her before but she was very nice. The honky-tonk bluesy music was good too. So was the food.

Being a civil engineering student and all, I had to drive us through all the construction projects in the Rochester area to see how they were progressing. In case you’re wondering, they’re progressing nicely. I tend to take photos of signs too: 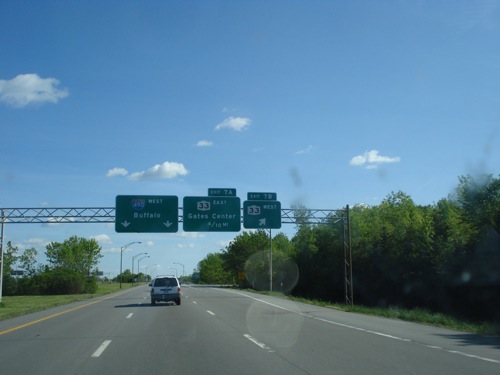 Notice Route 33 West doesn’t go anywhere according to the sign. It really goes to several places such as Chili, Batavia and Buffalo. Extra points to the first person that can tell me the proper pronunciation of “Chili”.