As I sat there on the first day of my second semester of college in 1987, I wasn’t in the best of moods. I was no longer a Music Education Major at SUNY Fredonia; disagreements on what I thought my singing voice should sound like clashed against what others felt I should sound like, coupled with feeling completely out of my element with an advisor who just didn’t “get me” ended with the declaration that I would be an Education Major with a liberal arts focus instead of a Music Education major. It just felt wrong. Since I was tagged with the “Liberal Arts” tag (which isn’t a bad thing, but it was to me at the time), I figured I would make the best of it and start exploring my rapidly growing interest in computer technology. Already on my second personal computer (a Commodore 64!) and having already discovered the world of online social connections, my fanatical obsession with bits and bytes was leaping 10-fold.

Then why the heck was I sitting in a beginning computer class where the professor was lecturing us on the difference between a keyboard and a floppy disk. We were spending an entire day talking about the power switch. I was going to go mad.

My interest in computers began at Wegmans. Back in the mid 1970s, Wegmans installed cash registers that scanned items. This was wicked cool. The process was fairly slow, the cashier had to be rather deliberate with the way the item was scanned and the register would usually fall behind and complain about the speed in which the cashier was doing their job, but my goodness that was wicked cool to me. I wanted to crack the barcode. It was seeing that that got me interested in all things technology related and I started comparing how Wegmans did their checkout thing versus our local P&C Foods (which didn’t have scanning, heck they didn’t even have electronic registers at the time).

I touched my first computer as a freshman in high school. It kind of looked like this: 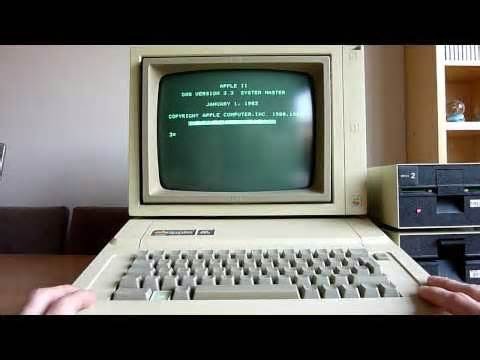 The computer lab in 1983 had 10 or so Apple ][+s and a couple of Apple ][es, which were in high demand because they could display lowercase lettering. We used these machines to run a BASIC program that coached us on what we learned in French class.

WHAT IS THE ORANGE?
L’ORANGE

We were told to ignore accent marks.

I was able to stop the program and look at the code within 15 minutes of starting my first lesson. I was hooked. Yeah, yeah, the French thing was mildly interesting but this computer was cool.

I took a couple of computer classes my senior year of high school and I honed my programming skills: Apple stuff at school and Commodore VIC-20 at home (budgetary concerns and all that). I had three really good teachers in high school; I shared programming ideas with the French teacher who had written that first program I had hacked into, I learned lots from my official computer teacher and to this day I still hear the echoes of the third who criticized my code structuring style, ultimately resulting in my writing more efficient code. My first programs emulated what I saw at the various grocery and department stores and they became robust enough that they actually developed into an accounting system that was used at the family store.

So why was I sitting in that Introduction to Computers class? Because I had to. Prerequisites and all that. “You don’t have the experience to take Computer 102.” I dropped the class the second week. I had already done the “Hello, World” thing. Heck, my “Hello, World” had been dancing around and transmitted to the other end of the country at 300 baud.

I was told many times that I would never amount to anything because I ultimately dropped out of college and I had no letters beyond my name to back up the skills I claimed I had. I wasn’t formally trained, so what could I possibly know? I decided to prove myself and interviewed for a job that required a two-day self-paced training program and rigorous exam. They were smug, but I was even more smug. I finished the whole thing in three hours and aced the exam. The resulting contract gig was good and it put some good entries on my resumé. But then prospective employers started wanting the letters again.

Long entry short, I finally found my way to where I am today and I think I’m making a really good contribution to my company and I love what I do. I’ve proved what I could do and I found my way by talking lots and being charming. It’s what I do.

Why am I rambling on about this?

I’ve heard mention of Edward Snowden’s dropping out of high school and not having a degree and the amount of surprise that some have because he was able to accomplish many things and work in important jobs within the CIA without letters behind his name. Agree with him or not, he’s one smart cookie and obviously talented.

I’ve seen men and women make lots and lots of money for their employers by being the smartest one in the group be passed up for a promotion or raise because there are no letters behind their name. I’ve been told that it’s impossible to do something in a computer program and that I didn’t know better because I wasn’t a computer science person, and then I was able to make what they wanted to make happen, happen.

Had I continued to listen to the folks that told me that I couldn’t be a computer guy because I didn’t have the educational background, I don’t know where I would be today. I know that I wouldn’t be as happy as I am in my career right now. I’m happy that I decided to stop buying what others were offering and to build my own path. Am I conventional? Hardly. But I’m here and this is where I want to be.

And I feel just fine, even with no letters following me around.