This is the first thing that I say in the morning. Up until fairly recently, this was something that I croaked out in the darkness, hoping for a response from my loving husband. But then bigger, faster, powerful technology entered our bedroom so now I croak this question at my smartphone. Sometimes Siri says something completely unrelated to my question like, “Playing ‘Stumblin’ In’ by Suzi Quattro’, but most of the time the Google Search woman says something like “it’s 49 and clear.” She sounds friendly but robotic.

I don’t know where Siri and Google Search get their answers from, but whoever answered me this morning was not correct in their assessment of the current weather conditions. Ignorant beyond belief, I dressed for cycling in 49F weather. I wore my shorts, threw a t-shirt on under my jersey and then put on my windbreaker and reflective vest. Once downstairs I put on my safety gear and hit the road.

It was then that I froze my ass off.

My legs were cold, but riding one or two hundred miles a week not only bulks my legs up enough to push a small Hyundai with them, but I also have legs that pretty much generate their own heat. It was not the most comfortable my legs have ever been but I could deal. No, it was my fingers. My fingerless gloves obviously weren’t built for whatever temperature it really was and they were starting to complain about 1 1/2 miles into the ride.

My original thought was to ride up into the hills this morning but because I paid absolutely no attention to Mr. Besaw, my freshman Earth Science teacher, I couldn’t remember if the temperature would get warmer or colder if I did that so I thought I’d play it safe and ride around town where the houses were closer together and thus, it would be warmer. 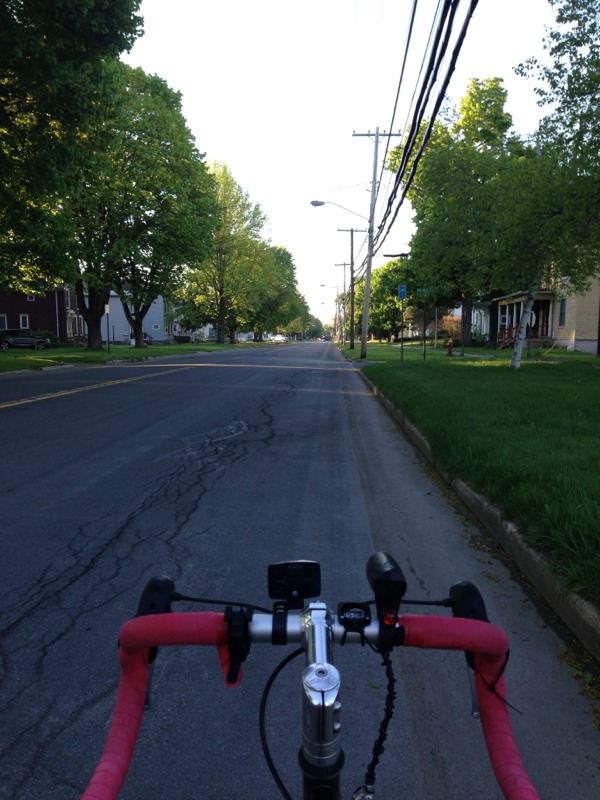 I ended up riding around 12 miles this morning and once the sun came up, I found the whole ordeal to be bearable. My fingers did their own sun salute with the sunrise this morning. There was joy coming from my digits once they felt the warmth of Sol.

And then I found happiness riding my bike again.