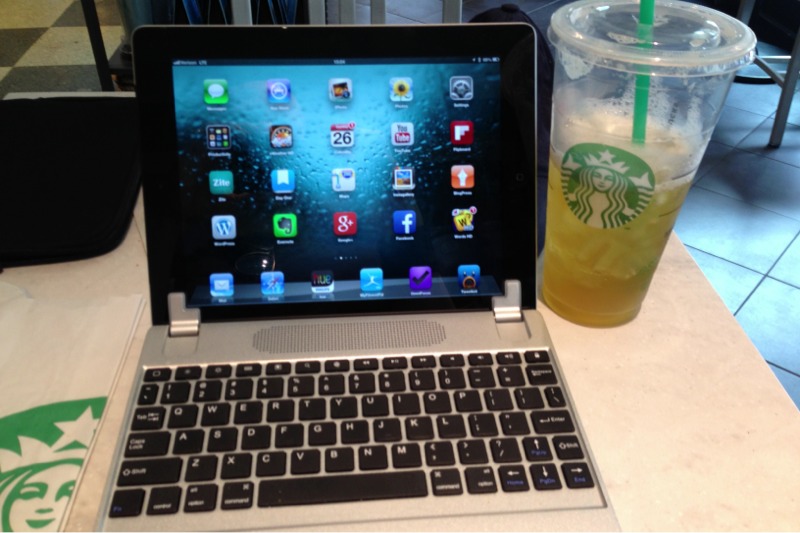 So I am sitting at Starbucks somewhere in the Windy City. I found this Starbucks by way of Siri and she led me to the way of one that is open on Sunday. It’s fun exploring a city electronically.

I’m indulging in my loner tendencies at the moment. Sometimes you have to get to the sidelines of the crowd and just watch others enjoy themselves. That’s what I love to do and that’s what I’m doing right now. This Starbucks is quiet. The counter people are friendly. There’s a man sitting near me reading tech news on his computer. He is bouncing his leg up and down.

Several people have noticed my iPad/Brydge combination. One person asked why my MacBook Air looked different. I explained to him that it wasn’t a MacBook Air, but rather a Brydge keyboard setup. He was impressed. I wasn’t trying to be impressive, I was just looking for a better way for me to efficiently write blog entries, but I have to admit that it’s kind of cool to be impressive.

As I’m typing this blog entry I can feel the eyes of another woman watching me type. I’m sensing it has something to do with the speed in which I type. To be even more impressive, I am now looking her in the eye whilst typing this sentence. I can easily do that. Perhaps I’m cocky.

I have to thank my mother for my typing skills. When the first electric typewriter entered our house when I was young lad, I was very intrigued and anxious to play around with it. Since I was so curious, she was instrumental in showing me how to type using the proper fingers. It’s something that stuck and is probably a major contributor to many successes in my life.

I’m still not looking at the screen as I type this. I am watching people instead. Sometimes you have to trust your instincts.

I don’t know a lot about Chicago. Earl and I haven’t spent a lot of time here, but with Jamie moving here later this summer, I think we’ll probably be learning more about the Windy City.

That’s not a bad thing.

There’s so much of to big wide world to explore.

So after watching the video of the SkyScreamer at Six Flags Over Texas and with the unofficial start of summer under way, I got to thinking about amusement parks and some rides I’d like to try this summer.

In Central New York we have a phenomenon called the “Field Days”. Usually run by a local volunteer fire company, Field Days are the town or community carnival, complete with awesome food, loud music, drunk people, a parade (complete with various competitions) and most importantly, a midway with rides and games.

I used to always love the rides at the field days.

Growing up in the 70s with a quirky sense of observation, I was able to ascertain that the vast majority of the fire companies would contract with Ontario Amusements to handle the Midway for their field days, however, the fire company in the town I grew up in would contract with Hawkins Amusements, which, in my opinion, had the cooler rides of the era. I think Ontario’s fastest ride at the time was called the “Merry Mixer”, which was really a Scrambler with four legs instead of three, whilst Hawkin’s most thrilling ride was the Hurricane, but they also had the Paratroopers and my second favorite amusement ride of all time, the Trabant.

The Trabant is sometimes rebranded as the Casino and there’s a new, faster version called the Wipeout, but the original Trabant is the one I love it. Like the rebranding suggests, it looks like a roulette wheel and I think it has 20 seats. The “wheel” turns, there’s another motion that causes the wheel to ride around a bigger circle and then as the ride progresses, it tilts upward to around 40-45% while this other circular motion is going on, which makes it feel very wave-like. In the full experience of the ride, the whole thing then pauses and does the same thing backwards. In full wave, the ride is quite mild but still fun, but when it starts coming down and the wave motion stops, the G-forces can be impressive as you’re pinned against the outside of the seat.

I have always enjoyed this ride and it’s one of the first rides I remember ever riding.

My favorite amusement ride, which rarely made an appearance in our area because it wasn’t found on an Ontario or Hawkins Midway, was the Tempest. 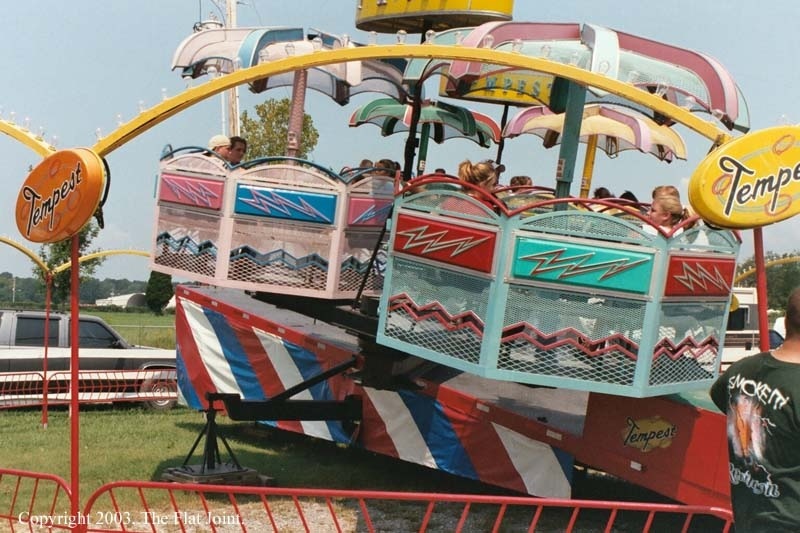 Finding the Tempest in our area always meant waiting until one of the very last Field Days of the season (the weekend after Labor Day) and traveling a bit of a distance to ride it, but I always looked forward to it.

The Tempest is basically two big arms with two seating areas on each arm, mounted on their own little arms. The principle is simple: the two areas circle each other while the two groups of arms circle each other. The individual seating areas can spin (sometimes they did, sometimes they didn’t), but like the Trabant, this is a ride that could mild yet breathtaking at the same time. 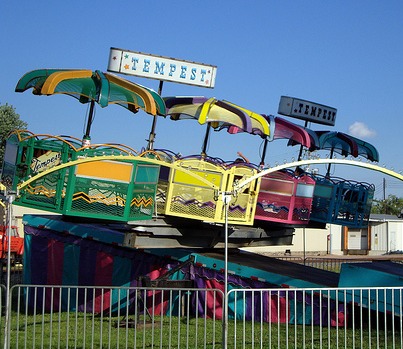 Thinking about these rides has made me want to seek them out again this summer. I don’t know that I’ll get to try to SkyScreamer this year, but I’m definitely going to seek out the Trabant and the Tempest. One of the things about both of these rides is that they’re becoming hard to find because of their age. I know Hawkins doesn’t have the Trabant anymore and I can’t remember the name of the midway company that featured the Tempest, so I’ll just have to keep an eye out for them.

I made a comment to Earl yesterday that even though I’m 44, I’m still just a big kid. I guess that shows through a little more when it’s summertime and the field days are rolling through our neck of the woods.