So a couple of weeks ago Earl and I were at the local casino for dinner and drinks and we decided to spend a little bit of gambling money while we were there. Earl went to do his thing in the Poker Room, so I took $40 and popped it into a nickel machine. Technically, I didn’t put the money in the machine because at Turning Stone you can’t do that; you put the money onto a card and then you pop the card into the machine and it keeps your balance. It’s kind of like an instant ATM card.

So I put $40 into the “Wheel of Fortune” game and a few minutes later my card balance was up to $360. It was at that moment that I decided to yank that card out of the machine and grab the cash from the nice lady in the cage.

Never one to let money just sit around when it could be used for some cool toy, then next morning I placed an order for a little gadget I’ve had my eye on for a while. Said gadget arrived today. 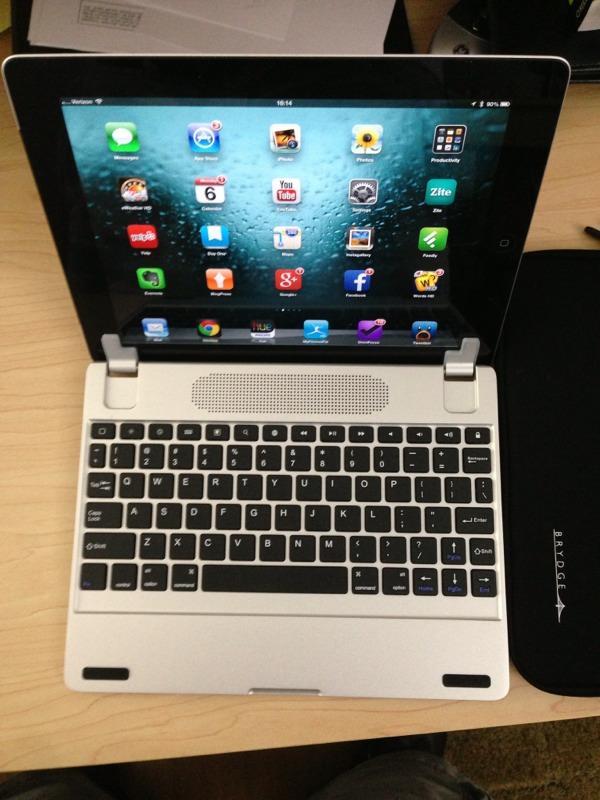 In case you’re not familiar with the ways of Apple, in the picture is my iPad 4 with a keyboard attached to it. The keyboard is made of the same materials as the iPad case and the cases of the iPad’s big brothers, the MacBook Air, etc. Through the use of Bluetooth wizardry, my iPad can now function like a laptop. This gives me the opportunity to write blog entries on the go again without having to try to fumble with the on-screen keyboard.

From unboxing to first use took less than five minutes. The only thing I had to do was swap out the shims on the hinge from iPad 2 mode to iPad 3/4 mode. These little rubberized guys hold my iPad in as snug as a bug and a rug. The hinges can take the iPad down to almost flat and with a hearty yank, I’m able to pull the iPad off the keyboard if I want to use it the way Steve intended.

The only thing that I have a slight struggle with is the size of the right shift key. If you have ever had the privilege of seeing me type in person, I am a really fast typist. Back in my heyday I could crack 100-105 WPM in typing competitions. Because of this, I’m really fussy about keyboards. The tactile response of The Brydge keyboard is amazing, but because the right-shift key is half the normal width of a regular right-shift key, I’m finding myself moving the cursor up a line instead of shifting the next key on more than one occasion. This is something that I will eventually get used to, after all, I’ve only had the keyboard out and functional for less than two hours, but my point is that it does take some getting used to. Other than that, I feel like I’m full speed on this keyboard, though it is slightly smaller than your average keyboard.

All in all, I wouldn’t say that this is a “must have” for the iPad but I would say that it’s pretty dang nice. If you’re looking for something that has the portability of the MacBook Air but still has all the goodies of the iPad, The Brydge is a nice companion to the full-sized iPad.