So as I mentioned in an earlier blog post today, I went on a road trip like I sometimes do when I have a weekday off from work. Along my travels I passed by the Maple Ridge Wind Farm, which is located near Lowville, New York along NY Routes 12 and 177.

Here is a shot of the wind farm from Route 12 as you’re headed north about three miles outside of Lowville. 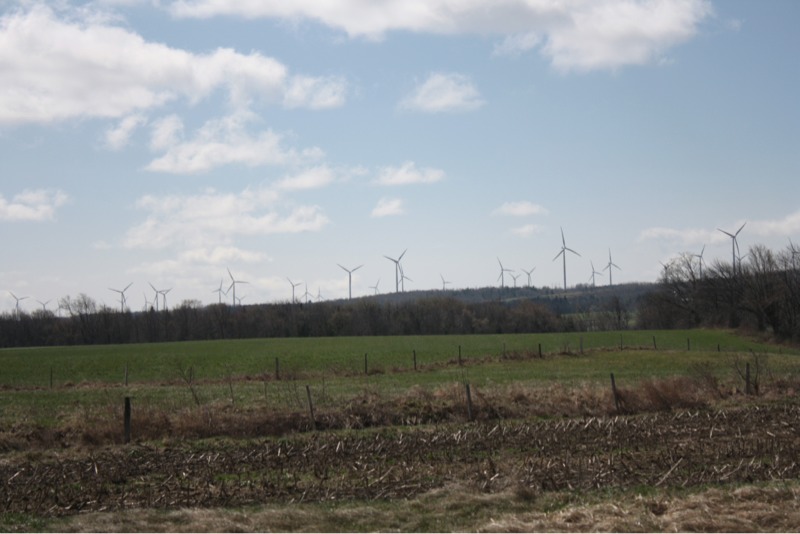 And here’s a shot looking towards the tiny hamlet of West Lowville, which is actually four corners where Routes 12 and 177 and one other road meet. The road that is headed up the hill is Route 177, which is one of my favorite roads to drive. You can click the photo to embiggen. 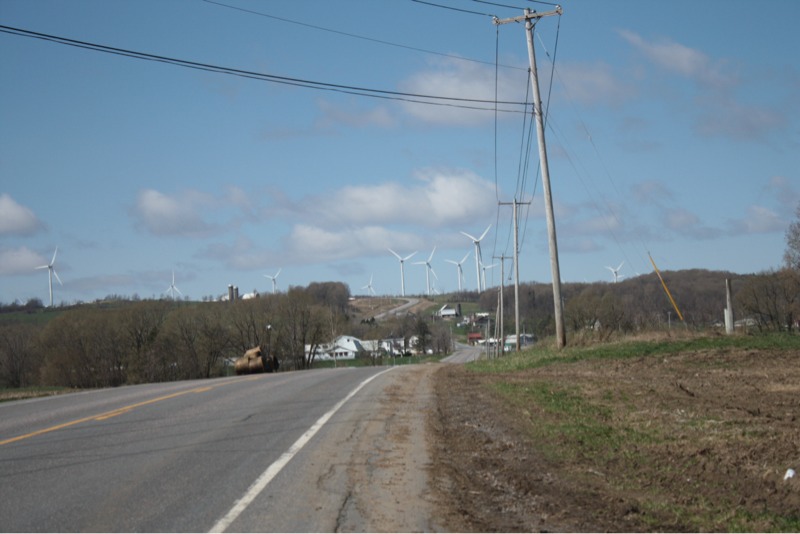 I decided to drive up Route 177 a little bit to see if I could get relatively close to one of the turbines. It was a windy day and I wanted to hear just how loud these turbines were. I have heard reports of people saying that they’re so loud that they can’t sleep. I’ve also heard reports of women having five periods in one month because of the turbine, but I think that’s just a symptom of being cantankerous. As I got to the top of the hill shown in the previous photo, I reached the Eagle Factory Rd. and noticed a little gazebo and trash can sitting in a field alongside the side road. Curious, I decided to go to it to see if it was some sort of information booth.

Fenced off on three sides so you can’t get to the turbines that are close by (at least without a Six Million Dollar jump), the gazebo has two little display panels explaining that the Maple Ridge Wind Farm generates enough electricity to power about 64,000 homes. 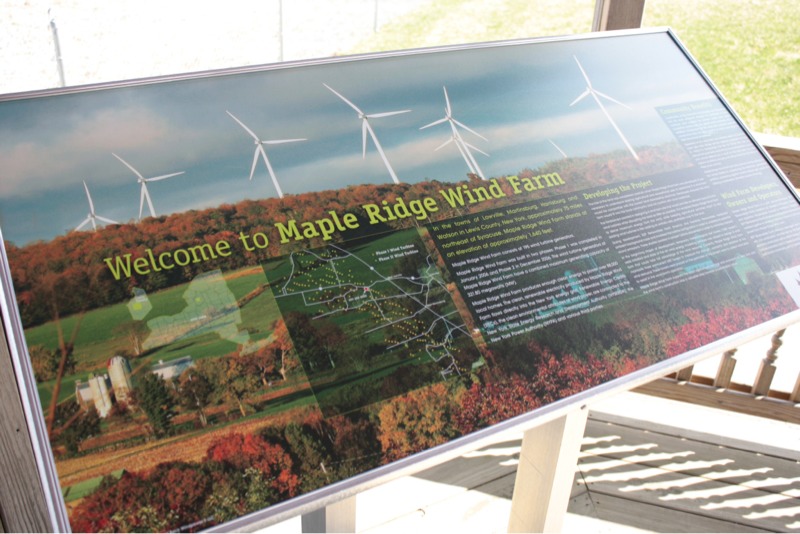 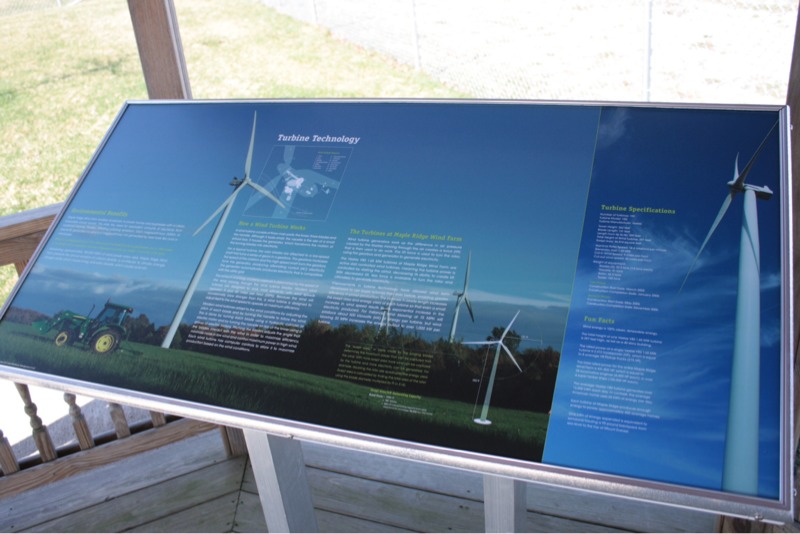 Maple Ridge Wind Farm didn’t have to put up a lot of powerlines; the turbines are connected together via underground cables that come to a common line that runs through the farm. That line then jumps onto a bigger line that runs about a dozen miles to a nearby line, which happens to be one of the highest voltage lines in the United States. Maple Ridge ties into that line, which runs from the Mohawk Valley (where most of the Upstate New York power is switched) to HydroQuÃ©bec near MontrÃ©al. 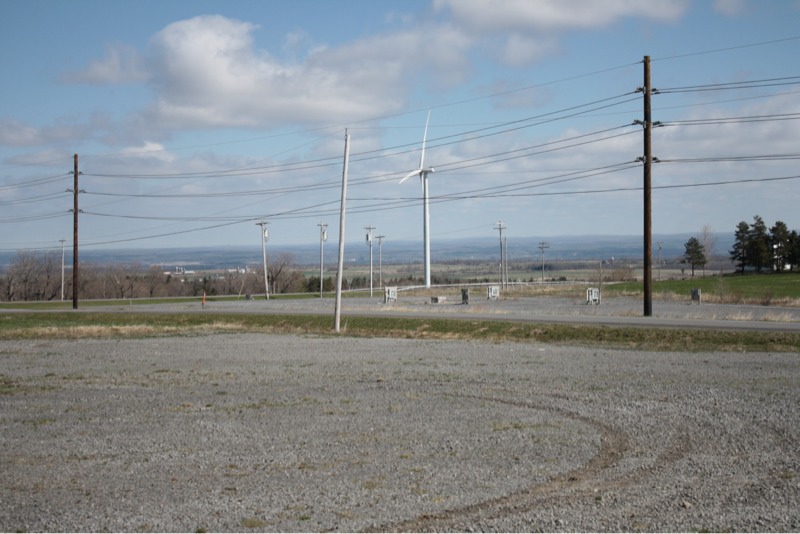 Looking northeast off of Maple Ridge Farm. The line near the row is the line that connects the turbines together. 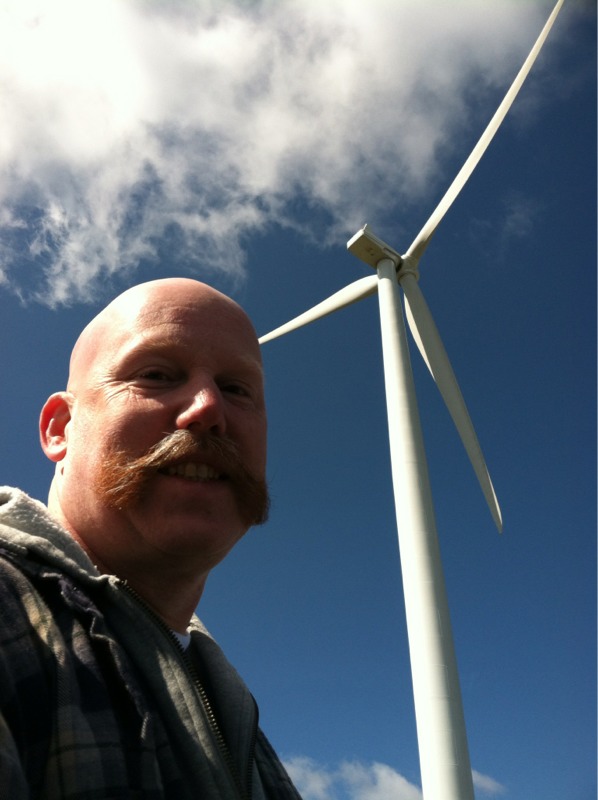 I recorded the video you see in the previous blog entry, took the photos and then continued on my roadtrip.

I can understand folks thinking that these wind farms may be intrusive on their land and their scenic view. Sitting atop the Tug Hill Plateau does afford one a beautiful view. And I don’t really believe that wind power is the ultimate solution to the energy needs of the United States, but I do believe that a combination of all the technology available to us (now and in the future) will build us the brightest future as technology progresses and we move towards cleaner energy and away from the older stuff that could be doing damage to the environment.

I have relatives that live not too far from where I stopped today. I’ve seen pictures of family gatherings up there and I have to admit that I found it a little startling to see these turbines in the background, however, I do believe that today’s technology allows us to do everything we can to make these turbines as nonintrusive as possible; they’re relatively quiet, they don’t add to pollution and these guys seem to be located away from areas where birds would seem to migrate (lakes and woods and such). Would I want to live near one of these? I probably wouldn’t protest the building of these if they wanted to put one in the field behind our house. I would see it as a reminder of American progress and our attempts to secure our energy future.