One of the things that Earl and I don’t really care for about this area is the lack of diners. Now I’m not talking about the wannabe chain diners like “Denny’s Diner” or other locations of that ilk, I’m talking about real, hometown diners where the food is made and cooked locally and the locals come in and pretty much know each other.

There’s a diner (as in an old diner-car type place) not too far from here and while the food is good and the staff is very friendly, there is just something about it that doesn’t feel overly comfortable. I don’t know if it’s because it’s somewhat run down or what, but Earl and I never feel overly compelled to go there even though we’ve never had a bad experience there. The other option is called Boulevard Diner and it’s in a regular building instead of looking like a diner. They recently remodeled that location and while it’s quite nice, it has more of a family restaurant feel instead of diner feel to it. Like the formerly mentioned, we’ve never had a bad experience but it doesn’t feel quite right to us. Earl doesn’t care for it as much as I do, so I usually end up going there when he is out of town.

A week or so ago, we noticed that what had been a closed down diner was open again. Since we rarely go by this location, we don’t know how long it has been open, but this morning we decided to go and take a peek. Like the “family restaurant” feeling diner, this one looked to be in a regular building instead of a diner car.

Walking into the diner this morning proved my suspicions wrong, because the building is built AROUND this old diner car that has been restored to an impressive state. Earl and I enjoyed our Sunday morning breakfast at Bev’s Place today and it felt like a diner, it smelled like a diner and the atmosphere showed us that it is very much a diner. Unfortunately, like everything that call itself a diner but isn’t attached to a chain in this area, Bev’s Place is not open 24 hours (sometimes you just want diner food at 3 a.m.) but I was able to order lunch during the breakfast hours today so I am content.

I snapped a photo this morning because I really liked the feel of the place. We look forward to going back again soon. 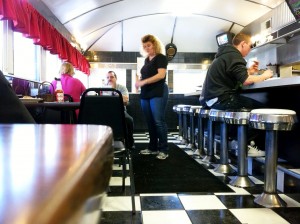