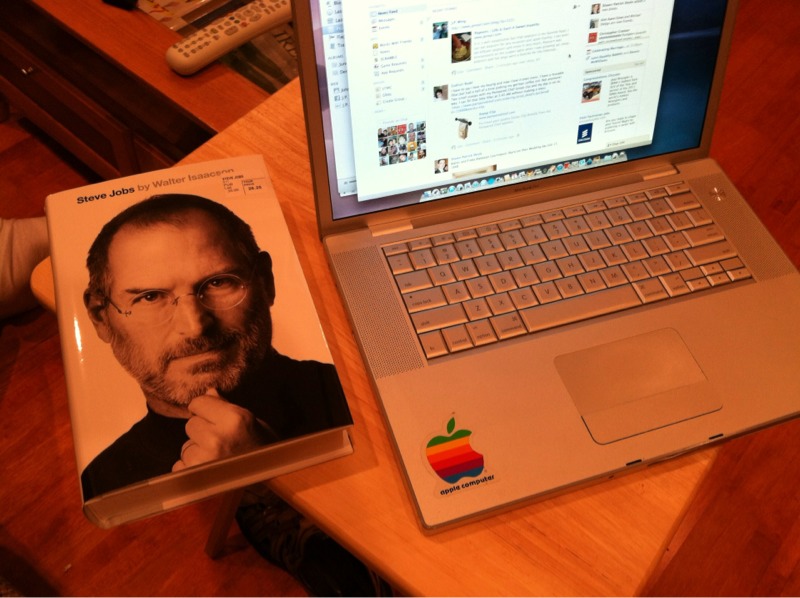 I have been spending a lot of my downtime reading the biography of Steve Jobs. This book is very well written and I’m having a hard time putting it down when I need to move on to something else (like sleep or eating, for example). I’m reading it on my iPad since I pretty much have the iPad with me all the time, but I also bought the hardcover edition so that I could honor the evolution of technology. Actually, I thought it would make a good coffee table book.

Even though I’m a pretty rabid Apple fanboy, I didn’t know a lot of the details of Steve Jobs’ life. I know that he could be very cranky in his interaction with others and that this was a result of his quest for perfection and/or reaching a certain vision that he had. Many describe him as a visionary. I don’t dispute that in the least.

I am surprisingly finding this book inspiring. I have mentioned before that I am working on The Big Project at work and there are some folks that want to make the software implementation “good enough”. I’m not willing to settle for that. I want to make this conversion to the new software, to borrow a phrase from Steve, “insanely great”. You see, I don’t think that I should be wasting my time doing something halfway when I can invest just a little more time and go all the way with it. It bugs me when a new version of Windows or iOS or OS X or whatever comes out and it is missing a feature or something doesn’t work, only to be told that it’ll be fixed on an update. I’d rather delay the implementation and do it right the first time than let the user down on the initial experience and sour their feelings on what should be insanely great with a bunch of error messages and the like.

As I make my way through this book I am discovering that I share a trait with Steve and that’s what I call my “extreme binary thinking.” Earl helps me keep this trait in check, but I have a tendency to say judge things on a scale of awesome to miserable without addressing the fact that the subject could actually be somewhere in the middle. As I said, Earl keeps me in check on this and I know that I can always do better in toning down this tendency of mine. Now I don’t go into group meetings telling folks that whatever they’re presenting in a pile of crap but I am visibly disappointed when I feel expectations aren’t met due to laziness. This, in turn, leads me to be rather harsh on myself when I feel that I haven’t met my own standard of perfection. I then get cranky when folks out in the everyday world don’t live up to my vision of the way people should be (for example, not knowing what you’re going to order after standing line for 10 minutes blabbing on your phone or worse yet, going up to the Panera counter and asking for fries.)

Reading Steve’s biography is helping me keep all of this in perspective and it’s actually forcing me to look at myself, my behavior and how I conduct myself both in the business climate and in the real world. Because I have seen the same tendencies in Steve, I am forcing myself to look for the positive and how we are headed in the right direction for the vision that I have, instead of dwelling on the negative and making people miserable. My progress can probably be measured in baby steps, but at least I think I’m headed in the right direction.

I’m looking forward to continuing this book. I highly recommend it to both fans and non-fans of Apple.