So this past weekend Earl and I saddled up Jamie and Scott and we headed to the Windy City for an extended weekend vacation. The occasion was a bear run called BearPride. The forecast for the event was that there would be big burly guys that like other big burly guys, and their admirers. The forecast was right. Lots of eye candy to behold.

Wednesday afternoon we headed west on Interstate 90. All was good and normal, including the mandatory construction in Erie, Pa. (why is Pennsylvania ALWAYS under construction?), until we got to Cleveland, Ohio. Where dark, ominous clouds littered the sky. The winds picked up, rotation in the clouds was evident and the skies let loose as the winds went crazy. As I was behind the wheel, we continued through the storm, watching many cars hydroplane and others try to drive through the flooded out roads, but we held our own and was only delayed a little bit. 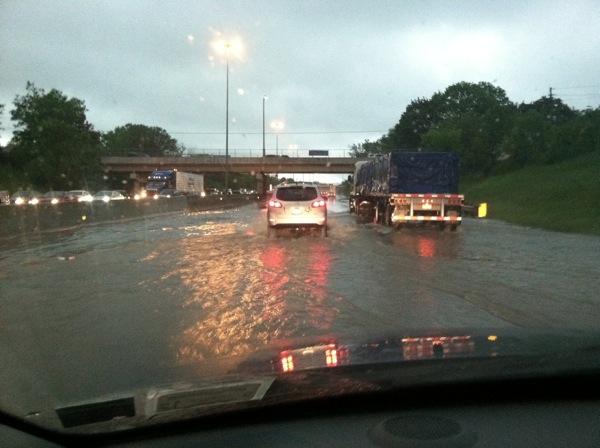 We ended up spending the night in beautiful Toledo, Ohio. We made the rest of the trek to Chicago on Thursday, where we arrived mid-afternoon. And it was cold. Very cold. Like 50Fs cold. But we didn’t let that dampen our spirits too much.

Thursday we socialized and ran into some old friends and made plenty of new ones. 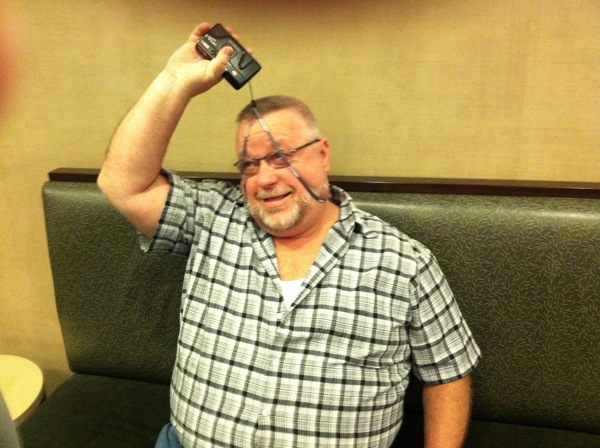 We stayed at the Crowne Plaza which is right next to Interstate 90. A good hotel, for the most part and a place I would stay again. It is on the edge of Greektown, so we went to a couple of Greek restaurants, an Irish pub and an Italian place. It all makes sense when you think about it in a worldly way. 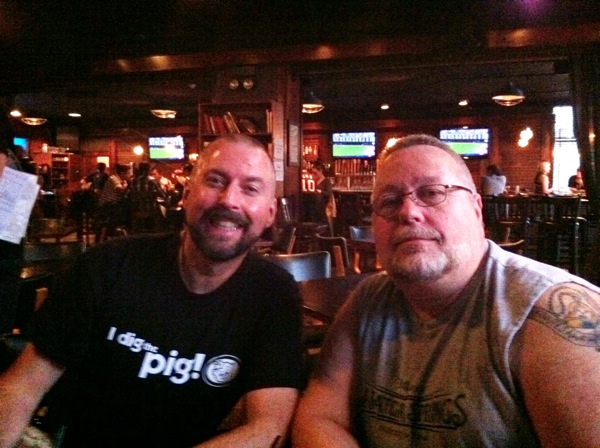 Scott and Earl at the Irish Pub. We were deaf because two women saw each other for the first time since college (which appeared to be a few decades ago) and they screamed so loud they shattered every beer glass within a five block radius.

Our view was quite nice. 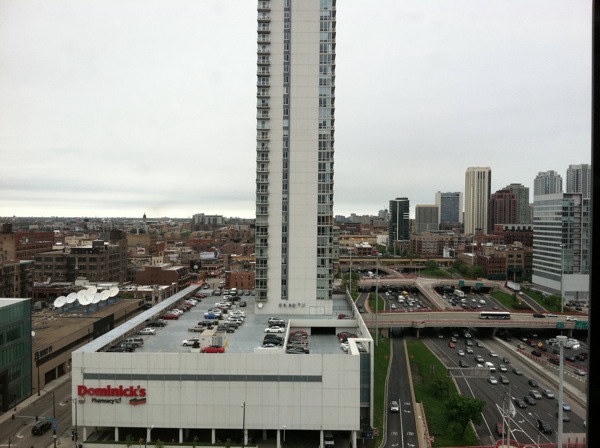 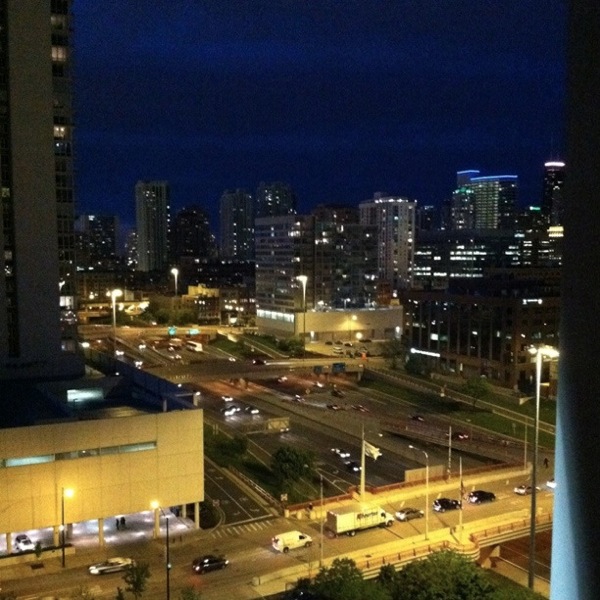 On Friday we met up with our friends Jeff and Mark from North Carolina. They were not at the bear event, but rather at the leather event at the Hyatt Regency on Wacker Drive. I am curious about this name Wacker Drive. It seems suggestive in some ways but it was an appropriate setting for the various goings on in the Windy City. Dinner was good. I think the place we went to was called McCormick and Schmicks. We are going to visit Jeff and Mark in North Carolina sometime this autumn. It’s been too long since I’ve seen them and now everyone else has met them and all is good.

Saturday night we went to the 80s dance party that didn’t have a lot of dance music but it did feature a lot of men dancing in boxer shorts. I opted to wear my Captain America boxer shorts with Captain America’s shield keeping me “well protected”.  Sorry, no photos were taken because I’m shy. We had a lot of fun though and it’s been a long time since Earl and I danced on a dance floor together.

On Sunday we went back to the IML (the leather event) to pass through the vendor mart and buy some things to spice up our life. It is there that I met up with a bundle of hot muscle, Brettcajun himself. I always like meeting other bloggers and Brett is just like he is in his blog. LOL. 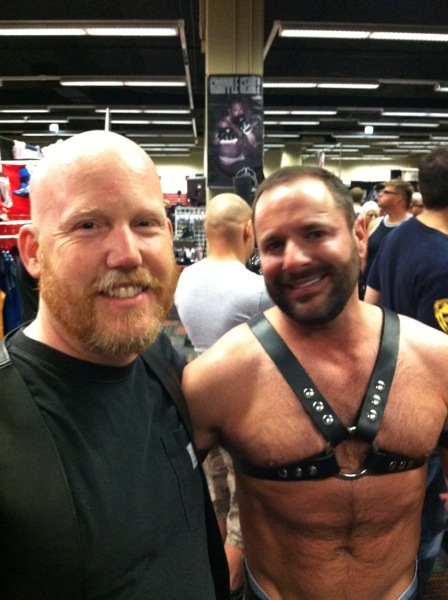 It continued to rain throughout the day on Sunday but at least it was warm enough to be able to get through the city streets without your beard frosting up. 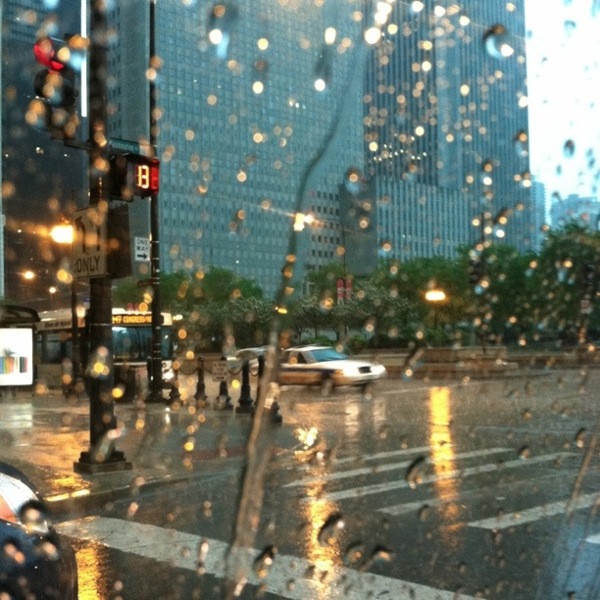 All in all it was a very relaxing and fun weekend for us and we were very happy for the experience. When we left on Monday it was sunny and nearly 80F. Mother Nature can be that way. 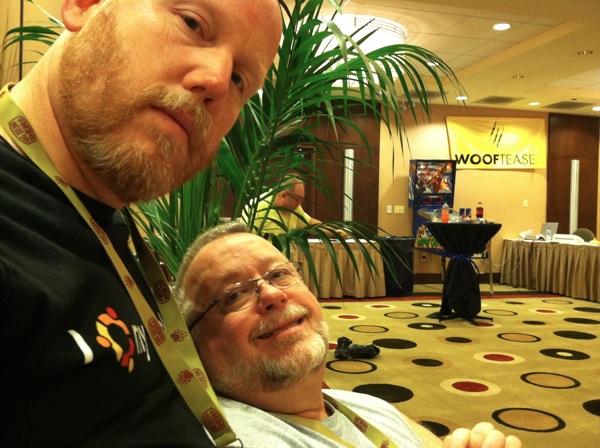