So last night I joined Earl and the Cubster in Erie, Pa. for “Drenched Fur 5”, a gathering of bears from all over for a weekend of bear fun, including a private party at an indoor waterpark.

Earl and Jamie got there Friday afternoon and set up shop in the vendor mall area, where they sold Jamie’s bear clothing. Business was pretty good, from what I hear, and the two of them are coming up with even more ways to promote the business and such. I think my web development skills have been enlisted for a new website.

I took the long way there yesterday, leaving the house around 10:30 and getting there at 6. (It’s usually a five or so hour drive). I drove through many small villages in the Southern Tier and could have done so all night, but when I realised that it was getting a little late, I hopped onto the the Southern Tier Expressway at Olean and used the fast route for the final 100 miles or so.

There is always LOTS of food at a bear run and this weekend was no exception. Attendance warranted overtaking the entire Quality Inn in Erie, Pa. and the hospitality was quite impressive. The dinner buffet was quite nice and Earl, Jamie and I made new friends and visited with those that we know from the community.

After dinner was relaxed a bit and hopped on the shuttle bus to the indoor water park, which was opened exclusively for the bears from 10 p.m. until 2 a.m. Jamie and I rode every water slide in the park (some several times), including the “Hurricane” where you shoot down at 40 MPH and get thrown into this donut shaped thing, spun around and then you fall through the whole in the middle into a pool underneath. Like the staff at the hotel, the staff at the water park seemed to be enjoying all the ensuing merriment of the bear run. By 1 a.m. we were wiped out and headed back to the hotel, after someone was kind enough to take our photo. 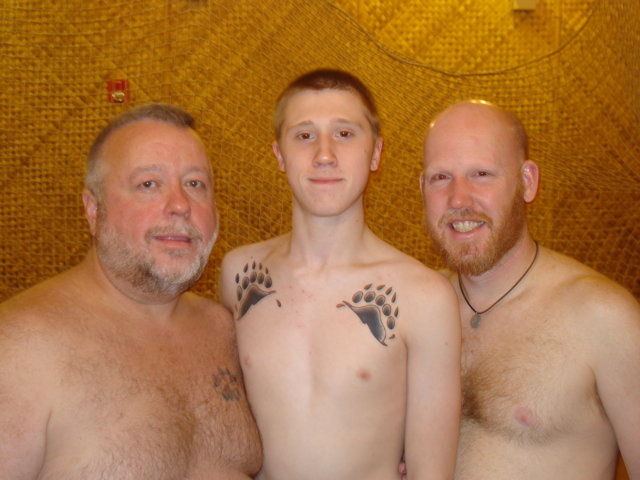 There was a late night buffet in place of the traditional after hours party. I had a quick snack and hit the hay relatively early for this sort of thing; Earl and Jamie lingered longer and came to the room a bit later, claiming that I was talking in my sleep when they got to the room. Unfortunately they won’t tell me what I was saying.

All in all it was a very good night and I’m glad I made the trek out there for the fun. I’m looking forward to next year’s Drenched Fur.