So after the breakfast buffet in Erie, Pa. (I rhymed again!) this morning, I headed home with the intent of taking the long way again. Earl and Jamie continued to sell clothing at the vendor mall through noon and then Earl drove Jamie back to Buffalo. The big guy is always the responsible one and takes the direct route of the Thruway.

On the other hand, I took a more leisurely route.

I have said on several occasions that I feel very grounded, connected, in touch with myself, etc. when I am behind the wheel of a car. As a kid I always had a thing about going for a ride, once I was licensed to drive I was ready to explore the world from behind a steering wheel. Erie, Pa. is relatively close to my old stomping grounds of the late 1980s and early 1990s, so I took the opportunity to do some exploring and see how much I remembered about the area.

Being a driving enthusiast, I have a couple of roads, stretches of road more specifically, that I really enjoy driving on for a number of reasons. These stretches tend to be rural in nature, with a very “open” feeling to them. I think that’s why I love the midwest so much, I like the flat, open feeling with long stretches of somewhat hilly terrain. I was able to drive on two of my favorite stretches today: NY Route 430 between Findley Lake and Mayville and then NY Route 242 between East Randolph and Ellicottville.

The drive along Route 430 was just as I remembered. Farms dot the countryside as you gently climb and descend hill after hill. There are only a few places where you have to slow down between Findley Lake and Mayville, and that’s mainly the village of Sherman. My mind drifted back to when I was 19 years old, with my first boyfriend and driving a 1977 VW Dasher along the route. It was summertime and we were off to a concert at Chautauqua Institution. I had convinced the boyfriend to grow a goatee (before it was fashionable on men in their early 20s) and he had forgotten to shave it off before leaving for the concert and was a little shaken up by the fact. I assured him that he looked good. He said he looked demonic. In truth, he didn’t look the part but later I found out that he somewhat acted the part.

The weather was splendid as I made my way to Mayville and then along Chautauqua Lake to the city of Jamestown (the birthplace of Lucille Ball and home of Natalie Merchant and the 10,000 Maniacs.)

Jamestown is a small city that seems to be struggling a little bit (though not as much as the cities further upstate). The downtown still looks charming, though not as bustling as I remebered it. 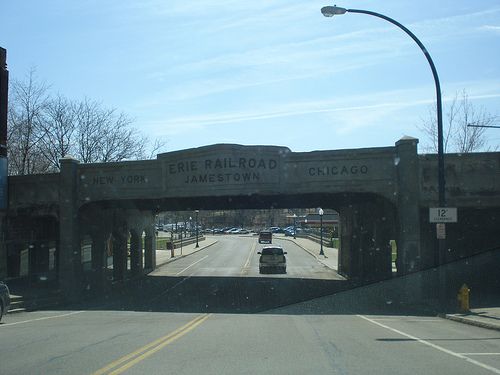 One of the cool things about this railroad overpass is that there are businesses built into the bridge. I remember being in the barbershop built into the bridge when a train came through and things rattling on the walls. It was a little disconcerting, especially when there were straight razors involved.

I explored around the downtown area for a bit before heading by my old apartment. The building looks like it should probably be condemned. It hasn’t changed much. A quick stop revealed that my longtime friend Pat was out so I didn’t get to startle her with a surprise visit. I did notice that many of the side streets in Jamestown are still made of brick. 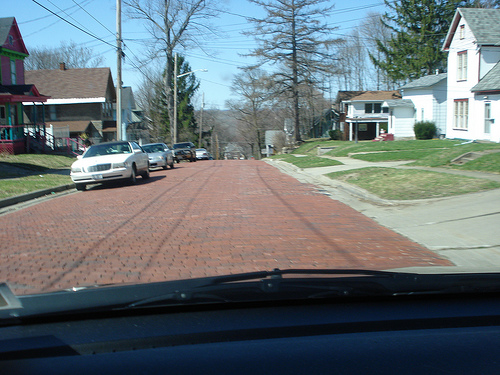 Heading east from Jamestown I drove along the two-lane roads to the small village of East Randolph, where I jumped onto Route 242, which headed in the general direction I needed to go to get home. Another rural road that climbs and descends through hilly farmland, Route 242 brought me through the ski-centric village of Ellicottville. The slopes were open today and there were folks enjoying spring skiing in the sunshine.

From there I headed to the other end of Route 242, in the Town of Machias. 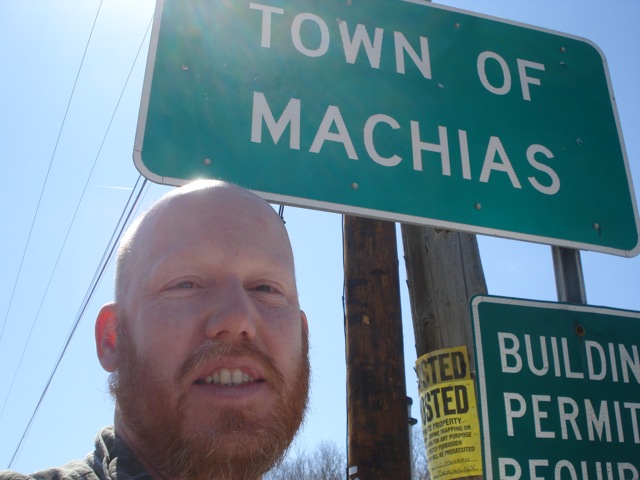 There is a very personal, self-dicovery related story to the small town of Machias that I’ll share on my blog someday when I’m so motivated, but for now I’ll say that the word “Machias” resonates with my very being in a way that no other sound does and that’s the reason I have adopted the online presence of “Machias” (and the Mac-centric counterpart I use, ‘iMachias’).

After taking the photos I realised that if I continued this pace I would never get home for work on Monday so I jumped onto Route 39, another one of my preferred stretches of road, where I ended up in Geneseo and jumped onto I-390 before jumping on the Thruway, almost an hour ahead of Earl on the same roadway. From there it was easy to get home and I let my mind wander.

As an almost civil engineer I prefer the design and such involved with the freeways, as a driving enthusiast I much prefer the two-lane roads. I’m happy I was able to mingle it up a little bit this weekend.