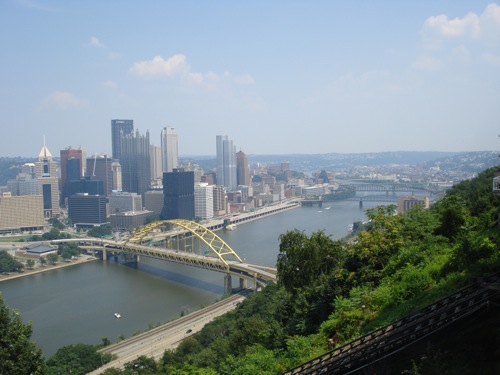 This morning Earl and I awoke in suburban Cleveland, Ohio and took a look at the weather forecast. There was a chance of showers if we headed north, but if we headed south it looked like clear sailing. We were originally going to head to Indianapolis, Indiana, but the drive home tomorrow would have been about 11 hours, plus we wouldn’t have arrived in Indy until mid afternoon.

We opted for Pittsburgh instead.

I’ve been to Pittsburgh a couple of times over the years. Back in 2003 we meandered through Pennsylvania on a ride and ended up here for the fourth of July. I distinctly remember the trip because I got a little tipsy at dinner and was enthralled with the fountains on Station Square as they danced to “Love Hangover” by Diana Ross. The fireworks in the background made me misty. The fountains are still there. This afternoon they danced to some heavier rock stuff. I remained sober.

We’ve been scouting around the city doing the tourist thing. We rode up the Duquesne Incline, walked around Mt. Washington a little bit and then rode back down on the Monongahela Incline. I think I like the first one better for the simple fact that it has open air cars in the summer and it is wicked hot here today.

We also milled about the festival atmosphere of Station Square and did some walking around downtown. We are taking a brief respite from the heat before heading out tonight for a night out on the town. I’m looking forward to the experience.

There’s a few random pictures in my shiny new MobileMe gallery. You can find that by clicking here.

Oh, I’ve also been getting tips from folks on Twitter as I update our location from time to time. This is why I love technology.