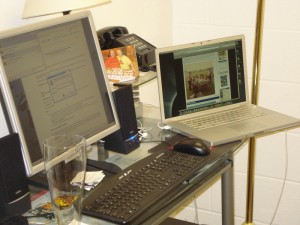 I added a computer to the studio this afternoon. I found a really good deal on a display computer at Best Buy whilst I was browsing around. I had been toying with the idea of adding a Linux desktop to the stable and this computer was perfect for the project so I made the purchase.

The new computer is made by eMachines and has a decent AMD 64-bit processor with 1GB RAM. It has room for upgrades which I’ll most likely being doing over the next year or so as needed. I have it running OpenSuSE Linux 11. I’m liking the experience thus far. It’s good to have a computer to play with without mucking up the Macs too much as I tinker.

Many of my vivid childhood memories are pre-1977 which was the year we moved into the new house. Before moving we lived in a 10×55 mobile home with a 10×50 addition that my Dad had built shortly after my sister was born. The mobile home sat on a piece of property next to my grandparents. It was in the middle of a cow and horse pasture. Two sides of our back lawn were surrounded by electric fence. My Dad built the new house, a two-story colonial that he still lives in today, across the street from the trailer. Aside from some help from the two guys that worked at the family contracting business, my uncle and my grandfather, my Dad built the house pretty much on his own. It took him two years.

Four people living in a small mobile home was an interesting experience. During the summer we’d have one more living with us; one of my city cousins would come up for some “fresh country air” for a week. There was one bathroom and if we needed to go when someone was in there we’d run across the lawn to my grandparents and use their guest bath near the side entrance to their house. The addition to the trailer allowed for us to have a laundry room, but it was small and only had room for the dryer. The washing machine was in the bathroom. My parents’ bedroom was in the addition and utilized the original back door to the trailer. I don’t know how they had sex because the door was rarely closed. There was a gun rack built into the wall. The third room of the addition was the living room. The old living room in the original trailer became the dining room. It had a small round table that barely sat the four of us. My sister and I shared a bedroom, complete with bunk beds that took up the length of the north wall. Mom once tried to give my sister her own room by splitting the bunks and using the small bedroom behind the furnace, but it wasn’t long enough for a bed. Only a crib would fit in there and she had outgrown that years ago.

I like to think that living in the trailer kept us a close family as there wasn’t really any place for us to escape away from each other. Summer afternoons were spent romping around the farm; I’d hop up on a tree stump and jump into the fenced in pasture and do my own version of running with the bulls. The cows didn’t care if we were in the pasture, but once in a while a bull would get cranky about it. If I yelled “boo” in his direction really loud, he’d stop heading towards me. I’d then run to another tree stump in the pasture and jump back over the fence to my own side.

One of my favorite memories from the trailer was a birthday party for my sister and I. Our birthdays are five days apart and we shared a family birthday party. My city cousins and aunts would come up with Grandma and Aunt Jenn; it was one of the rare times that my city cousins would mingle with my country cousins, who lived relatively close. We’d have a cake that my Mom made, complete with those pure sugar candy letters and numbers from the Acme.

When I think back to the happiest times of my childhood, it’s often to a time when we lived in the trailer. 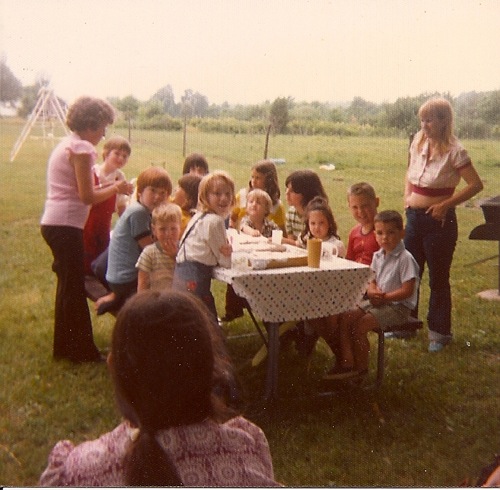