Today is my birthday. And I am going to type this with a strong, confident voice: It was FORTY years ago today that I made my first appearance. That’s right, as of today I am officially 40 years old. My parents were young when I was born: my Dad had just turned 21, my Mom was 20. I am the oldest of two. My sister is two years and five days younger than me.

Back when I was in my early 20s I thought I was on top of the world and knew everything. Looking back, which was halfway to this moment, I realise that life has only gotten better as time has moved on, because NOW is when I feel like I’m on top of the world. Life is grand and I have no complaints. I complain from time to time, but that’s all trivial stuff. It’s bellyaching that I really shouldn’t indulge in.

Looking through pictures last night I found a couple of shots from various birthdays. I thought I would share them. First up is 1974. This is my sixth birthday party and if memory serves correctly I was sharing the party with my sister, who was celebrating her fourth. We had a few friends and distant cousins over for the festivities. I’m the one with red hair. My sister is sitting to my left. My mom is taking the picture, that’s a cousin once removed on my father’s side helping out with the festivities. 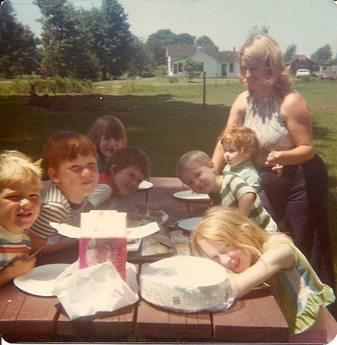 Next up is 1978. In the late 1970s my father was taking lessons to become a private pilot, so most of our Sunday afternoons in the summer were spent at the local airfield. If you look closely you can see a Cessna 172 parked in the background. We’d have a picnic with the pilots association and my sister and I would join our airport friends climbing trees or scaling the wall between airplane hangers or picking wild strawberries along the runway. The woman making sure I’m not falling off the picnic table is named Lavinia. We called her Vinnie. I always thought that her named implied an southern accent, but I don’t recall her having one. There’s felt tip marker marks all over the photo. That sometimes happens. 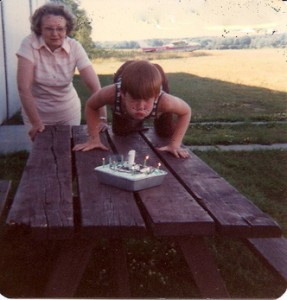 In 1991 I worked for The Resource Center in a community residence for developmentally disabled adults. I worked on my 23rd birthday and then went out to the local bar that night alone. The folks at Hunt Road CR had a little birthday cake for me; here I’m given my birthday kiss by one of the ladies that lived there. 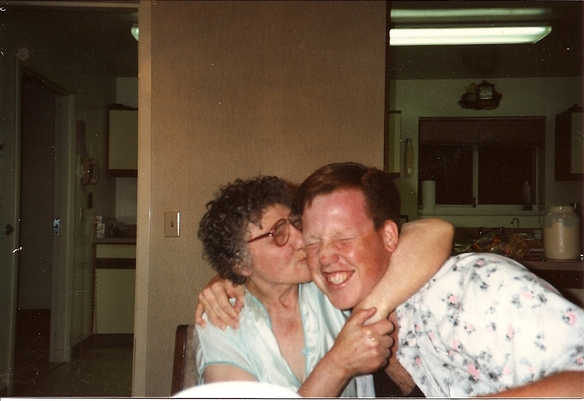 In 1997 Earl and I drove to Walt Disney World that July. We ended up at his folks on the way home right around my birthday. I was turning 29 years old. We were a little more than a year into our relationship and still getting to know each other. The honeymoon lingers on today. 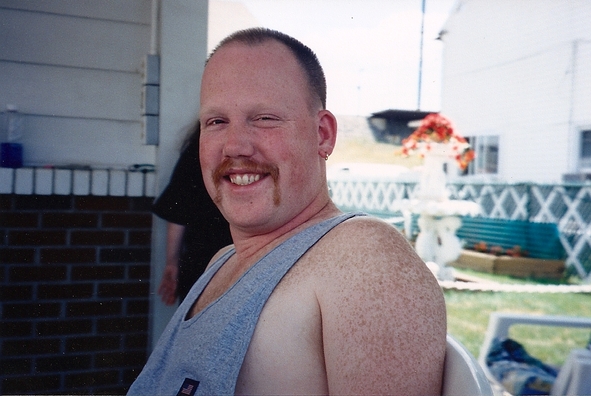 I feel great as I start this new decade of my life. I’m looking forward to what lies ahead.