It’s a little after midnight and I am cuurently in the middle of a DJ gig. Pink’s “U + Ur Hand” is playing. The floor is moving well.

I have all the lights in the DJ booth turned off. The door is closed. I find solace in being alone im my own space in this public place. I’m behind glass silently watching the crowd. Few realize I am here. I like that. Yet if I were to leave the song would stop and the party would end.

In my own way I’m cleverly in control of the entire situation. I like that.

Up until 1986 my grandmother handled the accounts receivable for the business. She posted invoices and credits to the customer accounts and then at the end of the month, working with my grandfather they would send out the statements to the customers that owed money. She did all this accounting on a mechanical NCR posting machine, which looked like a large adding machine from 1971 that had a typewriter style carriage on it; the adding machine would do the tallying in the appropriate columns, “Debit”, “Credit”, “Balance Due”, etc. It was the norm back in 1971. In 1986, computers were taking over the duties.

In 1986 my aunt took over (for the most part) the accounting responsibilities of the business from my grandfather. I handled the accounts receivable that summer and would work part time when I was in town through the early 1990s. I learned the whole process simply through observation. In 1989 I decided that they needed to computerize the whole ordeal. I had worked part time as a temp writing accounting programs for a cash register company near Boston, so I wrote an accounts receivable program that was a drop in replacement for the mechanical posting machine. They still used the same statement forms and ledger cards. The program ran on a Radio Shack TRS-80 Model II that I picked up for 50 bucks.

The computer has been replaced twice since then but they are still using the same program today. It runs on a snappy 286. They’ve been having issues with the system over the past month or so so I drove up to do some maintenance on this ancient computer and software. They had also lost the capability of doing backups because the 5.25-inch floppy drive had died.

Rummaging around through the old computers I found a replacement floppy drive and after about an hour of work I had the system up and running once again. Talk of upgrading was minimal, because if it ain’t broke there’s no sense in fixing it. I think it’s ready to last another 15 years. 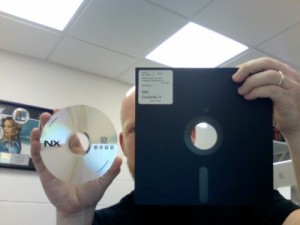