I’m trying to decide if I like Alec Baldwin these days. This picture of him from years ago helps me sway my decision a little bit, but just a little. 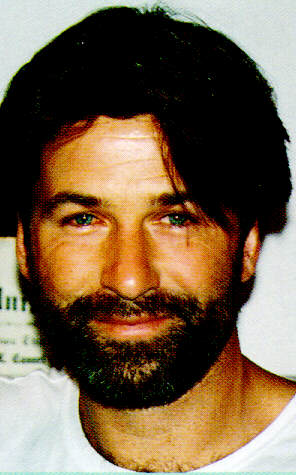 Of course Alec has been part of the latest breaking headlines from Hollywood, after he left a very ridiculous, sad and unbelievably angry and hostile voicemail for his young daughter, Ireland. Yesterday he appeared on “The View”, in a double segment no less, where he joined Barbara Walters and Rosie O’Donnell to give his side of the story of what actually happened and the aftermath of it all.

Alec is now heading up the cause of “Parental Alienation”. He is trying to bring awareness of this to the masses. He has also written a book which will be released in September. Per his appearance on “The View”, Alec wanted out of his contract with NBC for “30 Rock” so he could focus on this instead. Sources say NBC responded with a “no”.

O.k., he said some hateful things to his daughter on that voicemail message. Let’s face it, you really shouldn’t call anyone a pig and especially not your family. Alec knows that. He lost his cool. He took out frustrations with his ex-wife on his daughter. I think that’s readily apparent. It doesn’t make what he did acceptable by any means, but people lose their cool and they need to learn and move on from the experience. But you know what, that message should have never been made public in the first place. Years ago I went on a rant that rivaled Alec’s voicemail performance. I sure as hell wouldn’t have wanted that rant to be seen by anyone in the general public. It’s amazing that I can interact with the target of my venom once in a while and have it be an amicable experience. So in a way, I feel for Alec in that regard.

But what kind of creeped me out was the whole interview itself. Barbara Walters desperately tried to go into 20/20 mode, but Alec wasn’t having any of it and pretty much steered the direction and tempo of the interview. Barbara was visibly uncomfortable with this. Rosie looked like she was a little uncomfortable as well but for different reasons. This style of interview is not her forté and she certainly gets an “E” for effort.

I guess I felt that Alec was trying too hard to do damage control. To me it felt like it was too soon for this sort of thing. He looked like he hadn’t gotten much sleep, he stammered and stuttered a little bit and while I appreciate the scruffy face, he really should have shaved if he wanted to put his best face forward so to speak. People notice that sort of thing.

So do I like Alec Baldwin? I guess time will tell. I’ll download “30 Rock” and catch up on it this summer. I’ll see how he behaves in the future.

For now I’ll keep enjoying his scruff in the proper situations as well.