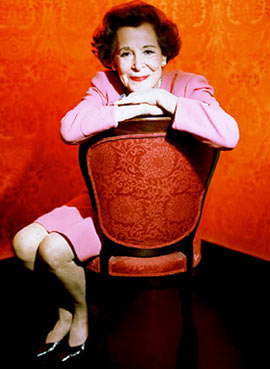 Kitty Carlisle Hart, well-known as a panelist on the game show “To Tell The Truth”, passed on last night. She was 96.

Still touring and performing right up until the end of her life, Kitty was an accomplished performer on the stage, both as an opera singer and actor. She also was the only person to appear on *all* incarnations of “To Tell The Truth”, her last appearance on that show was at age 92.

Here’s a link to the best remembered version of the theme song for “To Tell The Truth”.

I am sitting in lovely Syracuse, N.Y. in the food court at Carousel Center as I type this blog entry. I had no intention of coming here today, but I’ve been riding around in the car and decided that this was as good a place as any to stop for a bit.

I’ve been riding around because I’ve decided to take a new approach to my vidcasts. I have retitled the feature “Let’s Go For A Ride”, and I videotape them as I’m driving. I’ve done two so far and as soon as I get my YouTube channel set up properly I’ll be sure to post the link so the curious can indulge themselves.

Carousel Center has high hopes of becoming the largest mall in the United States soon. For the past ten years or so the developer has wanted to turn this into “DestiNY USA”, which would be a huge tourist attraction with hotels, an expanded mall, an indoor park and many other visitor friendly attractions. They’ve also mentioned developing a monorail system through the city of Syracuse to go hand in hand with this venture. So far a few symbolic beams of steel have been pounded in the ground as the developer and the local politicians fight back and forth about tax benefits and other assorted widths of red tape. I’m not as informed on the topic as I’d like to be, but I’d really like to see something positive happen in this area and I can’t help but think that this venture would be a positive thing for all involved. But what do I know, I’m just a college student with a big mouth and a blog.

One little delight I hadn’t planned on was the new Chicken Salad Frescata sandwich at Wendy’s. I usually don’t equate “yummy” and “Wendy’s” together, but I found this sandwich to be quite enjoyable. I highly recommend it.