Earl worked late tonight so I took the opportunity to head over to my Mom’s house for supper and to fix her ailing computer. I hadn’t seen her in a while, so it was a little visit to look forward to, even if I did have to fix her Windows computer.

She recently when through some boxes of her stuff left over from when my parents separated a number of years ago, and came across a our family picture from December 1978. Since I’ve somehow become the unofficial family historian, she gave it to me. I haven’t seen this picture in a long while. I have to admit it brought a little lump to my throat since it reminded me of the rush of the holidays when I was a kid. I thought I’d share with the class. 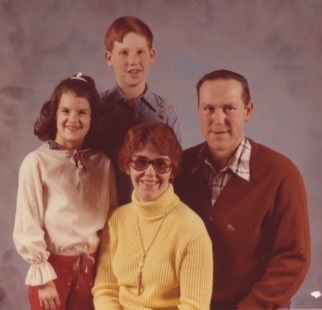 The first day of December is marching right by. It’s starting to feel like winter with the overcast sky and the colder temperatures. It should be a lot more snowy up here in Central New York, but right now everything is a dull brownish green.

Earl and I took a drive last night through the really snobby sections of town to see their holiday decorations. It must be a little early in the season or something because there didn’t seem to be a lot of them up. Perhaps people are lazy. There were some decorations that were downright tacky. I was hoping that icicle lights fad had died down, but no such luck yet. I have yet to see a real icicle flash in unison with the other icicles along the roof. And such color! I was always taught not to eat yellow snow, why should I admire a yellow icicle?

What I find really depressing are these gigantic blow up characters people are putting on their lawns. First of all, they’re tacky. Very tacky. Secondly, they look absolutely awful when they’re deflated and lying all over the lawn like a bunch of discarded laundry. What’s even worse is driving to work at 6 a.m. and seeing these ugly things slowly deflate and fall down in a crumpled heap as you’re driving by. I don’t want to see Santa or Rudolph literally fall to pieces in front of my eyes. It makes the kid in me sad.

What happened to the days of some nice colorful Christmas lights wrapped around the poles holding up the porch roof? Maybe a lit up snowflake or two. Perhaps a wreath. It seems like people are trying to outdo the crash commercialism found in the mall decorations. “This baby Jesus brought to you by Wal*Mart.” And don’t get me started on mixing up Christmas symbols and themes. Newsflash: Mary did not get it on with Frosty and then give birth to Santa Claus. They shouldn’t all be standing in the same manger.