A Day In The Life.

Here is the first picture I’ve taken with my new camera, a Sony Cybershot DSC-S40. I had mentioned to Earl that I was tired of taking photos with my cell phone because the camera in it wasn’t that good. I’d rather use a real digital camera and upload photos on my laptop instead of doing the cell phone thing. We have a beautiful digital camera, a Sony Cybershot DSC-F828, which takes absolutely gorgeous pictures. Unfortunately, it’s a little too bulky to use for spontaneous shots out in the wild. With my new baby Sony camera, I can now take quality shots and share them on my blog. I’m am psyched about it.

Earl and I are winding down after an absolutely wonderful Christmas day. We got in last night around 1:30 a.m., slept most of the night and got up early around 7:30. We opened presents… oh wow, the things I have. Wonderful gifts include my aforementioned Sony camera and a Hercules DJ Console which will allow me to spin at clubs using only this new console and my PowerBook G4.

Mom stopped by around 10:00 for brunch and merriment. As I mentioned in the previous entry, we kept in touch with my sister and her boyfriend in Russia throughout the day via webcam on MSN Messenger. It’s good to see technology contributing to life instead of just making it a little more chaotic.

Dad and Karen stopped in around 3:00 for dinner and great conversation as well. It’s nice to be able to honestly say that we had an absolutely wonderful Christmas.

Per tradition, Earl is now relaxing on the couch watching television and getting ready to nap while I sit on the loveseat, blogging with Tom curled up near my feet.

Festive times with family and friends- that’s what Christmas is all about.

Where would we be without technology? Here it is Christmas day and for the first time in my life, I’m not going to see my sister in person to celebrate the holidays, since she’s currently living in Moscow (the one in Russia) with her boyfriend the hockey player.

I miss her very much. We never fought much as kids and she usually went along with any scheme I had, whether it was to host a huge parade at my grandparents utilizing all my cousins, a few wagons and a smattering of batons or the time I was driving her to town to pick up contact lens solution with dad’s truck, even though I couldn’t drive a stick at the time. (I slowed down to a crawl so she could hop out in front of Ames, then I did laps around the parking lot until she hopped back into the moving truck). My sister has been at my side through thick and thin.

Thank the Universe for technology. I’ve forgiven her for using MSN Messenger (instead of the iChatAV compatible AOL instant messenger), but it’s nice to be able to show Christmas presents and chat on the webcam, even though we are literally thousands of miles apart. 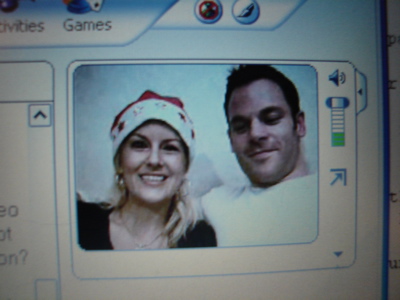 Earl posing in front of his Dad’s in suburban Philly on Christmas Eve 2005. Notice how beautiful the weather is. It felt like mid-March outside, but the mood was festive inside.