I’ve received a couple of e-mails from people that have stopped by that they aren’t happy that I instituted “registration required” rules on my comments form. The reason I did it a month or two ago was because my early blog entries were being flooded with spam. Oy.

I’ve changed back the comment system back to the old way of doing things. If you have something to say, feel free to say it without having the register first. 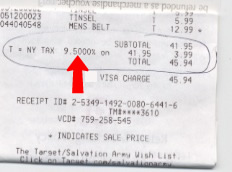 They certainly know how to take the zing out of your holidays/Christmas shopping dollar around here, don’t they?

In these parts, tax is applied to anything that can’t be consumed, and only if it hasn’t been prepared. Clothing, underwear, shoes, blankets, hats, gloves, pop, candy, potato chips, hamburgers – all of it taxable in the Empire State.

Sears and Roebuck Co. (are they still called that anymore?) succumbs to this ridiculous controversy of “Merry Christmas” vs “Happy Holidays”. Their solution? Print “Merry Christmas” with the Sears logo, using a generic font and plain paper on a black and white laser printer to add a little “ps.” to their holiday decorations.

The sign pictured above was actually the best looking display of this merriment in our local store, the other signs were hung with shipping tape next to the “now hiring” and “this door out of service” signs.

This could be a “too much information” entry for the squeamish. If you press BACK on your browser you’ll be ejected from your seat immediately. Thank you.

As I just typed the title of this blog entry I realized that it could be a really good porn video title. Picture it, two men have hired a domestic; a houseboy from Oklahoma who’s never been in the big city before. He cleans only in his skivvies or better yet, completely nude. Well, he can still wear his cowboy hat. He is innocently dusting off a steam radiator, which happens to be leaking steam, bringing beads sweat to his broad, muscular, hairy chest, when we, I mean the guys in the video, happen to spot him bending over to pick up something that has fallen on the floor…

Anyways, I sometimes wonder how couples manage to get initmate during the holidays. I really don’t understand how straight couples manage it at all with families to juggle and all that. Kids running around, banging on the door, demanding one last glass of water or a reprive from the boogie man in the closet, where does one find the time?

I’m often chattering in my blog that I’m not a morning person. I’m not. Except when it comes to lovemaking. I love to wake up in the mid-morning, roll over and tap the bear lying in the bed (hopefully it’s Earl!) next to me with a hopeful, aggressive, yet innocent look on my face. Bat, bat, bat go the eyes. That most of the time. Sometimes I like to roll over, shake the bear next to me awake (hopefully it’s Earl!) and say, “I want to ^@*#$ right now!”. You can use your imagination for the verb of that last sentence.

This morning I did the coy routine when I awoke. At least I was about to when some crazy neighbor lady started banging on the door (and he deflates) shrieking about the cat she has in her house. She wants to know if it belongs to us. Earl pads down stairs in his barefeet and informs her that we have our own cat and he happens to be in the house. “Where did he come from? What does he look like?” So Earl shows Tom to the neighbor who proclaims, “Oh, that’s not him.” From there the conversation got really murky. So Earl kind of shooed her off. She is now officially the “crazy cat lady”. She’s the same one that rings a cowbell out on her back porch around 11:30 at night during the summer. We now know she’s beckoning cats.

Anyways, since Earl was now motivated to get going, he threw a load of laundry in the washer and brought up the clothes from the dryer that have been there for two days. That’s why irons were invented, in case you’re wondering. As we start to fold the clothes together, I said to him, “we need to hurry.”

“Why, are we going out for breakfast?”

Once we got the used Bounce sheet out of the way, we were good to go.