When I’m up late for work and can’t sleep for whatever reason, I sometimes reminisce about my younger days working the second shift. I’d start work at 3, right in sync with my own circadian rhythm and would get home around 11:00, ready to settle in front of the television (armed with a bowl of popcorn) for a couple hours before calling it a night. This was before the internet, when I’d have to dial into the local BBS (bulletin board system) or GEnie with my ancient computer at 1200 baud and $2.95 an hour to chat with other guys – and they were all geeks. And there were no pictures, only characters literally crawling across the screen.

Not an efficient way of meeting people.

So I’d tune the television to the good cable station “11 Alive” out of New York, later known as WPIX (now the WB11). I’d catch the end of “The Odd Couple” (always a fun show) and then watch one of the original 39 episodes of “The Honeymooners”, followed by an original “Star Trek”.

Ah, the good old days. I think there was a boyfriend somewhere in that mix. I wonder what happened to him? Anyways, it’s fun to look back just 15-20 years ago upon television viewing habits and the fact that we weren’t assaulted with prescription drug commercials. “Can’t sleep? You need Lunesta.” I say drink a martini, count the fsckin’ sheep and hit the hay the good ol’ fashioned way.

Now that I think about it, I haven’t watched The Honeymooners in *years*. Like since 1990 or so! I don’t think Earl and I have ever sat down and watched an episode together. I don’t even know if we get WB11 here on DirecTV. Hmmm.

Back then I would tell others that cared that Audrey Meadows was the second Alice Kramden and that Pert Kelton was actually the first. I was obnoxious like that, spouting off facts that no one cared about. No one of my age believed me. “Pert Kelton. Pert Kelton? Who the hell is Pert Kelton?”. But there’d be someone older than me milling around at work that would show a faint familiarity with the name and would chime in to my defense. It’s not like there’s a bunch of actresses out there named Pert. Come to think of it, I think she’s the only one I’ve ever heard of. Who would name their daughter Pert? Wasn’t that a shampoo back in the mullet era?

I think I need to pick up a few DVDs of The Honeymooners. I have one favorite quote from the series:
Guest Star: “Mrs. Kramden, your husband is certainly a treasure.” (walks off the set)
Alice: “Yes, and if he keeps this up he’ll be a buried treasure.” (mocking the wife) Priceless! 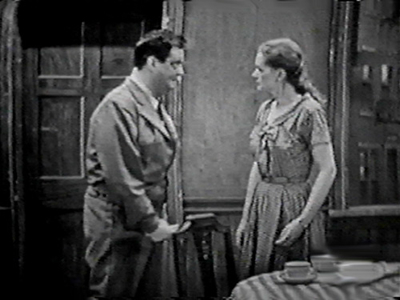 Jackie Gleason and Pert Kelton in one of the original skits. 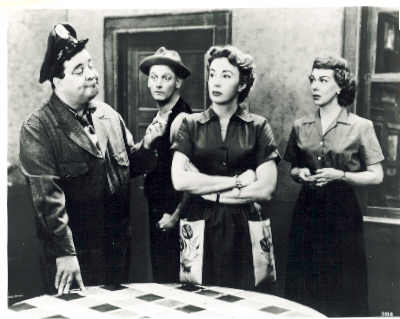 The familiar cast from “The Honeymooners”.