I finally got around to downloading and then uploading our vacation pictures from our trip in July. You can take a peek here if you wish.

Yesterday Earl and I hopped in the Jeep to spend an afternoon up in my hometown. I was a bad son in that I didn’t stop in and see my family, instead, we went to the Pulaski Field Days.

For those unfamiliar with the “field days” concept, let me explain. During the summer, volunteer fire departments in this area have a town carnival-type affair to raise money for the department. There’s a midway, games, raffles, lots of food and beer, and a parade through the Main Street area showing off area fire departments, marching bands and other civic groups. If you are a fan of the 10,000 Maniacs, you’ll note that they had a song called “Stockton Gala Days” – in Southwestern New York, they call the festivities “Gala Days”, up here in Central New York, we call them “Field Days”.

Anyways, Earl and I haven’t been to the Pulaski Field Days in a number of years. It’s always good fun in that we see quite a few people that I went to school with, a smattering of teachers, business owners and such. The last time we went to the parade was in 2000. Being the music teacher I aspired to be and the proud member of the marching band in both junior and senior high school, I was a little disappointed in the band’s performance that year. They didn’t seem as loud, choreographed or as polished that I remembered the band to be when I was in it. Of course, everyone tends to remember their formative years to be a little better than they probably were and I attributed my band memories to that.

This year, the band was very, very good. They are now led by a former classmate of mine, who is carrying on the legacy of our band director and his father (a former band director at a neighboring school) with pride and dignity. The band sounded good, they looked good and overall they performed well.

I may have lost touch with most of my friends and classmates from when I was growing up, but I’m still proud to be an alumni of Pulaski Academy and Central School.

Here’s some pictures of the band and colorguard: 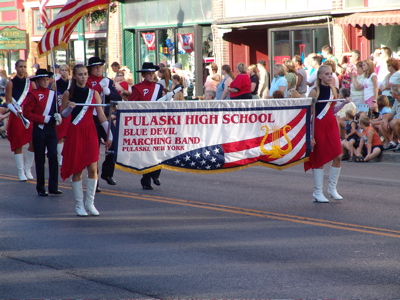 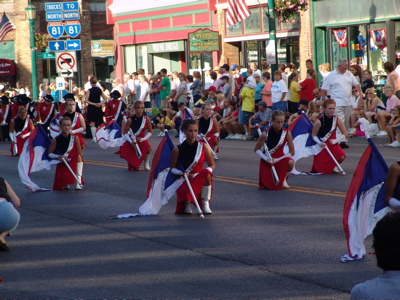 And here’s a picture of Pulaski’s “Main Street”, which is actually called Jefferson Street. It’s a quaint little village, not as bustling as it was back in the day, though. Most of the business has moved out to Rome Street to the various plazas and such. 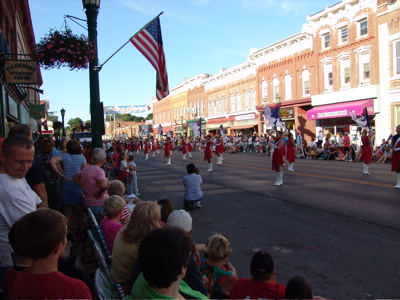 I know that it’s incredibly un-PC for me to say what I’m about to say but I don’t care, I’m going to say it anyway.

If people move to the United States, they should learn English. At least enough to get by.

I’m offended by this trend to bilingually label everything. Sears has all their department signage in both English and Spanish. Lowe’s does the same. Eckerd’s electronic signature pad devices are bilingual. Why? And why Spanish? We’re 100 miles or so from the Canadian border! If you’re going to bilingually label everything, shouldn’t it be in French? I don’t want to see a sign that says “Women’s Personal Items” in English, let allow Spanish as well.

There’s a chain grocery store here that does their announcements in English, then Spanish, then Bosnian (this area has a large Bosnian population). There’s hardly any time left for Muzak. But what about Polish? Or Italian? Or Cantonese? Or Chinese? The Chinese take-out place I go to doesn’t have a problem with me saying “Number 69 with pork fried rice instead of shrimp fried rice” in English. Sure, their menu has odd phrases like “We Delivery!” or “No Accept Check”, but at least they’re making an effort.

Yes, the United States is a great melting pot. But “back in the day”, those that migrated to our shores looking for a better life made an effort to speak our language. Sure, it’s heavily accented. Yes, they still speak their native tongue amongst one another. There’s nothing wrong with that. But when they went to the A&P or whatever, they knew enough English to understand when Mr. Whipple said “Don’t squeeze the Charmin.”

I’m not looking for conformity. I don’t expect everyone to be a happy Republican and speaking like Thurston Howell III. I don’t expect that. I just think that if you’re moving to the United States, you should make an attempt to learn the language.

Now mind you, I don’t have a problem with these phone systems that prompt foreign language speakers to select a menu entry to jump into their own language. Computer systems allow us the luxury of being able to do that, and that’s wonderful. Sure, I have to tolerate a menu fit for the United Nations simply when I want to let Verizon know how much they suck, but as long as I don’t have to hear the entire conversation bilingually, I’ll give into to that.

I think I’m getting cranky as I get older.