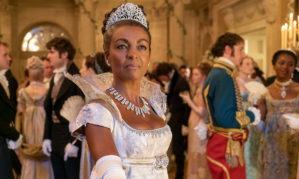 We are continuing our viewing of season two of “Bridgerton”. It’s not my favorite of the historical dramas; this season in particular was slow to grab my attention. However, the latter half of the season has picked up for me a bit and I am enjoying it.

I am particularly impressed by a few of the characters, including Lady Danbury portrayed by Adjoa Andoh and Queen Charlotte, portrayed by Golda Rosheuvel. Both are fine in their roles and I find them both enchanting. 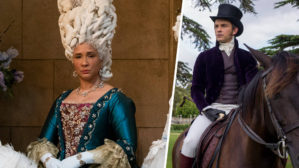 I don’t want to give away spoilers, but compared to season one, this season of Bridgerton seems a little less “steamy”. It is quite enjoyable nonetheless. Perhaps it’s trying to align itself with the likes of “Downton Abbey” a bit more. Earl doesn’t like when I ask about the fountains and the revolving stages in the early 1820s. He says I should just sit down and watch the show.

And that I shall.

When I was a young gay living in Boston (late 1980s), there were a couple of gay-oriented magazines that would have photographers milling around the bars on the weekend and taking photos for their publications. I never made it for one of my closeups back then as apparently I wasn’t photogenic enough for the use of the film.

Now there’s cameras everywhere with the vast majority of them on smartphones. Everyone has a camera. Still, there were one or two “event photographers” milling about the bar on Friday night. Some of the photos have come out today. Here’s one of them, with my husband and I standing with our friend Marshall (he’s the one in front) and a couple of other guys we were chatting with.

I took this photo during a Zoom call at work this afternoon.

A colleague at work asked what was going on with my mustache. He wanted to know if I was going to wax it into a handlebar mustache at some point. I told him it’d been about a decade since I had a big mustache and I was growing it out again to see how it looked and how much grey had moved into place. I’m not ashamed of the grey anymore as I have earned it. I didn’t think I’d ever make it into my mid 50s but here we are.

One of my uncles had some nifty muttonchops and a waxed handlebar back in the 1970s. I always thought that was a cool look, but I never mentioned it to him because we never saw eye to eye on anything. My dad was always clean shaven. Always, without fail. One of my city uncles always had a beard and another had a mustache in his later years and I found that nifty. The country uncles sported various facial hair configurations, usually around hunting season.

Growing out my mustache has been kind of fun and it won’t last forever but it’ll be around for a while. I have to keep a napkin in hand when I’m eating because I don’t like food hanging off of it, especially after I’ve left the table.

Our friends Homer and Matt have great facial hair. I’ve followed Homer’s blog for many years and I’m happy that we’re real life friends now. He’s interesting to talk to and interesting to look at.

I’ve always had an affinity specifically for mustaches. Back when I was in my later high school years in the mid 1980s many of my male classmates grew mustaches. I tried but it was hopelessly blond until I went away to college. It wasn’t until the latter half of my freshman year of college that you could actually see my mustache. I guess the red mustache was only destined to last a few decades before going to grey.

Of course, my husband always has facial hair of some sort and that is most enjoyable to me. In fact, until recently I was the only one in our family of five that was clean shaven. That’s no longer the case. I feel a little less out of step with the rest of the family.

When I talk to my mom we use FaceTime. On a recent call she noticed I had grown a mustache. The current mustache has actually been around for six weeks, but I’ve been letting it get a little longer than I’ve kept it for the past decade or so.

It’s been 10 years since I had what some called the “Epic ‘Stache”, which was that big thing I had on my face for a number of years. The mustache was inspired by a similar style on two different men I had crossed paths with. The first was the daily delivery guy who would drop off Airborne Express packages at the radio station and I’d spy his smile under his big mustache. His name was Chris. The last time I saw him was probably in the year 2000; we were at one of the buffet places and he was with his family. He came over to hug me and he was very nice. I wonder if he’s still alive and kicking and if so, I also wonder if he still has the big mustache.

The second man was Dan, who was new to the gay campground we used to go to back in the day. We had met shortly after he’d come out of the closet, was still processing the subsequent divorce, and we had a nice chat amongst all the rowdiness around the campfire. I know he eventually worked at the campground but we didn’t go down there as much so I haven’t seen in him about 12 years. I hope he’s still alive and kicking and doing well.

Anyways, I’ve felt the need to grow the bigger mustache again and it’s coming along much more grey than I remember it being the last time I had a mustache. I’m OK with. I’ll officially be in my mid-50s this year so the grey is not unexpected. I’ve earned it, and since I can’t show it off on top, the least I can do is show it on my face.

As a kid I didn’t fully comprehend the joke in this beginning of this clip from “Bewitched”. Once I became aware of my surroundings, to the extent that I’ve done such a thing, I’m surprised this joke made it beyond the censors in the late 1960s.

Sometimes I just enjoy a photo of a shirtless man caught shaving. Although the OCD in me notices that his shaving cream is way too dry for an effective shave.

I used to be concerned about reaching middle age. Instead I revel in it. I’ve earned it.

The short lived “V:The Series” in 1984 rapidly turned from an allegoric sci-fi mini series about Nazi Germany to Dynasty on a a space ship. For some reason I thought of this series this morning. Here’s a clip of Alexis and Krystle Diana and Lydia and one of their cat fights.

It seems like only yesterday that I was 28 years old, dancing bare chested with my new 36 year old boyfriend, amongst a campground of other bare chested men to this new song by Cher.

I don’t know why this came up in my YouTube suggestions today, but it looks like some bitchy fun.