I recently did a photoshoot with my long time photographer friend Kevin and his studio partner Dale. Kevin uses a digital camera, Dale uses film. Kevin brought over a DVD of over 100 photos that he shot, I thought I would share a sample here on the blog. Click here to see a couple of the shots.

I like to indulge my vanity once in a while. 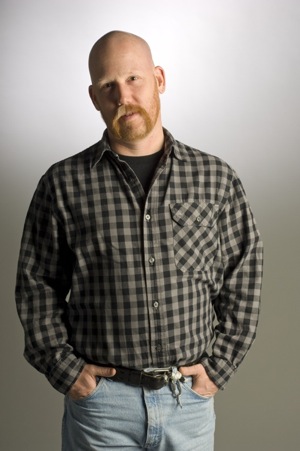 So I’m home this afternoon, burning a little comp time from the last round of on call when I find myself in a little bit of a funk. Recovering from a spectacular weekend has it’s disadvantages, one being that it’s not good to leave half of your luggage at the house of your friend in Connecticut.

Some snow fell during the weekend and the driveway was in serious need of cleaning out. That in itself is to be expected in these parts; we are known for our substantial snowfall this time of year and it’s not uncommon to have to clean out the driveway four or five (or even ten!) times per week. So I got the snowblower out and did the deed of walking back and forth.

Still in a little bit of a funk because my weekend is now officially over and half of my luggage is still in Connecticut, I decided to get silly and do something I had never done before to lift my spirits.

I put on shoes with very little tread left, saddled up the snowblower and cranked it up to high gear. This in turn dragged me along like I was being pulled by a team of sled dogs at a very rapid rate. Having a rather long driveway that has a coating of ice under the latest snow fall makes the mechanical dog-sled ride that much more fun. The neighbor (the one who hasn’t changed his address to his new home in five years) was shoveling and did a double take to see what the hell I was up to; I took the opportunity to wave back at him like I was being pulled across a lake by a speed boat and waving at the competition judges. I wasn’t wearing a bathing cap.

All in all the mechanical dog sled ride on the shoes with no treads improved my mood greatly. I feel I can face the week now.

Let’s make some popcorn together.

Lately I’ve been inspired to pursue my long buried musical aspirations. Between the piano getting fixed up and the prompting from several that I should start singing again (outside of the shower), I’ve been timidly looking around for something fun to do to see if I can handle being on a stage again without dying of fright, whether it be community theatre, a gay men’s chorus or going somewhere for karaoke night (Guinness optional).

One of my favorite musicals of all time is “Rent”. I love each piece of the production and I often sing selected songs from the soundtrack during my commute to school. I occasionally amuse myself by watching local community groups perform songs from the show. Due to some of the content and lyrics of the music, “Rent” is not a show you often see performed by high school drama clubs. However, once in a while a rogue, daring music teacher will make the leap with interesting results. During my latest look through YouTube, I got a kick out of a change in lyrics to “La Vie Boheme”.

To hand-crafted beers made in local breweries
To yoga, to yogurt, to rice and beans and cheese
To Oprah, to milk duds, To curry Vindaloo
To Huevos Rancheros and Maya Angelou

I’m curious if the script was changed before or after it was practiced in the high school auditorium. For some reason the change just cracks me up.