I’ve mentioned before that I’m not a fan of advertising. Not only do I not like advertising, I actually despise it. I realize that in today’s economy advertising is basically what keeps the United States afloat, but I think that we, the public, are better than dancing purple pills, people screaming “Huuuuuuuuuge”, men that call themselves Crazy Eddie and long lists of side effects that usually include “explosive diarrhea”, even though the medicine being hawked is suppose to make us feel better.

New York State Governor Cuomo (I like to call him “King Andy”) looked around The Empire State, realized the economy was not doing well and decided to fix the situation by inviting tourists to come take a look at all New York State has to offer. He recently launched a $25 million ad campaign that involves celebrities saying how much they love New York and more importantly, signs telling everyone how lovely New York State can be.

Usually when one crosses a state border they are greeted by a sign of some sort welcoming them to the state they have just entered. “Welcome to Connecticut, Full of Surprises”. “Welcome To Pennsylvania, State of Independence.”

Crossing into New York State you are now greeted with a succession of FIVE welcome signs. But that is only the beginning of the frivolity, as the state border is not the only place you can enter the Empire State.

You’ll see the same five signs coming out of the airport as you try to figure out how your rental car works.

You’ll see the same five signs in the geographic center of the state.

You get my point.

Yes, there are signs 200 miles from the closest state border welcoming you to New York State. Over one third of the bridges might be structurally deficient, we might have the only interstate exits in the country that are still numbered sequentially (for example, 20-21-21B-21A-22), you might lose a wheel or two in one of the wide selection of potholes we offer in any given mile, but by god, we have signs welcoming you to the Empire State.

Think I’m kidding? Here’s some screen caps of the signs, 260 miles from the state border. 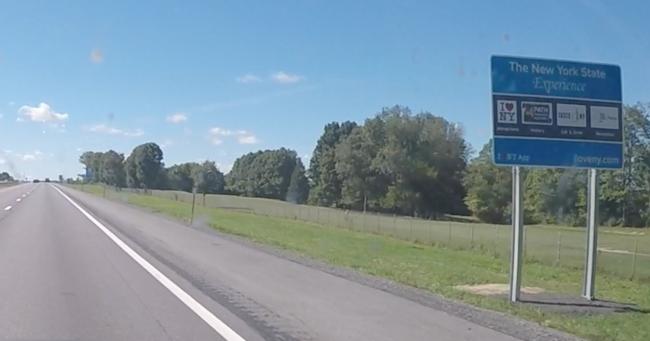 Please note that all the signs are encouraging you to download the ILoveNY app, apparently while you’re driving. At the very least, visit the website. Never mind that we spent a million or two a few years ago renaming all the Rest Areas to Text Stops (with more signs counting down the miles to the next “Text Stop”). Oh! And speaking of advertising, all of our Text Stops are now sponsored by Geico.

With more signs advertising this fact.

To keep with the theme of banging motorists over the head with advertising, there are now miniature versions of these signs mounted to the toll booths as you enter the New York State Thruway.

I was especially disheartened to see these new toll booth advertisements because I was kind of proud of the fact that we didn’t pimp out toll booth space for advertising like the surrounding states did. But apparently what’s good for the goose is good for the gander or the very least to get my dander up.

I wouldn’t be nearly as bothered by all these signs (and the money associated with them) if they were installed and left as is, but apparently they did please the aesthetic sensibilities of someone and they have been moved around (by a mile or two), replaced (because the color was off in the original version) and re-angled in relation to the roadway on the weekend, in the dark of night, during prime overtime hours. Driving home from a late flight into Syracuse on multiple occasions in the past couple of weeks I saw the crews installing, uninstalling and such under the cover of darkness.

Advertising is in it’s prime. In glorious overtime. I Love New York. Sigh.