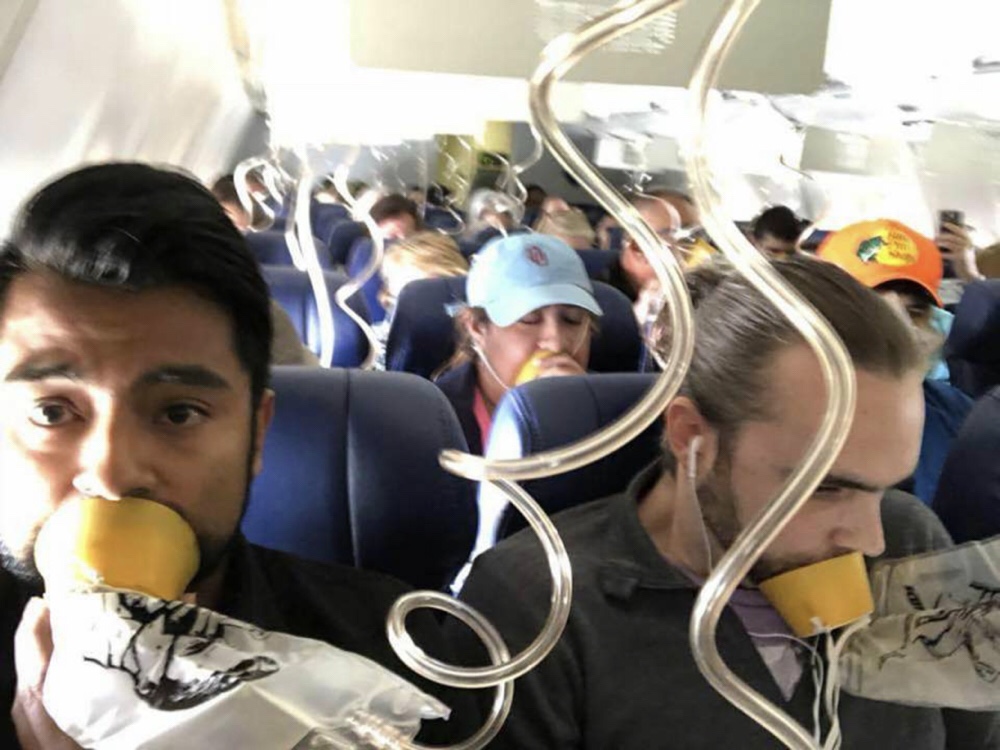 This photo has been making the rounds on the Internet for the past two days. It was taken aboard the Southwest Air flight from New York to Dallas that lost an engine, which took out a window, causing a rapid depressurization of the cabin of the Boeing 737. One passenger was partially sucked out the window and unfortunately did not survive the flight. The captain and first officer safely landed the airplane in Philadelphia.

I immediately noticed the three folks using the oxygen masks in the front of the photo were wearing the masks wrong. I also wondered, who was time to take photos when an airplane is in an emergency descent with a hole in the side of the fuselage?

It’s very important to pay attention to any safety demonstrations or information on every flight. I don’t care if you’ve flown the same route on the same kind of airplane every week for the past decade. The flight attendants are taking the time to educate every passenger on how the safety equipment of that particular airplane works and where to go and/or how to potentially survive an emergency. You may be the seasoned traveler, but the people around you may have no idea on what to do. You might need to help someone. Pay attention, every single time.

I am a private pilot. I fly airplanes. Every time I take a passenger up I review the safety features of the airplane I am flying. Even when I’m flying a flight instructor, I ask them if they have any questions about the the operation of the safety equipment in the airplane. I’ve watched airline pilots flying in the back of commercial flights. They pay attention to the safety briefings.

You need to as well.

I’m still a little surprised that people were taking photos while the airplane was in the middle of an emergency. The cynical side of me wondered if someone saw a cash opportunity by selling the photo to the media. I hope that wasn’t the reason for taking this photo. But I’m still really stunned the three people shown using their masks were using them wrong. You can even see the picture on the bag under their nose that demonstrates how to use the mask. I’m sure it was covered at the beginning of the flight.

Kudos to the captain, first officer and rest of the crew for doing their job, doing it well and bringing the flight to a safe conclusion. RIP to the passenger that lost her life when pieces of the engine came through the airplane.

Please, pay attention to the safety instructions, every time you fly.