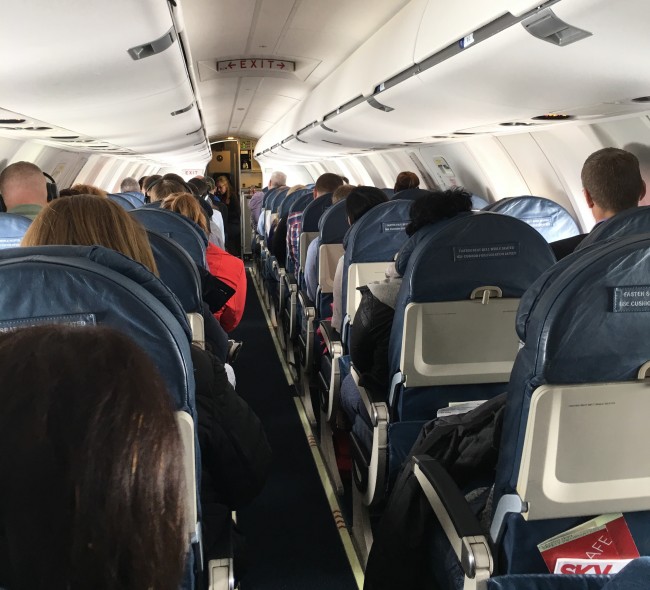 Earl and I just finished a flight from Syracuse to LaGuardia. The flight was on Delta, the official airline of our family. Since Syracuse is insignificant in the commercial airline world, we get the express version of Delta whenever we are connecting to a hub. Today’s flight was on a CRJ200. It seats 50 people.

Before takeoff, the lone flight attendant advised that we needed to redistribute some of the weight in the front of the cabin. She needed three volunteers from the first four rows to sit in the back just for takeoff, then we could move back to our seats.

As a good citizen trying to set an example for all, I obliged. I moved to the very last row and sat next to a woman who was quite nervous. She asked why we moved and I told her we needed to meet weight and balance requirements of the airplane for takeoff. I used my pilot voice and everything. I told her I’d be there for just a minute and would be moving back to my seat after takeoff.

It’s been a while since I’ve purposely sat in the very back on a commercial airliner. It was kind of fun, though I missed being up front with Earl. When you’re traveling with your spouse, it’s always good sit with them.

All in all I didn’t mind being ballast for a few moments. I enjoyed walking back through the cabin when the flight attendant gave the all clear signal. People might have whispered about me for a nanosecond. I like the attention. I wore my AOPA cap so they would know that I was involved with aviation.