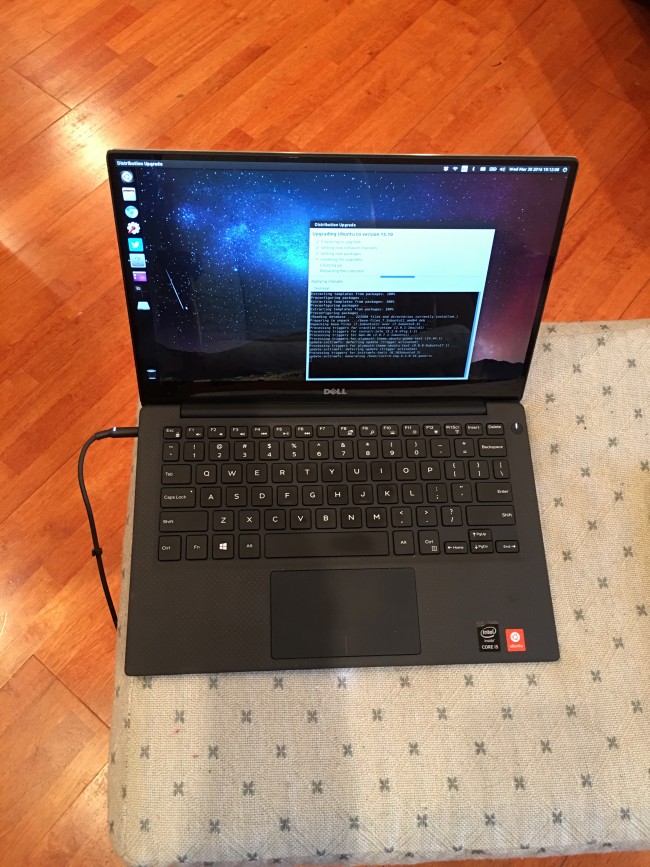 As I type this, Microsoft is having some sort of big event somewhere in the United States. I’m seeing quite a few posts about it on Twitter. Mentions of Microsoft’s Hololens being used on the International Space Station, discussions of the integration of Linux into the Windows platform and partnerships between Microsoft and Linux company, Canonical and being discussed. As a person who has not owned a Windows machine in almost a decade, I’m finding this all quite interesting. Are we finally getting to the age where information is freely exchanged between computer systems, regardless of who’s hardware and software you are using? I certainly hope so.

I recently purchased a new laptop. It arrived just before our trip to Florida last week and I wisely decided not to bring it along because I didn’t want to fiddle with my new toy while I could be dancing in the streets with Mickey and Minnie and spending time with my family. So it wasn’t until this week that I’ve gone full-tilt with the new laptop and I have to say that I am loving it. A lot.

Here’s the kicker: my new laptop is made by Dell. It is not an Apple device.

That’s right, I decided to purchase a Dell XPS 13 Developer Edition laptop. It runs Ubuntu Linux and it was designed to do so, so it has pretty much been a plug ‘n play experience for me. While I’m re-acclimating to living outside of Apple’s wall garden I’m finding that there are some really cool things out in the technological world. Apps that interact with one another. Digital assistants that are a little more intuitive than Siri. Predictive behavior instead of adaptive behavior.

Now, don’t think that I’ve become all anti-Apple, because I haven’t. I still maintain that Apple makes beautiful products that do amazing things and they have definitely pushed technology forward, especially up until a few years ago.

But I don’t know that they’re still pushing the envelope like they used to. Oh, I know that the iPhone 7 is rumored to not have a headphone jack, so you’ll either need an adapter or use a wireless headset with your iDevice, but I don’t find that change to be as revolutionary as getting rid of floppy disks or anything like that.

In today’s world of touch enabled everything, I really like the fact that I am able to touch the screen on my new laptop if I so desire and have the screen respond. I can scroll. I can touch buttons, I can do all of that. It wasn’t a necessity but it’s a nicety that I really enjoy and find that I miss when I use my MacBook Pro (which I still have). Apple refuses to put touchscreens on their laptops because they want you to buy another device, an iPad or an iPad Pro. The thing about that is that you’re then locked into apps instead of having an actual computer at your disposal. I honestly think that Microsoft’s “Windows on everything” and Canonical’s similar approach are both more forward thinking than having users buy, carry and use multiple devices.

In an ideal world, I want my smartphone (whether it be an iPhone or whatever) to be my computer. Set it next to a keyboard and monitor and it works like a regular computer. I want the ability to “fling” things from my smartphone up onto a wall display at a meeting. The accumulated time I have spent futzing with LED Projectors and matching settings and the like with my computer has been maddening. I want to flick, talk and go.

Having a touchscreen on my laptop is definitely a step in that direction.

Dell also makes a Windows 10 version of this awesome XPS 13 laptop. I really like the build quality. I really like the “infinity display” where the screen goes to nearly the edge of the bezel, though I don’t really care for the relocation of the webcam down into the lower part of the screen (because the screen goes all the way to the top edge). The XPS 13 is light, powerful and comes with enough ports and doo-dads to make it quite versatile. I’ve been a Linux guy since the mid 1990s and though I’ve been using Apple products for the past 10 years, I can’t help but be impressed by how far Linux has come along with the desktop experience.

After Apple’s mediocre announcement of the iPhone SE and something else that escapes me at the moment, I knew that looking outside of Apple’s “walled garden” to other ecosystems and manufacturers might lead me to more innovation, larger technological leaps forward. At the very least, having my data free so that’s not tied to Apple devices has opened my eyes up a bit.

I might get to flick a presentation up on a big glass display sooner than I thought.