So last night I updated my Facebook status with a blurb about Earl and I yelling and screaming and Earl telling me to go get something at Wawa, which is 275 miles away from our house. 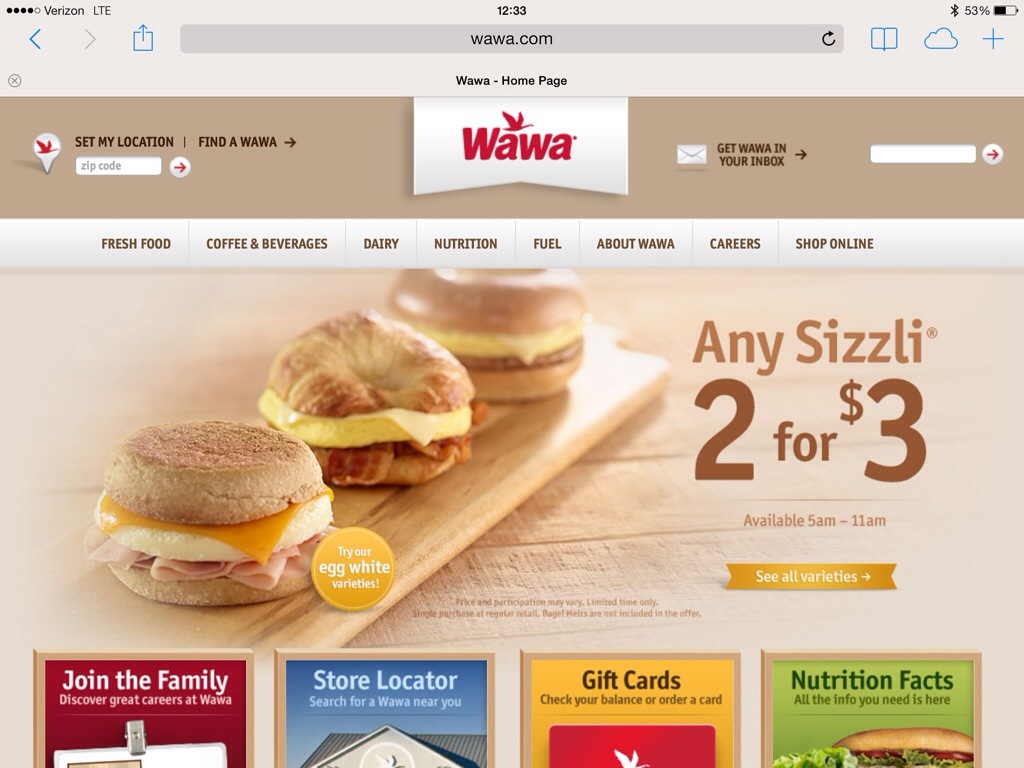 The Facebook status was meant to be humorous, but judging by the number of folks that have reached out to me today to see if I was alright, I thought I should probably set the record straight:

1. Wawa is a convenience store chain in eastern Pennsylvania. Apparently, kind of like the great “soda” vs “pop” debate in Upstate New York, Pennsylvania folks are split between Wawa in eastern Pa and Sheetz in western Pa. The reason Earl told me to go to Wawa is because as a lower Bucks County, Pa. native, when we are arguing he can slip into his near-Philly accent, and Wawa is part of that vernacular. In reality, he meant he wanted me to go the Fastrac that’s a mile from the house (for some sort of treat like a KitKat or something) but Wawa just came out of his mouth. It’s like the occasional glass of wooder we enjoy from the tap.

2. Earl and I have been together for over 17 years and while we have had our share of disagreements, it is rare that we fight. Now, Cub has probably seen most of our fights as we have tended to get more set in our ways as we get older (I’ve threatened him with shoving his wheelchair somewhere when he’s that old), but like any married couple we can get cantankerous as we are having a discussion. It probably doesn’t help when I tell him not to be “so AARP about it” or “stop acting like you’re 50s old”, but that’s what he gets for marrying a youthful lad such as myself. Cub just shakes his head at the whole thing. Anyways, any real fight we have had has been executed in silence, I yell and he tells me not to when we’re having a disagreement.

3. Last night I went to upgrade Earl’s iPhone 4S to iOS 7 (like the dutiful Apple soldier that I am) and partway through the process, the ghost of Mr. Jobs informed me that Earl didn’t have enough space on his phone. It turns out he had NO space on his phone. In the process of deleting photos and music that had been backed up this iCloud, while foolishly making sure nothing was lost by plugging his iPhone in so it could sync with iTunes, I confused the ghost of Mr. Jobs and his iPhone 4S didn’t know what to do. So it had some sort of hissy fit and decided to show its Apple logo and nothing else. I ended up having to wipe out his phone completely and reloading it, but only after following some poorly produced video on YouTube that was suppose to help me do everything aside from wipe my butt properly. The video told me to hold in the volume up button until the logo went away. 10 minutes later and after sizable dent was permanently installed in my finger, no dice. This created panic mode. Sometimes I think it’d be easier to defuse a bomb in Afghanistan instead of working on someone’s iPhone when they think they’re losing something, because folks just lose it. I’ll jump on the bomb in the future.

4. Lastly, while waiting for Earl’s refreshed phone to return to normalcy, I suggested that he might want to clean up some of the photos and music on his phone. He pointed out that his iCloud account had plenty of space and why didn’t I just use some of that. Technobabble flew out of my mouth in typical geek fashion for a few seconds but then I stopped, counted to 10 and started talking about apples and oranges. That’s when the pitch of my voice went up a bit and the volume went up a little bit and then I reminded him that he exceeds me in IQ, SAT scores, age and weight and that he should know this. (I beat him on the ACT, apparently). That’s when the Wawa comment came out and we both laughed when I said, “Wawa? I hate Wawa and the closest one is in the Poconos!”

We had a nice laugh together and decided that we’ll drive to the Poconos so we can go to Wawa this weekend.

After I update his phone.