Back when I was a kid there would be much excitement with the arrival of the Sears “Wish Book”. It was fun for the whole family. 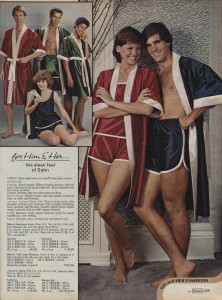 I would flip through the Wish Book and come up with ideas for my Christmas list that Santa apparently wanted to see. Then magical people would run off with the magical list and on Christmas morning there’d be one or two items from the Wish Book under the tree, though I think Santa went to J.M. Fields instead of Sears, now that I think about it. Sears was kind of fancy for us.

Anyways, as I mentioned yesterday, I have been asked by a couple relatives as to what I want for Christmas and though I always answer, “nothing, really”, that’s not the answer one expects, so today I went and made myself an Amazon Wish List.

Now, I think that composing an Amazon Wish List is kind of crass. Truth be known, I find it wicked crass, but it appeals to my organized/OCD side. It’s functional. It runs way too close to that whole “gift registry” thing that people do when they’re getting married and I’ve never been really comfortable with that whole thing either (though the software that runs gift registries is kind of nifty). So I have an Amazon Wish List and I’ve even posted it right here in the right hand column of the blog. Not because I want people to buy me things, I REALLY don’t want that, but I thought it’d be very 21st century to share my Amazon Wish List so that one could get a different perspective on my personality. Well, at least the parts of my personality that I want to be public. I

If one really wanted to buy me a meaningful Christmas gift, it would be a donation to the Ali Forney Center. That would make me really happy and be more in the true spirit of the holidays as far as I’m concerned.

It was much easier flipping through the Sears Wish Book.