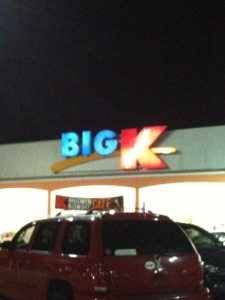 I just had the oddest retail experience at our local Kmart. I’m sorry, it’s actually a Big K, though I don’t know by it’s called that as the pharmacy, garden shop and cafe have been mercilessly ripped out of the place and to add to the deserted ambiance, there is a swath of empty aisles along the back of the store.

There was only one checkout open. Behind the check stand of register 7 stood no cashier, instead, plopped onto a stool was Albert. He seemed a friendly sort, though I think he had been screwed down to the stool. Because Kmart, I’m sorry Big K, does not have automated belts on their registers, he beckoned to me to slide the items down. He did not use the built in scanner designed for maximum efficiency and cashier comfort, instead he opted to use the gun usually reserved for the likes of kitty litter and lumber.

When asked my phone number so I could add the order to the rewards program, though I have no idea what the rewards are, he broke out into hilarious laughter when I gave him my Google voice number, a number based in Buffalo. Apparently my name, combined with Buffalo is fall down but not off the stool hilarious. He asked how it was in Buffalo. Apparently he’s never left the stool to go there.

As he gunned my order he just slid the items down to the bagging area and then asked me to bag it myself, lest he get off the stool.

I was kind of in a state of shock with his level of customer service. But, he did remember two important things: 1. He asked me if I wanted to put this on my Sears charge (I replied, absolutely not until Mr. Roebuck is reestablished with the company) and 2. TYFSAK, “Thank you for shopping at Kmart”.

I miss when the savings were amazing at Ames.

I’m sitting here in the kitchen, taking a break from the workday and eating my lunch. I’m still trying to eat healthy and the scale has not been kicked across the room in a while since I began this effort the last week of August. That’s a good thing. I worry that the BMI scanner doesn’t work properly when the scale is kicked across the room like a field goal attempt between the sinks.

The house is quiet today. I find this a little surprising, since Earl is in Memphis through late tomorrow night, but Scott is here until tomorrow afternoon and Jamie is doing his usually Wednesday business about the house. Right now it’s a matter of getting his truck fixed and Scott has gone to pick him up (I almost wrote ‘gone to fetch him’, but I thought that would sound haughty), so other than me the house is empty and I’m just listening to the hum of various appliances and the click click of the clocks on the minute. Even Tom is enjoying some fresh air on the front porch.

This morning I saw a mention of something called a “Honey Boo Boo” on Twitter and I had no idea what the person was talking about. As I type this, someone with the Twitter handle @hotdesigner just informed me that BooBoo is a tubby reality child star. I wonder if that’s something like the 1993 pop sensation Jordy with “Dur Dur D’Être Bebe”. Actually, I don’t really wonder it all because anything that is called Honey Boo Boo is certainly not worthy of my attention. It’s kind of like this fad called a Kiki. I was told that a kiki was a party meant to calm my nerves. There are fewer things I find grating in this world than people piling into a gathering called a kiki. I didn’t even really care for Kiki Dee, why would I want to go to a party in her honor? I find the whole thing dubious at best.

I’d rather calm my nerves by enjoying the quiet.